If you love war movies, then you will enjoy the latest one, Munich-The Edge of War. The movie was released in January 2022. Netflix has its collection of war movies, however, this new movie has managed to bring a new perspective, or rather a spin on the original story. So, if you are confused by the ending of the movie, here we are with the Munich- The Edge of War Ending Explained.

As we mentioned before, it is another World War II movie, and of course, you might think how many of them we are going to have? Well, sometimes there are exceptionally well-made war movies that capture the moods and emotions and all the atrocities exceptionally. However, there are some interesting movies out there that come up with some new theories which make the movies quite interesting. Munich – The Edge of War is such a movie, which has some interesting theories which could be true or may not be. Yet we know that it is adapted from Munich, which was written by Robert Harris.

Munich – The Edge of War Plot

Of course, before we get into the ending, let us have a look at the plot of the movie. As you might have got the idea from the name, it is about Munich Agreement that took place right before Hitler had attacked Czechoslovakia. The movie revolves around the whole situation but with some new differences and a new perspective that might be a possibility in the actual history, but perhaps it did not get recorded in the mainstream history books. The story begins with two friends Paul von Hartmann, a German, and Hugh Legat, a British. Both of them serve their governments. Soon, the world is facing a threat by Hitler’s conquest of lands around him. This delicate situation has to be dealt with by the British government to keep Europe integrated.

However, Paul, in the meanwhile, wants to expose Hitler’s evil intentions to the British Prime Minister, Chamberlain. Soon, Paul finds a specific document where Hitler’s plans were made. With help of Hugh, he manages to reach Chamberlain. However, Chamberlain is fixated on allowing Hitler to go for Sudetenland. This brings in the time when Britishers had started to give in to Hitler’s demands to save Europe so that a war does not break out again.

Also Read, After We Fell Ending Explained: What is in store for Hardin and Tessa?

As we come close to the end of the movie, we come across an incident where Paul wants to know to kill Hitler because of political and personal vendetta. He also got the opportunity as he had a meeting with Hitler in a closed room. Yet when he had a gun in his hand, he could not do it because of a moral dilemma. This was quite a turning point in the movie. Paul faces a moral dilemma while murdering Hitler, as he will not resort to such low degrees for his gain. If Hitler is doing something evil, he needs to be punished by everyone, and not just him.

As they go out of the room, Paul remembers that the document might be discovered by now and goes out of the room waiting for his doom. However, as he goes out, he finds out that one of his associates has managed to hide away the documents. Therefore, Paul gets to save his life, just like he had spared Hitler’s life. This does feel a bit like a moral story in the end, however, the British and Germany signed a peace agreement, where the British will not attack Germany, and in turn, Germany will not attack any of the British’s allies. The rest of it is just history.

The Munich agreement lasted for only a year, after which Germany attacked Poland, the British had to get involved and then started what is known as World War II.

Munich- The Edge of War Streaming

An interesting fact about the movie is that it was first premiered at BFI London Film Festival in 2021. However, now you can watch the movie on Netflix. No other streaming platforms have yet taken up this movie. 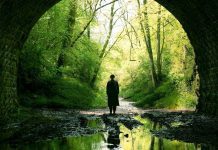