The upcoming KBS's Moonshine reveals the love story of people from the Joseon period when alcohol is strictly forbidden. However, what will you do when you find a stash of hidden alcohol? Find out how Yoo Seung Ho and Lee Hye Ri hide this secret in Moonshine kdrama. 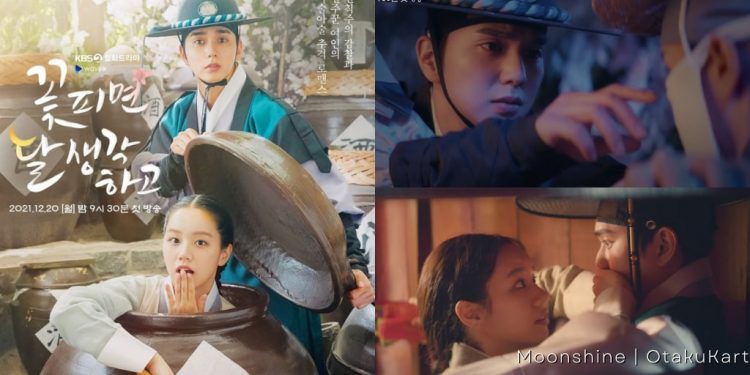 Finally, KBS2 has announced the release date of Moonshine kdrama! Therefore, fans should get ready to welcome a new funny duo who will fill two days of every week full of laughter and heart-fluttering romance! The upcoming drama ‘Moonshine,’ also known as ‘When Flowers Bloom, I Think of the Moon’ stars Yoo Seung Ho, Lee Hye Ri, Kang Mi Na, and Byeon Woo Seok. It is exciting to see Seung Ho and Hye Ri in a comical romantic pair. After all, their off-camera chemistry is undeniable, which you can see during their script reading event. Hence, their on-screen chemistry will be on a whole new level!

The upcoming kdrama Moonshine is a historical romantic comedy tale of four people from the Joseon Era known for the strictest alcohol prohibition law. Kim Joo Hee writes the story, and Hwang In Hyuk directs the drama. Four people from different class standings get tangled in the mess of a secret. If the secret gets out, all will have to lose their heads! Can they keep it hidden from the world, especially from the Joseon magistrates? Or will they face new problems while trying to hide this secret? What is this secret? Uncovers this comedy-action mystery in the upcoming Moonshine kdrama!

Many people may not know but, Moonshine is referred to as alcohol in the historical period of Korea. Therefore, Moonshine is not the Moon’s glow but is alcohol here! The kdrama Moonshine is set in the Joseon dynasty, especially during a period, which is regarded as the strictest alcohol prohibition law! Thinking about Korean historical drama without alcohol seems a foreign idea even for international viewers. However, this drama will show a different side of the Joseon Era.

Moonshine narrates the tale of four people Nam Young, Kang Ro Seo, Lee Pyo, and Han Ae Jin, whose lives change because of the alcohol prohibition law. Each one of them has a story to tell you. For example, Nam Young is an inspector who leaves his hometown to gain fame in Hanyang. Meanwhile, Kang Ro Seo is an impoverished aristocratic lady who makes Moonshine to pay off her family debt. Then there is the crown prince Lee Pyo who craves alcohol like water.

Their lives get tangled after a fateful encounter, leading them to discover a hidden stash of alcohol! During the strictest alcohol prohibition law period, revealing this secret could only mean cutting down their own throats! How will these three manage to keep this secret? Will they catch red-handed? Find out how will the action-comedy journey begins with love blossoming amid this mess in Moonshine kdrama!

Just like the intricate romance-comedy plotline, the cast members of Moonshine will be bringing different charms to the kdrama! As for the main leads, the drama stars Yoo Seung Ho as Nam Young, Lee Hye Ri as Kang Ro Seo, Byeon Woo Seok as Lee Pyo, and Kang Mi Na as Han Ae Jin. Yoo Seung Ho previously worked in Memories and My Strange Hero, while Lee Hye Ri acted in My Roommate Is a Gumiho and Reply 1998. In the previous dramas, both leads have delivered remarkable performances.

Therefore, fans should look forward to their upcoming couple role! You can get a glimpse of their on-screen chemistry during the script reading, where all leads perfectly blended in their roles, giving off sparkling vibes! Besides the main stars, the supporting cast members include Jang Gwang as Moon Yeon Jo, Choi Won Young as Lee Shin Heum, Im Won Hee as Woon Shim, Moon You Kang as Shim Heon, Park Ah In as Lee Dong Hee, and many more.

Moonshine, also known as When Flowers Bloom, I Think of the Moon, will be released on 20 December 2021 on KBS2. The kdrama is set for 16 episodes while each episode runs for 1 hour and 10 mins duration. It will take Monday- Tuesday time slot on the KBS2 network, filling your first two days of each week with bubbling romance and comedy!

KBS has already dropped various trailers of Moonshine kdrama. Each trailer gives off different feelings. The first and second teasers reveal the main issue, which all leadings will be facing in the drama, the alcohol prohibition law! We will get to see how Seung Ho and Hye Ri battle against the law system of the Joseon period while love eventually blossoms between the two. However, the journey will not be as easy as it may appear to be. Both will have to go through a fair share of obstacles before their love blossoms into a beautiful flower. Meanwhile, the third teaser shows how their love story will be full of twists and turns, such as in the beginning, Hye Ri will dress as a man to hide her identity and so on. To find out how the love tale will lead, watch Moonshine kdrama on 20 December 2021 on KBS2!

Also Read: 31 Best Romantic Korean Dramas of all the time.