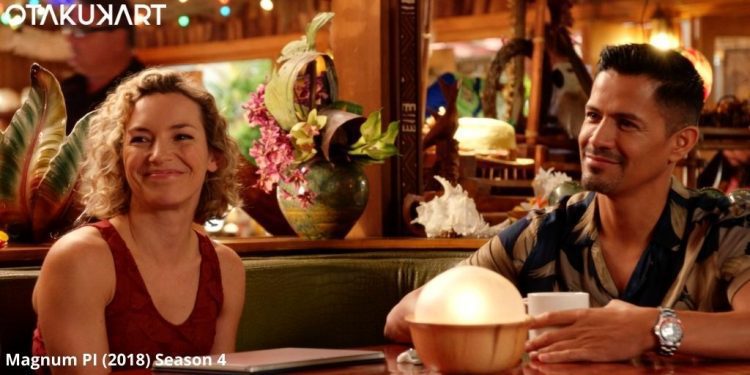 The thrilling factor is going to rise up in Magnum PI Season 4 Episode 11 as Thomas, Higgins, and the HPD face a difficult situation. Whereas the previous episode took a drastic turn from regular investigation to revealing a major scandal. The episode gave us a look at Higgins and Thomas investigating a client’s husband to find out if he was having an affair with someone else.

Meanwhile, the two of them got a new client, a woman named Emily, who was looking for a man she met at a coffee shop. But what made the case more interesting for Thomas was the fact that Emily felt a connection to this man and was willing to go the extra mile to find him, which was quite a romantic gesture in his book. On the other hand, Thomas had to get Rick’s help to serve a summon regarding the first case as he was now involved in Emily’s case.

Although, the biggest highlight of the episode was the intimate moment between Higgin and Thomas at the beginning. But what happened after that? The American television series has returned after almost a month’s break, and the fans are eager to watch Magnum PI Season 4 Episode 11. However, let us take a look at what all happened in the previous episode.

Episode 10 of Magnum PI Season 4 dropped on 7th January 2022. Moreover, the episode was titled “Dream Lover” and the episode began with one as well. We saw Higgins and Thomas on a boat where they were about to share a kiss. However, Higgins soon woke up, and it was none other than a dream. But Thomas got curious about her dream as she was sitting right beside him in the car working on a private case.

He tried to ask her about it, but she changed the topic, and they focused on the man named Jared showing up at his girlfriend’s house. Furthermore, they took photos of him getting intimate with his girlfriend as proof for their client to show that her husband was cheating. The next morning, a woman named Emily came to meet Higgins and Thomas to give them her case. She wanted them to find a man named Mikal, whom she met at a coffee shop and had a very good conversation.

Additionally, she felt a connection to him, but since he left in a hurry, she didn’t have any way to contact him. Thomas was quite intrigued and agreed to take the case. Although, before leaving, he asked Rick to serve the divorce papers to Jared from his wife. While on their way, Thomas again mentioned Higgin’s dream to her and got her to confess that it was him in her sexy dream. But he assured her to not feel embarrassed about it. After reaching Mikal’s location, they met the real Mikal and found out that the man Emily met had made a deal with Mical to use his name. But Emily still wanted them to continue the investigation and find him. Eventually, they did manage to get his real identity, but things took a dangerous turn. It turned out that the man Emily was looking for was named Mason, and he had been abducted by some men from a company run by Shane Whelan.

More interestingly, Shane was an ex-cop and Gordon’s old partner that broke his marriage. Therefore, Gordon eagerly got involved in the case as well. Later on, Thomas and Higgins found that Mason was trying to expose the company that was responsible for his sister’s death and many others. This got Emily in danger as well since Shane’s men went to her to find the SD card that had the secret files Mason recovered from the company and slipped it into Emily’s purse when they met. However, Thomas and Higgins got there on time and saved Emily. Meanwhile, Shane arrived there with Mason and struck a deal with Thomas. Shane let Mason go in return for the SD card. Although, Thomas tricked Shane and gave him a different card, and exposed the company. In the end, Gordon gladly handcuffed Shane and arrested him. On the other hand, Rick served the divorce papers to Jared after several unsuccessful attempts.

“Magnum PI Season 4 Episode 11 will release on 14th January 2022 at 9 pm ET on CBS.” Meanwhile, the episode will be titled “If I Should Die Before I Wake.” The episode will get quite thrilling with a hostage situation at a veterinary clinic. Whereas Thomas will get another investigation case from a nun. We will also see Rick trying to get in touch with Suzy. So stay tuned for yet another exciting episode.

The current season of Magnum PI has managed to create a good amount of buzz among the viewers. Therefore, they are eager to know where to watch Magnum PI Season 4? The answer is quite simple. “Magnum PI Season 4 airs every Friday at 9 pm ET on CBS in the United States.” Moreover, the episode is available to stream on Paramount+ as well. Other than that, the show is also available to watch on Youtube TV and Amazon Prime Video.