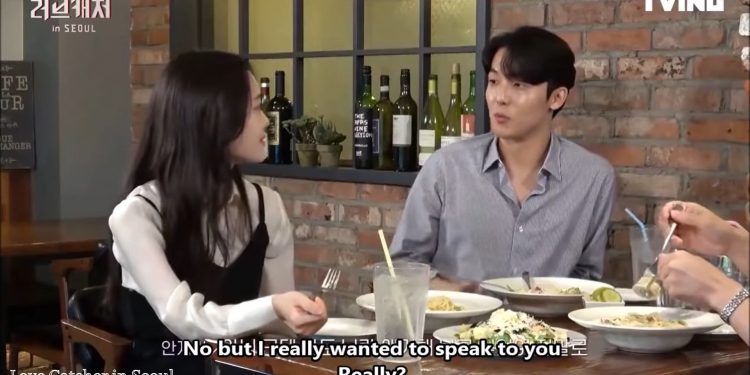 The South Korean reality show ‘Love Catcher in Seoul’ is a psychological dating game. The show has successfully attracted the attention of many viewers out there who are deeply invested in the genre of reality shows. Audiences out there are really enjoying the interesting build-up of the show and also the participants inside it.

Of course, everyone has picked up their favorites from all the contestants of the show. They are constantly rooting for them and also praying to see the end together with their desired person. The third season has brought up many interesting twists and turns, and the concept of dating psychology is being loved by all the age-group viewers out there.

There are endless assumptions and fan-made theories going around the internet about the contestants of the show. Fans out there are really excited to see them paired up with the one they like and also to witness their confession. Overall, it would be right to say that the show has got a good grip on all its viewers with its amazing suspense creation and stunning revelations.

Here, we have summarized all the details about the dating reality show. Therefore, let’s have a quick peek inside.

The reality show ‘Love Catcher in Seoul’ made its debut on November 19, 2021. It has become one of the most-streamed Korean reality shows since the release of its first episode. Gradually, it is gaining more ground, and its audience base too has increased with each new episode.

Moreover, the show has a total of 8 episodes, and each has a running duration of 1 hour and 20 minutes. Each new episode is released on Fridays of every week, and here’s the episode schedule of the show:

The show is all set to air its seventh episode on December 31, 2021. With the New Year, we will bid goodbye to the show as the finale episode will premiere on January 7, 2021.

Till now, there haven’t been any changes in the episode schedule of the show. Though, if there are any made in the future, we will keep you updated about it.

Also Read: The Intruder’s Motive is Revealed in Episode 6 of ‘Uncle’

Where to Watch ‘Love Catcher in Seoul’?

The television show is limited to only a few streaming platforms. And, if you are part of the international audience, then it is going to be a bit of work for you. The domestic viewers can switch to the TVING platform to catch up with the episodes of the show. Maybe, they will need a subscription. For international viewers, they have to surf through the internet to find the options.

‘Love Catcher in Seoul’: What’s Happening in the Reality Show?

Season 3 of the show has come up with many new challenges and amazing psychological games in the dating reality. The competition is between “love catchers” who are on a hunt for a destined love and “money catchers” who are trying to grab a large monetary prize. Both are two sides of the same coin, and it is quite fun to see them trying to figure things out in their own ways.

The judges of the show are Son Ho Jun, Jang Do Yeon, Sunny, Loco, and Miyeon. They are there to represent the value and trends that are dominating the relationships in today’s world. They watch and monitor the show’s participants and then give away honest opinions and comments about each of them and the current situation.

In the previous episodes, the tension between Haneul and Soo Won has been growing thicker. Both of them are stuck in the messy cycle of denial and misunderstandings. There’s a lot happening inside, and most of it is related to the tragic situation between the most favorite ones of the audience.

The situation has successfully made the audience frustrated to an extreme level, and now they want nothing more than witnessing a nice talk or kind of confrontation between Haneul and Soo Won. Though, that doesn’t seem to happen any soon as both of them are busy avoiding each other.

In the upcoming episodes, the audience is going to see the growing suspense between Soo Won and Haneul and the increasing closeness between Jimin and Haneul. Though, we don’t know how these two things are going to work without creating any havoc.