Law School episode 9 takes place in the present time only and does not show much back and forth. Only some scenes during Professor Seo’s death and Seung-Jae takes place in the past. Law School Episode 9 recap is the most interesting one as it reveals many things. I must admit that the series is one cleverly written one. The writer did have a way of linking the professors and students to the crime, making it seem the accused to be indeed a guilty one. The more one watches the drama, the more their curiosity piques. They think someone to be guilty and turn out as the murderer. However, such is not the case, much to their disappointment.

The drama is an engrossing treat for everyone as it brings surprises with every episode. It is not always easy to find out the actual truth or culprit of a murder case. The recent ongoing Law School drama is proving the same. In the most recent episode 9, viewers are more interested to know what happened with Ye-Seul and Yeong-Chang. Did Yeong-Chang die? Did Ye-Seul go to prison for killing him? What happens to Professor Yang’s trial? Does Seung-Jae come forward as his alibi? The below recap for episode 9 will give all of your answers?

Law School Episode 9 begins with Yeong-Chang falling on the ground and how Ye-Seul is panicking. However, Professor Yang, Kang Sol A, and Joon-Hwi reach there in time. Professor Yang sends Yeong-Chang to the hospital. Joon-Hwi takes Ye-Seul for treatment as she falls. On the other hand, Kang Sol A reaches their room for gathering evidence that Ye-Seul was not trying to escape. At the hospital, Assemblyman Ko is very angry and wants to send Ye-Seul to jail immediately. However, he could no do so due to the interventions of Joon-Hwi and Professor Yang. 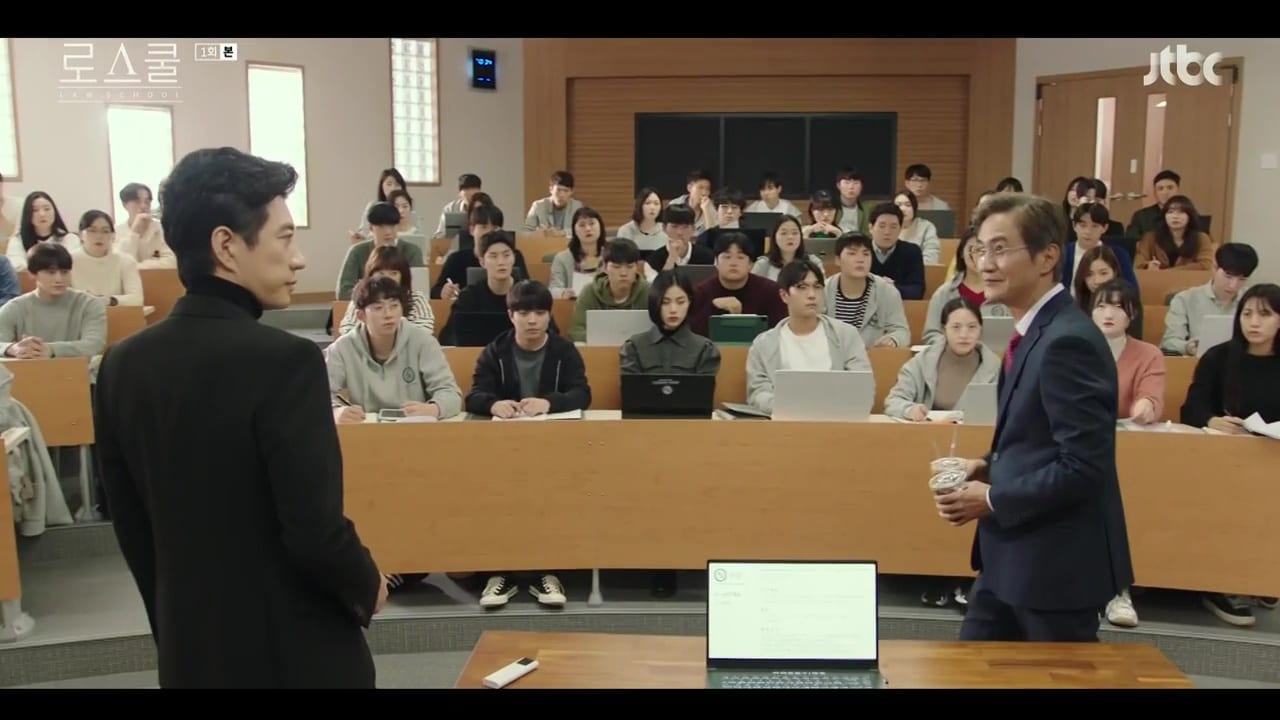 A glimpse from Episode 1 of Law School wherein Professor Seo and Professor Yang is talking with each other (Credit: JTBC)

Also Read: Kim So-Jin Joins The Cast Of ‘Those Who Read Hearts Of Evil’?

Then, Professor Yang’s fourth trial also begins in the episode. But, Professor Yang is at a great disadvantage at this time. He does not have an alibi and does not want to call Kang Seol B a witness. Furthermore, Seung-Jae does not come forward as his alibi. We also came to know in the episode about Seung-Jae’s secret. Well, his perfect score in the exams is all due to his taking the questions from the Professors. In another, he is cheating and getting good grades for all his exams.

The episode also revealed Kang Dang’s relationship with Professor Yang and Assemblyman Ko. Kang Seol A is angry about finding out the same and confronts her mother as well as Assemblyman Ko. On the other hand, Ye-seul also gets into a lawsuit. It is a good thing that her boyfriend did not die. However, neither he nor Assemblyman Ko is keen on forgiving her. Furthermore, no attorney nor public defender is taking up Ye-Seul’s case. At last, Professor Yang came as her defender, much to everyone’s surprise. He demanded a jury trial for fair proceedings against the defendant.

Law School Episode 9 shows many twists and turns, not only in Professor Yang’s case but also Ye-Seul. As a law student, I am finding the drama interesting and exciting. I would rate the episode 7 out of 10. From the beginning, Law School is depicting only one case. I also agree that in reality cases do take a long time for coming to an end or finding someone guilty. However, no one likes to watch a whole drama based on only one case.

The students have the evidence to prove Professor Yang not guilty at once. But, they are reluctant to do so because of their secrets. As law students, they know the consequences of everything. Even so, they are not placing any importance on any guilty or innocent fact. It has come until episode 9, but no one is any closer to finding out the real culprit or truth. In fact, they are bringing only more secrets, complications, and sub-plotting. It was not necessary to put Ye-Seul’s trial. What is the point? They have cameras everywhere. Did the parking lot not have one? She could have also easily filed a sexual harassment case against him.