The list was full of powerful and amazing divas of kpop! 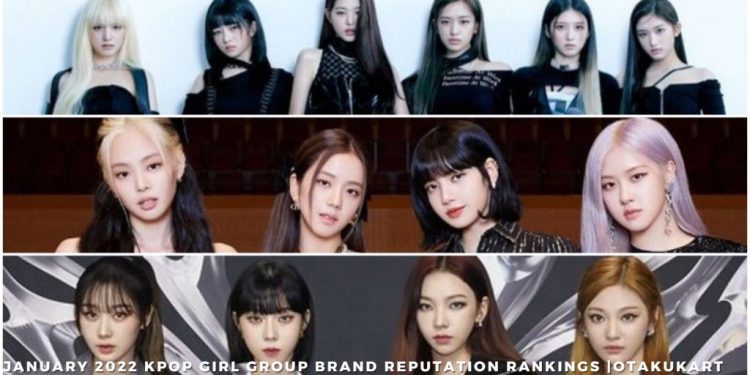 There’s no doubt that kpop’s girl groups are the best of the best. The members of the bands can sing, dance as well as can rap. From female idols with sultry voices to those who can show off powerful dance moves, female kpop groups are a force to be reckoned with. Let us see which of these powerful women had dominated the top ten of the rankings for January 2022 kpop girl group brand reputation.

Before getting into it, let us mention the groups that made it to 11-30 position in the rankings- Weekly, STAYC, Brave Girls, APRIL, LOONA, Girl’s Day, MOMOLAND, LABOUM, fromis_9, ITZY, DIA, HOT ISSUE, (G)I-DLE, WJSN, Dreamcatcher, f(x), cignature, Weki Meki, EXID, and ELRIS. Now, without further ado, let us see who made it into the top 10.

The rookie kpop group had landed in the top 10 in just a matter of days after their debut. It hasn’t been even a week since they released their debut song Wa Da Da. The girl group had already captured the hearts of millions of people while performing at the survival show Girls Planet 999. We can’t wait to see what more records these talented girls are going to break!

Mamamooo had taken over the 9th position of the Kpop Girl Group Brand Reputation ranking of January 2022. The members had made released songs like Mumumumuch and had focused on their solo activities too. Recently, Whee In and Moonbyul have been thrilling fans with posters and teasers of their upcoming releases, Hwasa is taking over the charts with I Am A B, and fans are waiting to see what Solar has in store for them!

The 6th place on January 2022 Kpop Girl Group Brand Reputation Rankings went to APINK. Believe it or not, the amazing girl group APINK has been in the kpop industry for more than a decade now. Recently, fans went crazy when it was announced that the girl groups will be making a comeback with all of the members. The girls of  APINK ars supposed to make a comeback this year’s February. The members of APINK had also held a fan meeting Pink Eve” at Sejong University’s Daeyang Hall in Seoul on December 31. Start collecting your money for their next comeback!

Girls’ Generation was sure to make it to this list. After about fifteen years since their debut, their popularity hasn’t faltered a single bit. Although we haven’t got an OT8 comeback in a while, the members of Girls’ Generation had been busy with their own solo promotions. Taeyeon and rocked the world What Do I Call You, while Hyoyron made the world dance with her in her solo releases like Dessert. Meanwhile, these two members have also been joined the first unit of the supergroup ‘Girls On Top’.

The members of OH MY GIRL had been on a roll last year and have started the year on a good note with their song ‘Shark’. The group had seen a rise in their popularity when they released their EP Dear OhMyGirl. Not to forget how OH MY GIRL’s maknae TXT’s leader Soobin had started the dolphin cult last year. That surely must have been the highlight of kpop fans’ 2021.

The kpop girl group Red Velvet bagged the fifth place on January 2022 Kpop Girl Group Brand Reputation Rankings with a brand reputation index of 2,547,622. The girl group had made its much-awaited comeback after a long hiatus with Queendom last year. Three of the members, Yeri, Joy, and Irene, were occupied with their acting careers, Wendy and Joy made their solo debuts, and Seulgi had recently had a collaboration with GOT7’s Bambam. There is so much going on!

This list would feel totally empty if the super popular girl group TWICE hadn’t been in here. The girls had a total brand reputation index of 3,067,624. If there was one group that had been serving fans with content constantly without a single break, it would be TWICE. In just a year, fans got an offline concert, an album Taste Of Love, a Japanese studio album Perfect World, their first English single, and even a Korean studio album Formula Of Love: O+T=>3. Phew! Just mentioning all they had done last year made us tired. Besides that, the girl group has also a world tour planned, which they have already started!

The girl group AESPA had secured its third position on the Kpop Girl Group brand reputation rankings of January 2022 with its immense popularity. SM Entertainment’s 4th-Generation kpop girl group Aespa had a total of 3,497,177, brand reputation index. With this, they had seen a 27.08 percent increase in their score since December of 2021. The girls of AESPA had rocked the world with their recent comeback, Dreams Come True. Everyone had been looking up for the song, and a million od people had been listening to it. We won’t be surprised if the song is almost everyone’s favorite. The whole of the internet was also very thrilled to see two of the members of Aespa joining SM Entertainment’s supergroup ‘Girls On Top’.

The second place of January 2022 Kpop Girl Group Brand Reputation Rankings came under the monster rookies IVE’s wings. In last year’s December, which is just a month ago, the girls of IVE had wooed the world with their debut song ELEVEN. So it is not surprising why the newly-debuted kpop girl group IVE had ranked so high on the list. STARSHIP Entertainment’s girl group had gathered a total of 5,442,980 brand reputation indexes. They were just neck to neck with Blackpink for the first prize. It is outstanding how the girls have already started achieving so much! All around the world, people wanted to know who the talented members of IVE were. Furthermore, Yujin and Wonyoung being the now-disbanded IZ*One girl group, brought the kpop group more attention.

The mega-popular and successful kpop girl group bagged the first position for the girl group brand reputation rankings for January 2022, as always. With the group’s popularity and the luxurious brands they support like Dior, Chanel, Louis Vuitton, and Celine. The YG Entertainment girl group ranked first on the list with a brand reputation index of 5,619,627, marking an 8.42 percent rise in their score since December. Most of the highest searched terms of Blackpink according to kpop girl group’s keyword analysis were ‘Snowdrop’, ‘BLINK’ and ‘Blackpink: The Movie’.

Looks like every netizen wanted to know when Snowdrop was releasing and what was Snowdrop’s controversy about!

Also read: Kpop Female Idols That Made The World Go Gaga Over Their Visuals This Year!