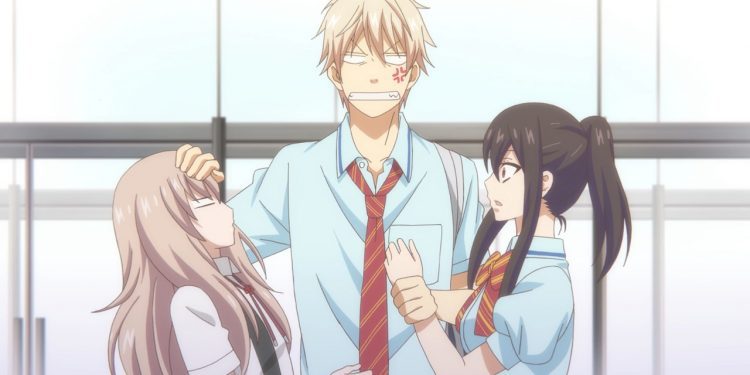 Kono Oto Tomare is originally a manga series that was written and picturized by Amyu. It has a total of 25 volumes so far, and the first volume was published in August 2012. After the success of the manga series, it got an anime adaptation by Platinum Vision. The first episode of season 1 was premiered on April 6, 2019, and the last episode of season 2 was premiered on December 28, 2019. So, basically, both the seasons were aired in the same year.

Music is what makes everything beautiful in life, and it does not matter what problems you are in, you will get the way through music. The plus point about this anime series is that it has music as its central theme, which creates a positive environment throughout the series. Kono Oto Tomare gives us a perfect opportunity to learn about music because an anime series like this uses traditional instruments like Koto to develop a connection from the old generation to the new generation.

Koto Oto Tomare season 1 starts with the main character Chika Kudou. The story revolves around him and other characters like Satowa Houzuki, Takezou Kurata, Hiro Kurusu, etc. Chika is a delinquent who never understands his grandfather, Gen Kudou’s motives behind Koto and other musical instruments. But after his grandfather’s death, he joined Tokise High School Koto Club, and the reason behind this was to learn and understand music.

However, the club needs more members, and as a club president, Kurata has to take responsibility. Takezou does not want to accept Chika’s club joining application because of his bad behavior. But he gives him another chance after seeing his passion for learning music. The plot is based on music and their journey as a musician. Their strength and weakness in music is a perfect combination of life which is shown by this amazing anime series.

Also Read: Who Does Sung Jin-Woo End Up With in Solo Leveling Manhwa?

After the end of season 1, Kono Oto Tomare Season 2 starts with negative elements like depression, sorrow, sadness, anxiety, etc. After getting unfavorable responses from audiences during their performance at Music Festival, all the Koto club members lost their will to perform in the upcoming national competition. But the Koto club president Takezou Kurata and other members are ready to learn from the negative responses of their performance and want to improve their skills by practicing for the upcoming music competitions.

However, they need an advisor, so Suzuka Takinami becomes their advisor. After that, they started to work on their instrument playing abilities for Koto because they lacked a basic quality and important quality needed to play Koto, which was ‘experience’. Their experiences in music create a negative impact which is trying to destruct their progress, and they have no idea how to handle it. But still, as Koto club members, they all want to give their best in the upcoming music competition.

Also Read: Biao Ren: Blades of the Guardians: When Will It Release? Trailer & Story

What To Expect From Kono Oto Tomare Season 3?

After the end of season 2, Kono Oto Tomare Season 3 will start from their achievements in music as a musician. From inexperienced musicians to experienced musicians, they will rewind their journey from a failure to successful musicians around the world. It is expected from Kono Oto Tomare Season 3 that it will continue the story of season 2. Also, including the music competitions as a major concept for running the whole season is enough. It is because Kono Oto Tomare is mainly based on music, and an anime without any competitive edge will just not convince audiences to watch it.

Moreover, we can expect some romantic relationships in season 3 as a major concept. As we already know, music is indirectly defined as love, and there are so many scenes in season 1 and season 2 where Chika Kudou and Satowa Houzuki share their feelings for each other. So we can expect more lovey-dovey scenes in the Kono Oto Tomare Season 3.

According to the news, Platinum Vision has not announced the official date for Kono Oto Tomare Season 3 trailer yet. However, there is an expectation from the distributors of the series that we will hear an announcement regarding the official trailer. Also, it is not confirmed yet, but there’s still has a high chance of getting some information about the same in two or three months.

Moreover, we can expect that the official trailer for season 3 will be 2 minutes long, and the trailer will conclude the experience of their journey as musicians in the anime series. Kono Oto Tomare fans are eagerly waiting for the official news. So, for now, we have to wait. Until then, you can watch Kono Oto Tomare Season 1 and season 2. You can refer to the respective platforms for online streaming platforms, which we have mentioned in this article.

Kono Oto Tomare season 1 and season 2 have not covered all the chapters from the manga series. As we all know that, the manga series is 25 volumes long, and there are still so many concepts they need to cover. If we look into resources and materials, they already have enough information regarding the adaptation of Kono Oto Tomare Season 3. So, if Platinum Vision uses all the resources and materials, then they can easily make a season 3 without any problem.

Moreover, the studio has all the additional source material they would need for producing a third season. By this, we mean is the data books as well as key points from mangaka that could help tailor the plot for further seasons. The chances are that the production team was busy with their upcoming winter 2022 anime, Love of Kill. Soon after its premiere, we could hear about any future projects by the Platinum Vision, which will hopefully be about Kono Oto Tomare Season 3.

Where can you watch Kono Oto Tomare?

After discussing all the necessary information about Kono Oto Tomare, you must be excited to watch Kono Oto Tomare once again. So if you are also interested in watching Season 1 and Season 2, then you can use Netflix, FUNimation, Hulu, Muse Asia, and Crunchyroll. All these streaming platforms are legal, where you can watch all the episodes of Kono Oto Tomare while also giving you access to other anime series like Demon Slayer, My Hero Academia, One Piece, etc. You just have to subscribe on their respective platforms by using your mail-id.