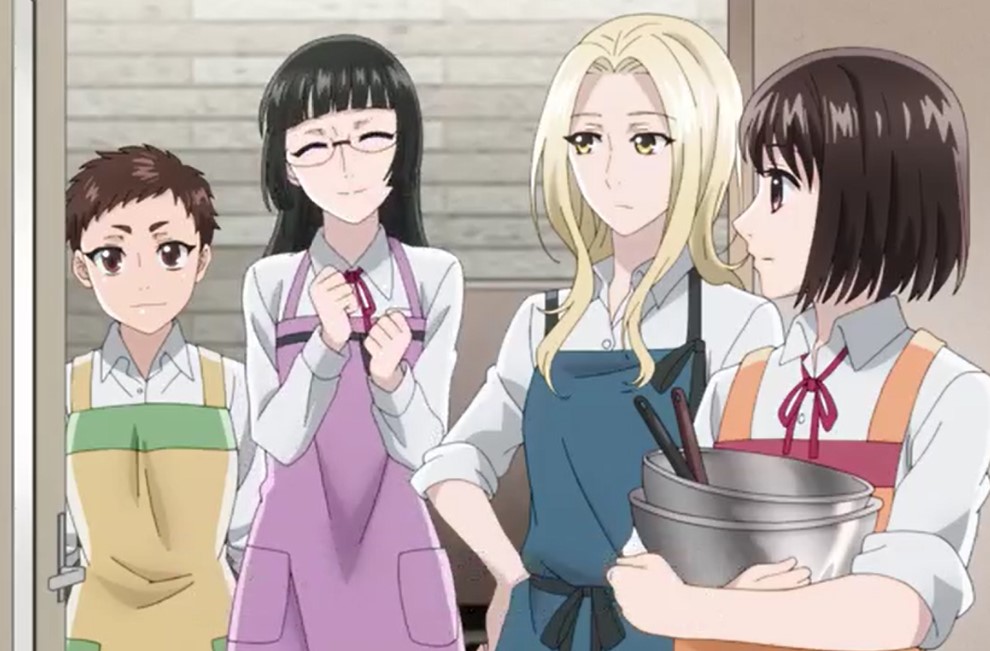 Ryo went to work, and when he returns, he finds Chika cooking. He is surprised to find Chika in his home for the second time. Ryo collapses, asking if this is Chika on his home wearing an apron. He thinks that he is daydreaming from exhaustion. Chika greets Ryo asking him to control himself. Ryo asks if he turns in their marriage registration without realizing it. Chika replies that it has never happened, and Roi arrives and greets his brother. Other friends of Roi appear and greet Ryou wearing an apron.

Roi reveals that the other two are Satsuki and Ruri from her class. Satsuki comments that they are borrowing his kitchen for the time being, and she hopes he is okay with it. Rio reveals that her friends come over since they couldn’t get their culture festival prep done at school. Ryo realizes that he was having wrong thoughts about Ichika. He asks them what they are preparing. Satsuki replies that they are making a Japanese-style cafe. Ryo replies with a charming voice, and the two girls got attracted to Ryou.

Previously on Koi to Yobu Episode 2

Chika looks at Satsuki and Ruri; she realizes that the two have fallen for Ryo. Chika asks herself who is the heck is this smooth criminal. She wonders if this is one of Ryou’s skills as a womanizer. Rio reads the room and asks Ruri, along with Satsuki, to hang in her room until the cookies are cool. The two left with Rio blushing that they have met a handsome hunk. Ryo also pulled an act and commented that he is heading to his room. He wants to see if Chika will stop him.

He has noticed that Rio has given them space so they can talk. Ryo told Chika to enjoy her stay. Chika is disappointed, and she is heading in the opposite direction while looking back at Ryou. Ryo thinks that Chika will do as a newlywed housewife wearing an apron, and he thinks it is awesome. Inside the room, Ruri and Satsuki complement Rio’s brother. They comment that Ryo is handsome, super hot, and mature. Chika has also arrived inside Roi’s room.

She is just quiet listening to the girls talking about Ryou. Ruri said that the boys at school don’t stand a chance against Ryou. Satsuki comments that Ryou is tall and he looks amazing in a suit. Ryou is so handsome that he is doing a favor by wearing a suit when he is wearing a suit. Chika can’t believe what the two say and told Rio that she thought Ryo wasn’t supposed to be here. Rio replies that she thought that her brother wouldn’t come back. Chika comments that the two have fallen under Ryo’s spell.

Ruri asks Chika if she doesn’t think that Rio’s brother is a total hottie. Chika became speechless and looked away. Ruri said that she could see Ryo being in the men’s magazine wearing something fancy. Satsuki comments that Ryo would look amazing in a white tuxedo or a garcon outfit. The girls keep on praising Ryo about his looks and outfits. Ryo listened to what the girls and Ruri aks the age gap between Rio and Ruri’s brother. Rio reveals that he is ten years older than her.

Satsuki comments that age is just a number, and Rio reveals how she grew up with her brother. Rio reveals that there was a time when Ryo was a troublemaker. Rio also went to her room when Ryou quarrels with his father. She locks himself inside the room and listens to music. Her father always complains about Ryo bringing different kinds of women, and it bothers her a lot. Later Ryou met with his friends and talked about the girl that he just recently met with.

Koi to Yobu Episode 3 will release on Monday, 12 April 2021, at 9:45 PM JST. You can watch Koi to Yobu online on  Crunchyroll. Let’s find out what the preview has to offer below.

You can also read about Preview And Recap: Koi To Yobu Episode 2