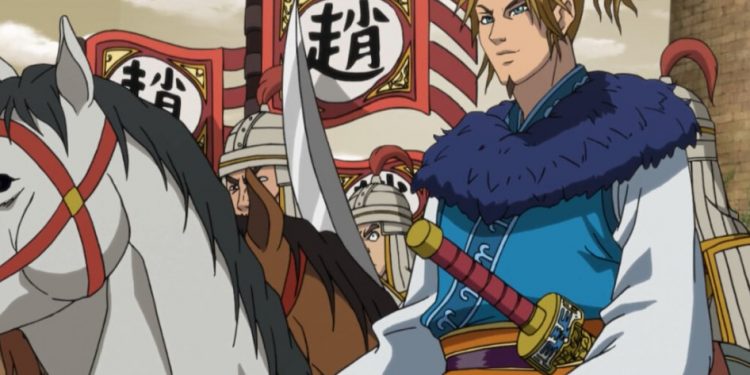 Kingdom Chapter 702 reveals the return of the Zhao Three Great Heavens while Zhao mourns the death of comrades. The war has brought pain and grief to the Zhao nation that wants to avenge their beloved ones. They can’t believe that Kanki treated their people even though they surrendered. Kingdom’s latest chapter has been delayed for a month due to holidays. They promised that they would assassinate the Qin’s nation and never forgive them. Zhao appeared in court believing that a guy named Renpa would help them.

Renpa met with one of them, discussing what he had heard. The soldier begs Renpa to follow him. The Zhao nation gets excited knowing that Renpa will return. But not all of them are pleased since they know that Renpa once left them. The messenger that talked with Renpa arrived and told the others that the King rejected Renpa since he was once exiled. They begged him to reconsider, but other politicians decided to get rid of him. The narration says that the “Zhao Three Great Heavens Riboku” would face Kanki of the “Qin Great Six” in three years.

In Kantan, the Zhao nation is still affected by the aftermath of war. They cry for the families that died during the battle. One of the women couldn’t handle herself since she realized that her beloved son had died in the war. The guy near her told her that Kanki’s fault killed the surrendered ones. The citizens were surprised to hear that, and that guy reveals Kanki’s motives during the battle. They also learned that thousands of them got burnt to ashes; some were beheaded. The citizens cried, remembering about Chouhei. They decided to be part of the next battle and assassinate Qin soldiers with Kanki.

Kakukai and the politicians met, thinking about what they should do. The politician knows that things are getting worse, asks Kakukai what to do since the Qin troops who defeat General Kochou will invade Heiyou and Bujou’s castles. The politicians say that when the Qin force is done with that, they will attack Kantan. The Chancellor told them to relax, and it is no matter that General Kochou lost since they had more men to defend the capital. He is happy that Kank’s deed has awakened the citizens’ anger, and they are ready to fight.

He knows that the citizens from Bujou and Heiyou will join them. The combined armies will block the Qin and never reach Kantan easily. The Chancellor is worried since he has learned that officials are leaving Kantan with their property. He knows that no one will protect the country if the citizens do the same. But they can block all the entrances, so no one leaves the country. The official reminds the Chancellor that he was in those who wanted to escape and asks him why.

He admits that since he believes that the pillars of the country must escape and protect the King since they have to remain alive. They think that it is a brilliant idea, and Kakukai tells them not to get carried away since it is a stupid idea. They find why no one should not leave the country, but they are worried if a general in Kantan will act as the Supreme Commander after Kochou. One of the politicians suggests a name, but they think that “He” is too young to carry the title Supreme Commander. A report arrives, and they learn from the Chu revealing about Renpa.

Kingdom Chapter 702 will be released on 9 January 2022. They read and find that Renpa is coming back and get excited that Renpa will help them during the battle. But the Chancellor told them why Renpa left the capital, and he believed that Kakukai would die. They know that Ranpa reprimanded King Tou Jou and lost his rank. Let’s look at Kingdom-Chapter 702 official details.

You will be able to read Kingdom Chapter 702 online on various websites. The manga will return since chapter 702 got delayed, and Kingdom-Chapter 702 spoilers will release soon. Kantana’s horse travels to Seika city, Riboku, one of the “Three Great Heavens” returns three years. A year has passed after Riboku has returned, and he faces Kanki. Kanki vs. One of the Three Great Heavens, Reboku continues in the next chapter. Let’s meet when Kingdom Chapter 702 is released.

ENHYPEN Has Shared The Schedule For Their 2022 Comeback Album, DIMENSION: Answer