Finally, the intense battle between the semi-finalists ends! However, the finale shows an unexpected result with welcoming a new masked singer! 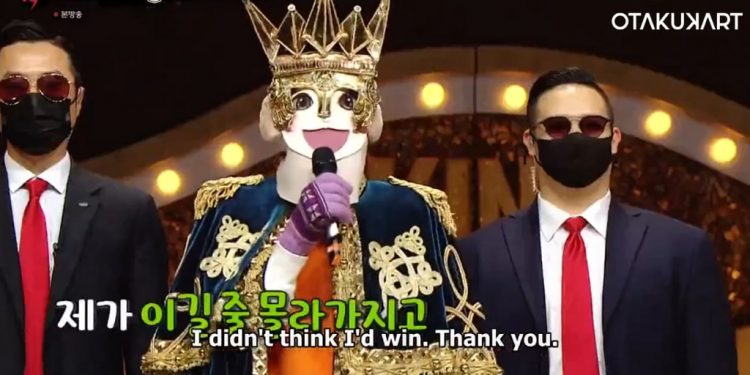 King of Mask Singer Episode 337 will be introducing eight new singing warriors to battle against the newly crowned masked king! Finally, the era of the masked queen Bear Paw has ended. It’s unfortunate, but we also meet the face hidden behind the bear paw, who holds the powerful vocal with brilliant singing technique. Besides Bear Paw, the episode also shows various unforgettable performances by the semi-finalist, making everyone nostalgic with the beautiful melodies. Each singing match brings different emotions, fluttering the viewers’ hearts with their soulful vocals!

The latest episode shows the battle between the four semi-finalists, Let It Be, Bookmark, Spotted Dog, and Winter Child. All go with the 90s songs, bringing back old memories attached to those evergreen pieces! Because of them, we get to hear At Any Time, Let’s Forget It and Seoul, Seoul Seoul; like masterpieces. Also, the finale becomes more intense by one giving a soulful performance while the other showing off her different singing charms. But in the end, the show finally welcomes a new masked king. Therefore, King of Mask Singer Episode 337 will show the next singing battle for the 168th generation throne!

Ep 336 of King of Mask Singer reveals the first semi-finale between Let It Be and Bookmark. Whereas Let It Be sings At Any Time, Bookmark goes with Seoul, Seoul, Seoul, brightening the whole studio and starting with cheerful old songs. The next masked singers, Spotted Dog and Winter Child, also choose old melodies such as Let’s Forget It and With You. All four performances touch the panelist’ hearts. Due to the fierce battle, we also farewell some amazing masked singers.

The episode reveals the owner of those sweet melodies making everyone surprised. Thus, we meet singer Jo Seung Go (Let It Be), who had sung Flower Wind Woman, Singer Joo Byung Sun, Broccoli You Too’s Ryuji. Each of them has given heart touching performance with their soulful yet powerful voices. And then the time comes for the final battle! Whereas Winter Child sings Back To You Again, Bear Paw sings Left and Right by SEVENTEEN. No one would have thought SEVENTEEN’s song would turn into a refreshing, sweet yet powerful melody.

Although Bear Paw shows off her singing techniques, the panelist seems captivated by the sweet, warm voice of Winter Child. Therefore, Winter Child becomes the new masked singer of the 167th generation! And thus, we finally meet the real masked queen who is none other than the winner of The Voice of Korean Season 2, Lee Ye Joon. No wonder she won four times in a raw. Therefore, King of Mask Singer Episode 337 will show a new singing battle with fresh melodies!

King of Mask Singer Episode 337 will be released on 26 December 2021 at 6.05 pm KST on the MBC channel. Finally, we have found a new masked king and the winner of the 167the generation, Winter Child! The final singing battle between the previous masked queen, Bear Paw, and Winter Child is one of the thrilling ones. Both singers showcase their beautiful melodies and amazing singing techniques. But eventually, Winter Child wins over the panelist’s hearts with his honey-coated vocal!

The preview of King of Mask Singer Episode 337 is already out! It seems the next eight masked singers will be challenging for the newly become masked king, Winter Child. However, it will also be interesting to witness and hear the upcoming powerful and sweet melodies. Also, the upcoming episode will be the year-end special for viewers! We will see Chow Yun Fat’s special performance that will brighten up the whole atmosphere of the studio. There will be little surprises for the panelist as well!

Amid this celebration, the singing battle will be more fierce with the new eight masked singers who will go through the first round. Therefore, King of Mask Singer Episode 337 will be the last episode of 2021 with a special performance and different melodies, making the year-end more memorable!

South Korean viewers can watch the variety show on the MBC network at 6.05 pm KST. After broadcasting, the episode will be available on the online streaming channel, Wavve (accessible only in South Korea). On the same day, it will release at 8.05 pm in Australia, 2.35 in India, 9.05 am in the UK, and 4.05 am in the USA. As for the international fans, King of Mask Singer Episode 337 is available on Kocowa (accessible only in South and North America) and Rakuten Viki with English Subtitles.