At last, we will find out how Yoo In Na's character will contribute to the tragic story of Snowdrop! 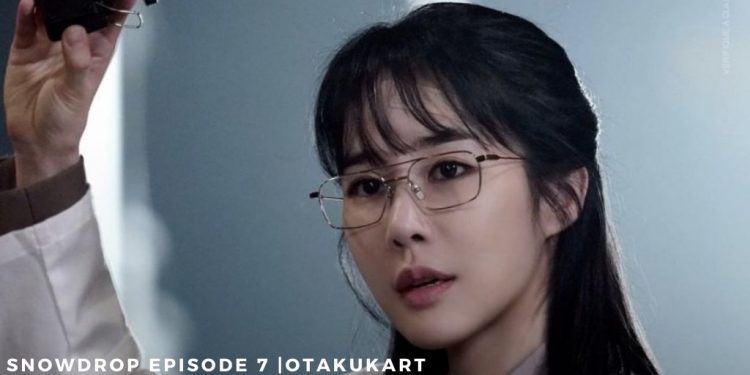 Snowdrop Episode 7 is coming soon! Fans are impatient to find out what will happen next in the love story of Young Ro and Soo Ho. The kdrama had taken the audience through a lot of twists and turns throughout the past episodes. Not to exaggerate, but there were no dull scenes in the episodes! From Young Ro dangling under a window in the third episode to Soo Ho taking the students of Hosu University as hostages, fans didn’t get to rest even for a minute. While it looked like things will turn back to normal by the ending of the third episode, Young Ro and her fellow university students were in for a surprise. Kye Bun Ok had caught hold on Young Ro’s secret and was just about to tell the ANSP about who hid the North Korean Spy when Ms.Pi stopped her at the right time.

Although fans think that Ms.Pi must have realized what had happened back in the night when Soo Ho turned up in Room 207, she didn’t let Young Ro and her friends’ silly mistake slip this time. She was about to expel all of Young Ro’s roommates when Young Ro begged her not to give them any punishment and that she will like to be held responsible. Fast-forwarding to when she was about to leave the school, Soo Ho once again ends up at the dorm-house and this time showed his true colors to Young Ro. Of course, Young Ro wouldn’t be able to forgive him and herself for putting her friends and people of Hosu Women University under mortal danger. At this point, fans can’t see how the main leads will get together.

Check out the release date, streaming details, and predictions for Episode 7 of Snowdrop to see what happens next!

The release date of Snowdrop Episode 7 is January 2, this Sunday. The kdrama releases new episodes every Saturday and Sunday. Fans are getting to watch the episode sooner than planned. As JTBC had decided to air three episodes of Snowdrop last week because of the kdrama’s controversy, the 7th episode will be released along with the 6th episode. Moreover, there is good news for Snowdrop lovers! The Blue House had decided to reject the application for the cancellation of JTBC’s Snowdrop due to ‘history distortion’. Fans worldwide hope that all of the misunderstandings about the kdrama clear as soon as they can so that everyone can enjoy the drama peacefully!

Where To Watch Snowdrop Episode 7?

The Korean audience can watch the kdrama on JTBC every Saturday and Sunday at 10:30 PM KST. Fans of Snowdrop hope that the ratings of the kdrama rise quickly! Furthermore, the international audience of the k-series can watch Snowdrop Episode 7 on Disney Hotstar+. However, not everyone can watch the drama while it’s airing. This is because the service is limited to countries like Malaysia, Indonesia, Thailand, Hong Kong, Singapore, Australia, New Zealand, and of course, South Korea. But fans do think it will be available everywhere once all of the episodes get aired. Other than that, you can be right on time to watch the episodes with a little help from us! The release time of the 7th episode is 7:00 PM in India, 8:30 in the United States, 1:30 PM in the United Kingdom, 12:30 AM in Australia, and 8:30 AM in Canada.

Episode 7 of Snowdrop will surely be absolutely thrilling! Through the preview of the upcoming episode, fans theorize that a feud is going to break out between Soo Ho and his North Korean comrade Joo Gyuk Chan. As seen in the latest episode, Joo Gyuk Chan wanted to kill at least one of the hostages so that the ANSP withdraw the security around the university, allowing him and his North Korean comrades to escape safely. Nevertheless, Soo Ho isn’t planning on taking anyone’s life yet, especially not in front of Young Ro (he’s already become a villain in her eyes).

In addition to that, the audience suspects that Soo Ho and his comrades are not the only North Koreans at the scene. Fans think that Yoo In Na’s character will finally be coming out of her shell in the coming episodes. They even reckon that she is also a North Korean spy considering the anxious face that she made when Nam Tae Il told her that North Korean spies have held students of Hose Univerity Students hostages. Nonetheless, some fans think otherwise. Some people in the audience have been guessing that Bun Ok’s communist sister could be Kang Chang Ya. Don’t forget to see how many of these theories are true in the coming episodes!

Also read: Jung Hae In’s K-dramas That You Need To Give A Chance Before Snowdrop