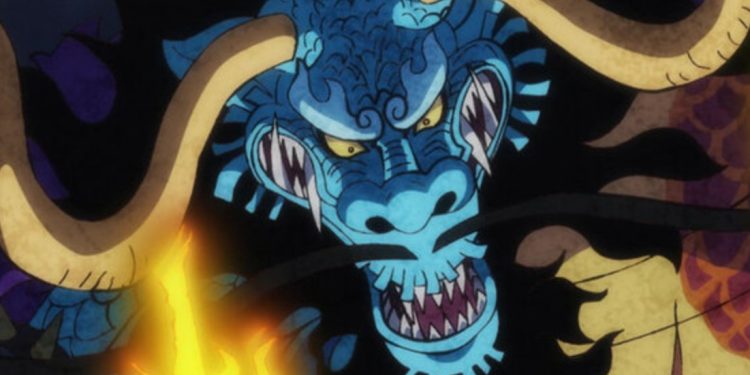 One Piece Episode 1004 reveals The Akazaya Nine vs. Kaido part 2, showing Kaido a heroic blade. Luffy headed to fight Kaido, but the Ancient Giant blocked his path. Franky and Jinbei decided to get rid of Ancient Giant. Franky lures the Ancient Giant outside of the castle. On the rooftop, the Minks take on Kaido, but Number Fuga and Jack interfere. Dogstorm and Cat Viper notice that Jack is rampaging, and they take Sulong’s form to stop him. Queen interferes in Zoro and X Drake vs. Apoo. In One Piece’s latest episode, Queen smiles after firing ice bullets.

Queen told everyone that he was the best and his ice bullets turned the Samurai into an ice monster. The Samurai guy also grows horns and wonders why he has to die here when he made it this far. Zoro wonders what is happening since those guys looks like Ogres. X Drake reveals that Queen used the Plague Rounds. The Samurai guys behind bite each other and turn into Ice Monsters. Zoro asks X Drake what kind of bullets are those. Queen told Zoro that he will when he shot him. The Samurai hide and avoid contact with bullets.

Previously on One Piece Episode 1003

Momonosuke thinks that he can fight with his father one last time. On the rooftop, Kinemon gets furious while shedding tears and looking at Kaido, who is in his dragon form. The Minks fights with Number Fuga and his underlings while Dogstorm and Cat Viper face Jack. The Akazaya Nine notice that everyone is in an intense brawl, and they are just standing watching the guy who killed their lord. The Minks lands an electric blow that sends Number Fuga to the ground. Jack looks at Fuga, notices that he is unconscious, and puts his elephant leg on his face.

The Minks tell Jack to bring it on and realize that they face one of the Lead Performers of the Animal Kingdom Pirates, Jack the Drought. They decided to make him pay for his evil deeds in the past. Cat Viper and Dogstorm think that Duke should let them settle the scores. Duke agrees since he wants to recover after having a one-on-one with Fuga. Dogstorm reminds Jack that the Minks will never forget him. Dogstorm and Cat Viper remind Jack about the arm and leg he cut from them.

Cat Viper and Dogstorm vs. Jack begins while Big Mom appears outside and hears Perospero saying, Mama! She sees Marco and wonders what he wants, but Marco reveals the same goal. Big Mom gets angry when Perospero says he is here to bring down Kaido. Back to the rooftop, the Akazaya Nine vs. Kaido begins. Kaido is angry that Jack was beaten to a pulp and won’t spare them. He notices that the Sulongs have brought everyone down and told Jack to rest since he will take care of the Akazaya Nine.

One Piece Episode 1004 will be released on 19 December 2021. Carrot also had a flashback of how Pedro sacrificed himself for them. She decided to face Pedro’s foe, and when she arrived out, she noticed that it was a full moon. Sanji and Luffy are on their way, but Kaido’s underlings keep blocking their path. Kaido’s underlings say that it si Straw Hat and Black-Leg. Kaido unleashed a Blast Breath to burn the Akazaya Nine. Let’s look at One Piece Episode 1004 official details.