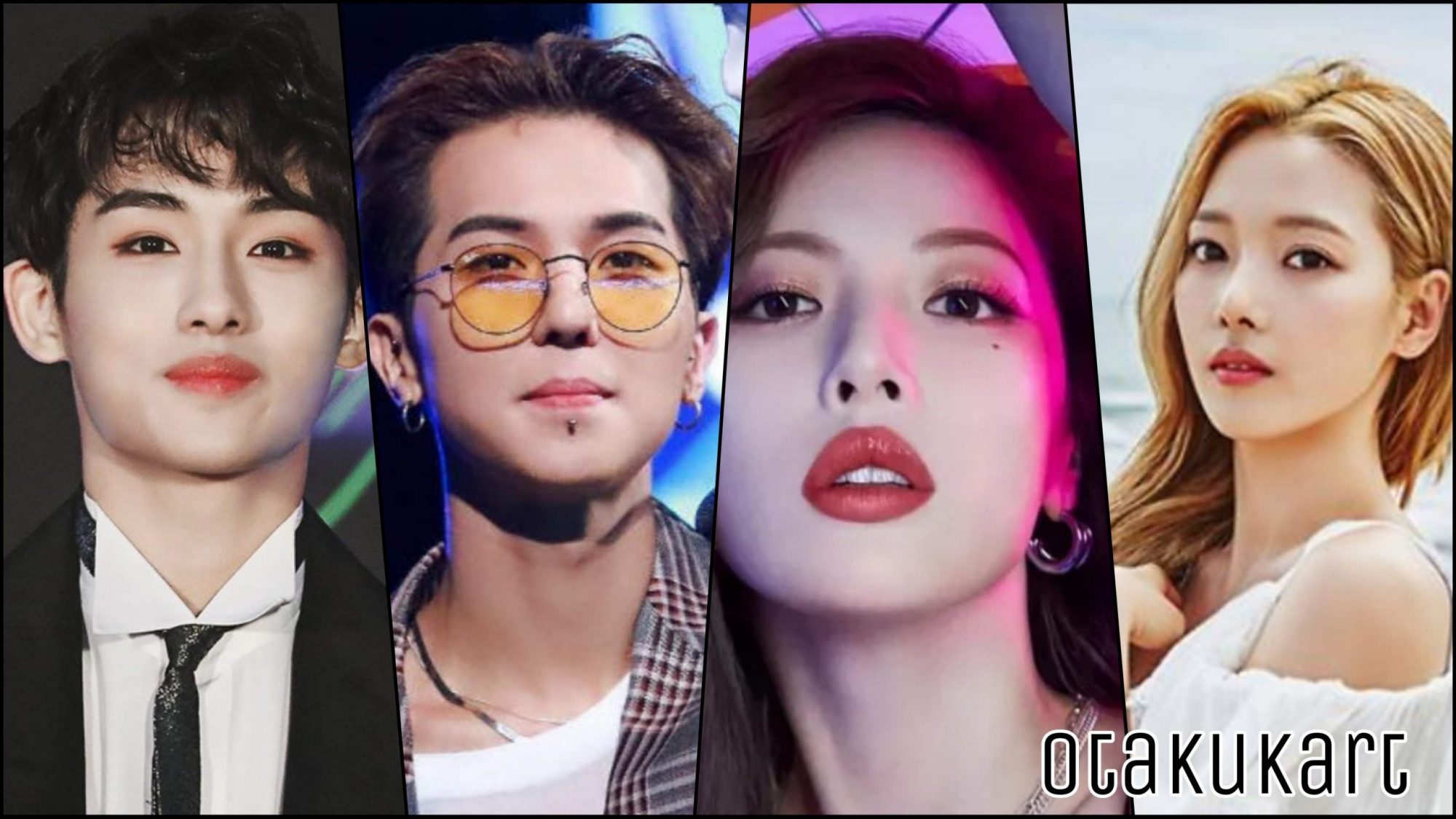 The music industry in South Korea is very different from the one in Western countries. South Korea has a whole industry marketed towards training aspiring boys and girls to be professional singers and dancers who would debut as K-pop idols which are rarely found in other countries. However, sometimes debuting even after years of training does not guarantee success. While groups like Girls’ Generation, Super Junior, EXO, and TWICE have been together for a long time and have contributed loads to K-pop music, there are certain K-pop idols who have to debut more than once after their groups fail to make a solid impact.

While some of them have to start back from square one, others begin their solo career or participate in survival reality programs to earn immediate attention. Here are the top thirteen K-pop idols who have debuted multiple times with different K-pop groups. Without any further delay, let’s check them out here!

Chaekyung has debuted multiple times with new K-pop groups, starting from ‘Puretty’ under DSP in 2012, which concluded in 2014. She later appeared as a contestant on the Kara Project survival program to be a part of the girl group Kara. She also represented her agency on ‘Produce 101’ but couldn’t get himself in the final lineup. She became a member of the project group C.I.V.A through the MNET’s mockumentary series titled ‘The God of Music 2’. She once again debuted with LOEN Entertainment’s project group named I.B.I in 2016 before joining the girl group in April 2017 eventually.

Sohyun made her debut in the K-pop industry as a member of the girl group Orange in the year 2005 when she was just a teenager. She debuted again under Cube Entertainment as the maknae of the girl group 4Minute and was an active member till 2016. She left the record label after the expiration of the contract and then joined 935 Entertainment, only to switch to TheCNT three years later. She is now focused on paving her acting career and has been a part of popular K-dramas like ‘The Secret Life of My Secretary’ and ‘Class of Lies’.

Four out of five members of the South Korean girl group HINAPIA— MinKyung, EunWoo, KyungWon, and YaeBin have originally debuted with PRISTIN. The group, HINAPIA, had to disband sooner than expected, and the members are now pursuing their own career paths.

Kim So Hee is another K-pop idol who became a part of C.I.V.A formed through ‘The God of Music 2’ and I.B.I after appearing as a contestant on Produce 101 season one like Chaekyung. Following her departure from the groups, she debuted as a solo artist in 2017 and remained inactive for two years before making her comeback with the new girl group NATURE under n.CH Entertainment in 2019.

Before debuting with Kard, Jeon Somin had been a member of a few other girl groups which you might not know. Her first debut was with a K-pop girl group based in Japan called ‘Puretty’ in 2012 but disbanded in 2014. She even took part in a survival show called Kara Project along with a few of her former bandmates to debut again with the girl group supposed to be called Kara. However, she got eliminated in third place and later joined in April 2015. However, her time with April didn’t last much as she left the group the same year. Finally, she came back with Kard under the same company, DSP Media. If she ever makes a solo debut, it will be counted as her fourth time.

Hwang Minhyun started training with Pledis Entertainment when he was fifteen and made his first debut as a K-pop idol with the boy group NU’EST after two years of training in 2012. He participated in the second season of the K-pop survival program, Produce 101, in 2017 along with three of his fellow members and finished at the ninth spot, eventually grabbing a ticket to be the member of Wanna One. However, after the disbandment of Wanna One in 2018, he came back to his old agency to be a part of NU’EST once more. Recently, he released his first solo OST titled ‘I’ll be with you every day’ for the high-rated MBC series ‘The Red Sleeve. Cuff’.

Winwin is a Chinese singer, dancer, and rapper based in South Korea who first debuted as a member of the boy group NCT 127 in 2016 under S.M. Entertainment. Later, he made his second debut with their sub-unit NCT U and finally with WayV in 2019 under SME’s Chinese sub-label, Label V.

The South Korean actress and singer Lee Suji entered the entertainment industry in 2015 as a member of the K-pop girl group The Ark under Music K Entertainment. However, the lifespan of the band was a little too short, and after the official disbandment, Suji played the role of one of the members of the Real Girls Project in the television drama, ‘The Idolmaster KR’. She became a participant on The Unit: Idol Rebooting Project in 2017, where she ended up being one of the nine top finalists, eventually debuting with the girl group UNI.T.

Currently, Mino serves as the main rapper of the popular South Korean band, Winner, which was formed at the survival reality show of Mnet, ‘WIN: Who Is Next’. However, his first debut was with the boy group called BoM in 2011 under the stage name, ‘Tagoon’. After participating in a rap survival show titled, Show Me the Money 4, where he ended up as the runner-up, Mino made his solo debut in 2018. Before making his official debut, he was even a part of the underground rapping scene with other underground rappers-turned-idols, including Phantom’s Hanhae, Block B’s Zico, and P.O.

Before debuting as a member of the popular K-pop group EXID in 2012, Solji used to be a part of the vocal duo 2NB for four years since 2008. Later, she served as a vocal trainer for the members of EXID until three of the members left the band. She was welcomed in the band as the new leader and main vocalist under Banana Culture. After the expiration of her contract, she left the agency in 2020 but continues to be a member of EXID. She has now been signed under the agency C-JeS Entertainment for focusing on her solo career.

The first debut appearance of Kim Jung Ah was with the group SZ. Later, she joined Kis FIVE but eventually left it to be a part of the girl group ‘After School,’ for which received the most amount of fame. Not only did she remain an active member of the group for seven years, but she also served as their leader for four years. In 2016, her contract with Pledis Entertainment expired, and she made her solo debut in the same year.

Also Read: 6 Kpop Groups Contracts Ending In 2022! Will They Disband?

HyunA is a successful soloist at present, but to get here, she had to debut five times! She entered into the industry as a member of the K-pop girl group ‘Wonder Girls’ back in 2007 with JYP Entertainment. However, she left the agency and made her comeback under Cube Entertainment with a new group, 4MINUTE. Moreover, she had also been a part of their sub-units, Troublemaker and TRIPLE H, before the group disbanded in 2016, giving her way to being an independent artist.

Eunbi had originally debuted with Ye-A in 2014 under the stage name, Kazoo. Unfortunately, the group disappeared silently just after the release of their debut single. She ultimately signed a contract with Woollim Entertainment and became a contestant at the survival show Produce 48 in 2018. She finished at the seventh position, thus grabbing the opportunity of debuting as a member as well as the leader of the new group, ‘IZ*ONE’.

Following the disbursement of IZ*ONE in 2021, she is going to make a comeback as a soloist in the second quarter of the year under Woollim Entertainment.