Recently, Jung Eun Ji has appeared in a series of interviews after the end of the TVING drama starring her titled “Work Later, Drink Now”. 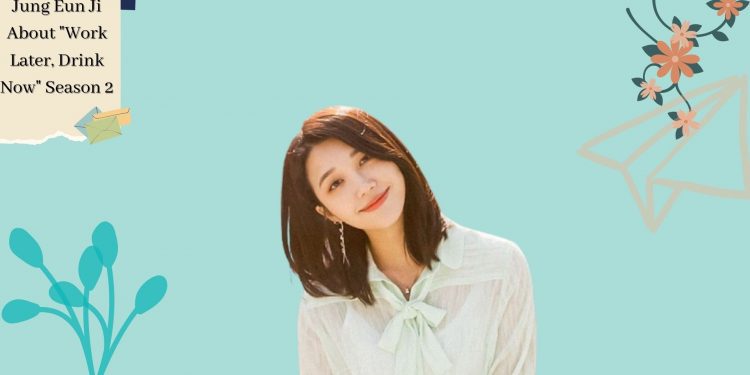 Recently, Jung Eun Ji has appeared in a series of interviews after the end of the TVING drama starring her titled “Work Later, Drink Now”. APINK’s member Jung Eun Ji has talked about her experience in the South Korean drama series and how she is anticipating the second season of the same. The drama series was a hit and was loved by millions of viewers out there. Its lighthearted content material and amazing portrayal of comedy as a genre made it one of the comfort shows for everyone out there. The interesting part is that it has not only made its name in the Asian arena but also beyond it in a very amazing way.

Here, we have summarized all the important highlights of her interview and all the needed details you would need to know about the same. So, without taking any more of your time, let’s have a quick skim inside.

She spoke about her character, Kang Jo Goo, in a detailed way, pointing out that she has no idea that people would like her character that much. She mentioned that when she first read the script and imagined the character, then it came out like yes, she can do this with expressions she hadn’t done before.

Her character is someone who has built walls around her to hide her scars inside and appear tough from outside, but it doesn’t mean that she is a bad person. Because at the end of the day, Jo Goo is someone who looks after everyone around her.

She takes care of Ji Yeon and So Hee under the trauma that she was not able to do the same for Se Jin. Her character is someone who never got the chance to live her life in her own way instead, she followed the map made by her mother. And Se Jin was the one who helped her break through the boundaries built by her mother. At the time of Se Jin’s death, she said to Jo Goo that “If you are born backwards, you have to walk backwards.”

Taking her last words to her heart, Jo Goo starts walking backwards, shaking off her mother’s hold over her life. She keeps learning new things and begins the process of finding herself.

Talking about her chemistry with Lee Sun Bin and Han Sun Hwa, she said that she always wished to have friends like them. She also pointed out that she does have friends like them, but the characters inside the show were friends since college, and all of them were of the same age. She really wants to have that kind of friendship in her life.

Jung Eun Ji also pointed out that she got really close to sun Bin and Sun Hwa unni in the drama series. They have been around the same age, and that helped them get along really well. She mentioned out that how the scene of So Hee’s funeral was the most devastating one in the series, and people out there can take inspiration from its details and practice for funerals that they would attend in the future.

ALSO READ: How Will The Students Face The Upcoming Problems in “School 2021” Episode 6?

Talking about the second season of the show, she said that she hasn’t come across the script for now. She also wondered that “was it just a cameo?” and “would the broadcast let it end just like this?” Furthermore, she pointed out that during the filming of the show, whenever the director read her lines, it felt unreal.

She said that Yoon Shi Yoon’s voice really made her think that it was Mr. Nice Paper. She had fun working with them, and she mentioned that he completed all his scenes at once at the very end of filming.

Moreover, Jung Eun Ji also said that the reward for her character had been something really big. But at the same time, it has been challenging. She has never played a depressive character, but she felt a great sense of responsibility towards her character throughout the show. She had a lot of fun while filming on the set, but when she was back home, it came as a realization that a character can affect one a lot. Being a fresh project for her, she really liked the idea of having multiple seasons.