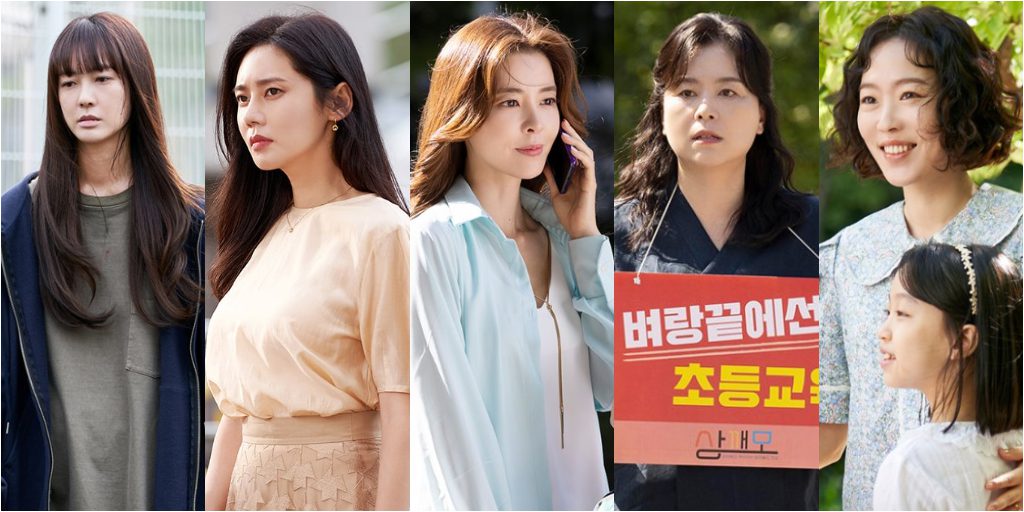 With the list of female-centric Korean dramas releasing in 2022 blowing our mind, here’s another one to add to your growing to-watch list. As per the reports, Green Mother’s Club is a drama that depicts the story of five ladies in the elementary school community called “Green Mother’s Association” who have more to themselves than just being “mothers”, and the unveiling of their hidden characteristics and motivations. It is also about the dangerous network of the guardians in the neighborhood. The drama promises a fierce psychological clash between the ladies who hide competitive sides behind their harmonious smiles. And now, JTBC has released new Green Mothers Club stills.

JTBC has revealed the cast of ‘Green Mothers’ Club. The five main ladies who have taken up the roles of mothers are Lee Yo Won as Lee Eun Pyo, Choo Ja Hyun as Byun Chun Hee, Kim Gyu Ri as Seo Jin Ha, Jang Hye Jin as Kim Young Mi, and Joo Min Kyung as Park Yoon Joo. The newly released Green Mothers Club stills depict these leading ladies in their respective auras. The first revealed look of the show can be found here. The screenwriter of the drama is Shin Yi Won (debut) and it is being directed by Ra Ha Na also director of (‘Tinted With You’). The drama promises to unveil the haunting secrets of the women who seem to be “just mothers” on the outside, and to showcase the kinds of conflicts adult friendships face.

JTBC has released the first Green Mother Club stills depicting our main five ladies, adding much fire to the anticipation of the viewers.

Lee Eun Pyo appears holding the hands of her children, dressed in plain clothing sporting a tired and haggard face, as if the household work has sucked all energy out of her. 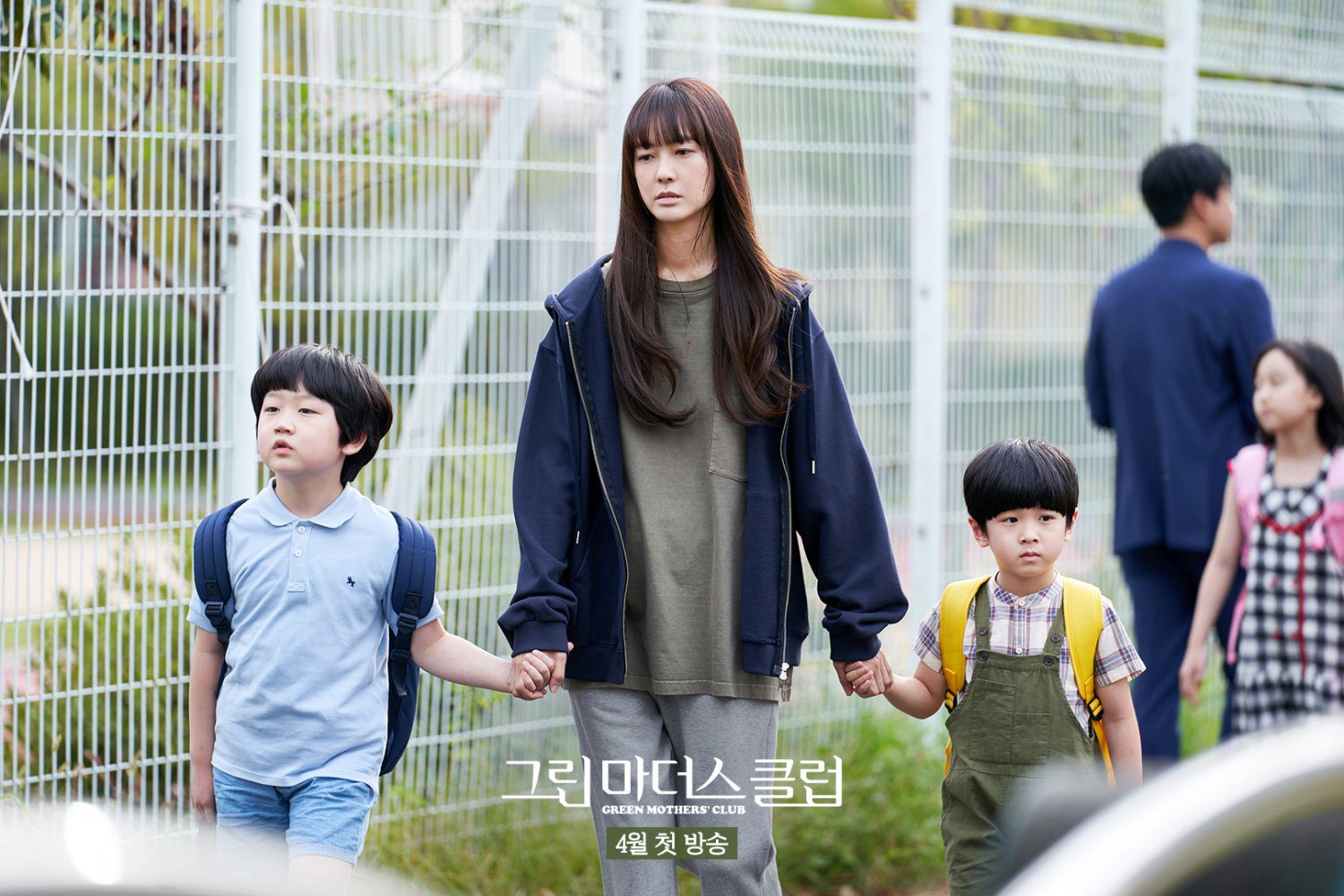 Choo Ja Hyun on the other hand appears in a very elegant and dignified outfit, with her strong gaze looking out to maybe something or someone who threatens to endanger her child. 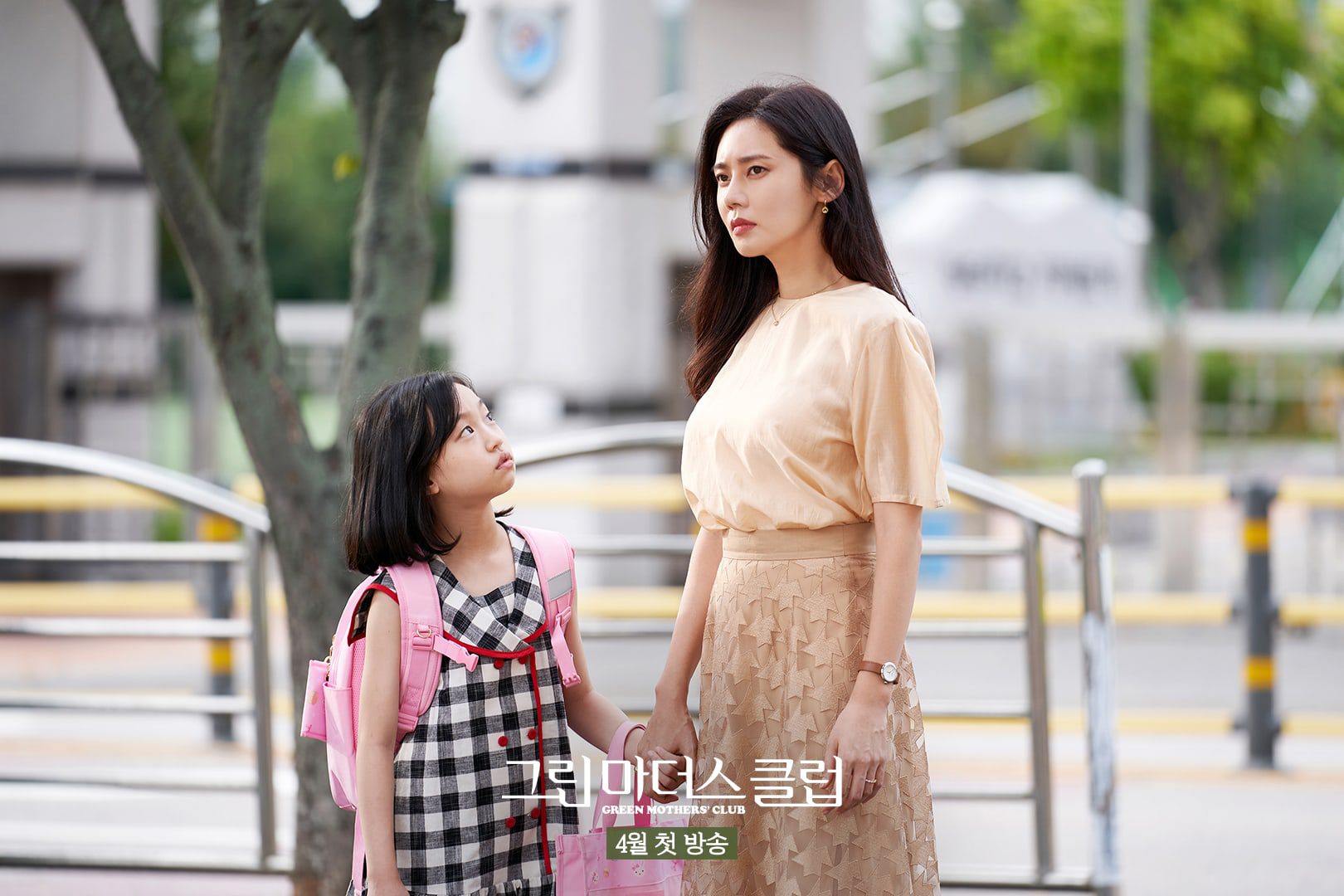 Seo Jin Ha seems to be a blend of the Eun Pyo and Ja Hyun as she appears to be dressed comfortably yet exudes an innate classiness. 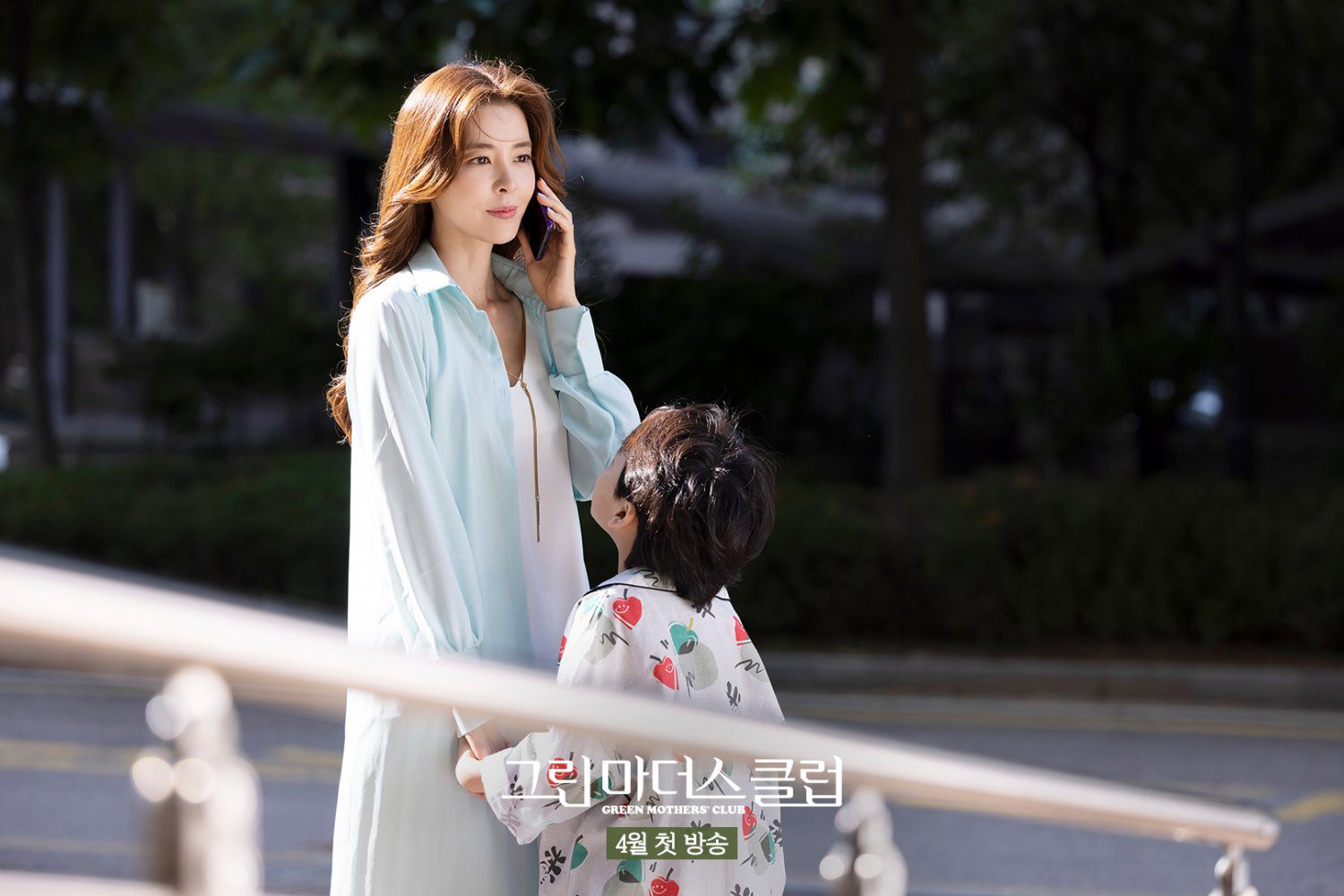 Next, we have Jang Ye Jin, the self-proclaimed ‘woke’ mother who is seen to be participating in a protest complaining about the education system. Her placard reads “Elementary Education is On the Edge of the Cliff”. 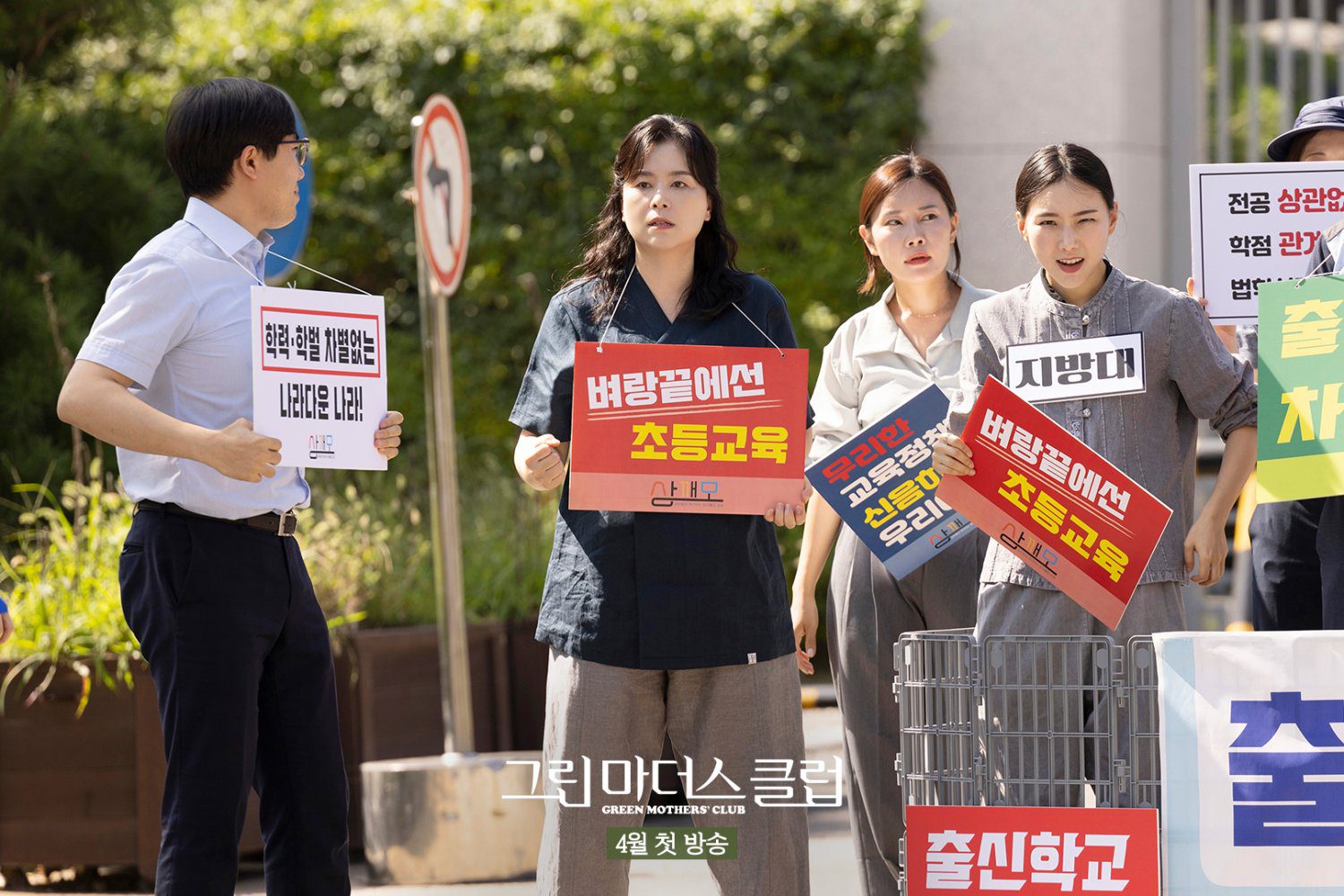 Finally, we have Park Yoon Joo who is sporting a bright and innocent smile, almost mirroring the vibes of her puffy floral patterned dress. She is also holding her two children close. 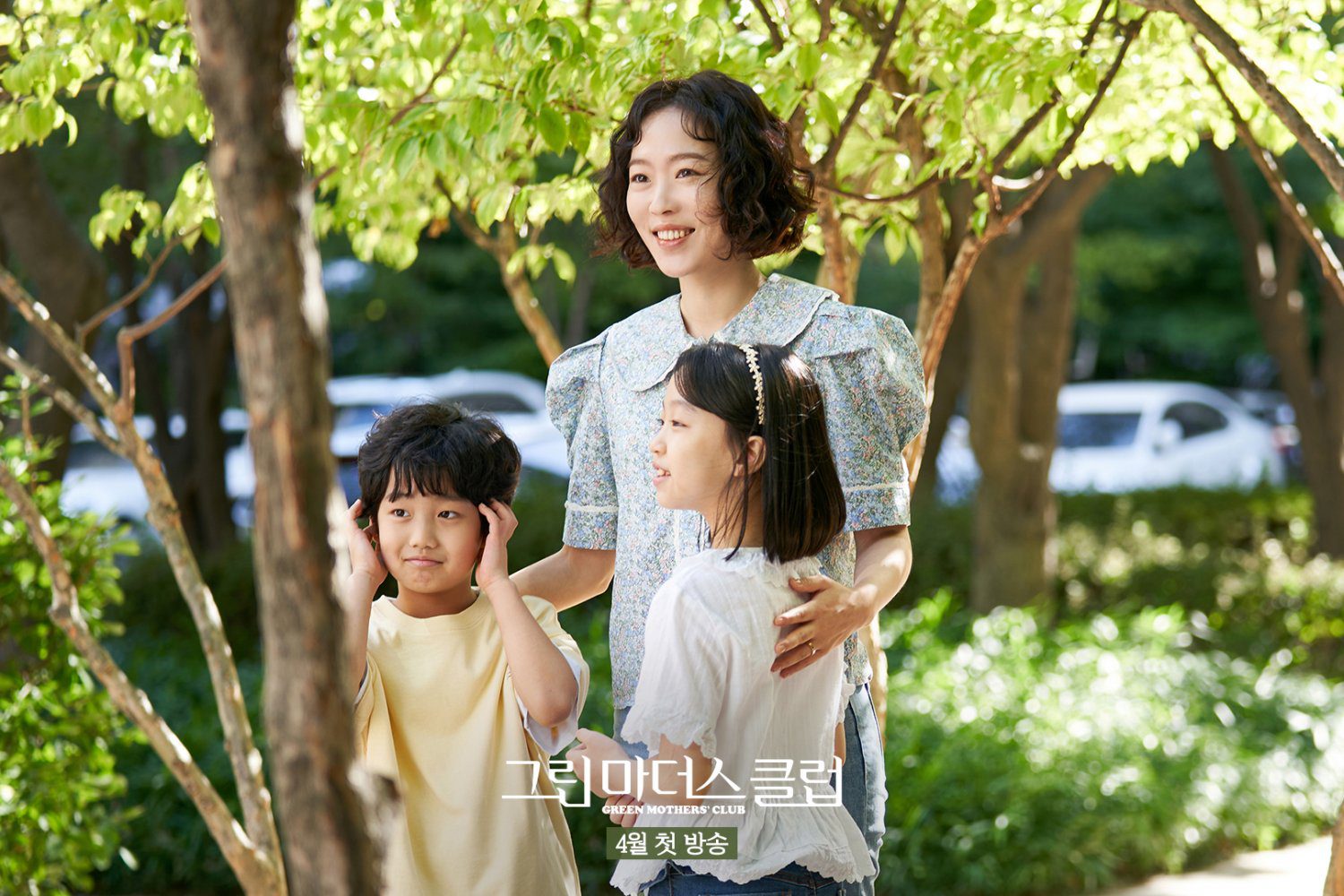 Along with Green Mothers Club stills, character sketches have also been revealed. Lee Eun Pyo is a highly educated mother who has studied Aesthetics at university.  Byun Chun Hee is the one who ranks first in both beauty and in having insider information about the happenings around her. Seo Jin Ha is Eun Pyo’s rival in present times but they used to be friends in their youth; she is described as a charming yet secretive character who is known as the “goddess” of the neighborhood, who has a foreigner husband. Kim Young Mi is described to be a ‘self-proclaimed woke mother’ who is bearing some grudge against Chun Hee; she thinks of herself to be different from the other moms but holds inferiority complexes in her. Park Yoon Joo is Eun Pyo’s cousin who is described to be bright and cheerful yet is ready to go to any lengths when it comes to the education of her children. Hmm, sure does smell like Desperate Housewives.

Also Read: Kdramas To Watch If You Are Single On Valentine’s Day, Based On Your Mood!

Release date and Where to Watch Green Mothers Club

The secret elementary community of mothers, ‘Green Mothers Club’, will open on April 2022 on the Korean TV channel JTBC. The drama is confirmed to be sixteen episodes long. We are yet to be informed of when the drama will be airing and which currently-airing drama it will be replacing. Meanwhile, you can see the list of 2022 Kdramas you can watch on Rakuten Viki.