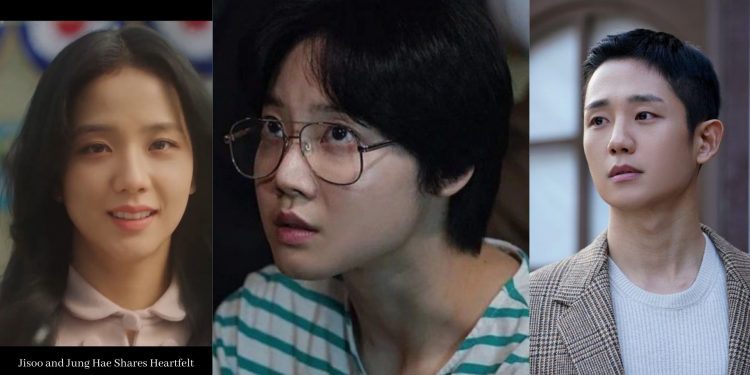 The death of Snowdrop actress Kim Mi Soo has caused the whole K-Drama industry a huge talent loss. The 31-year-old Korean actress and model passed away due to some undisclosed reasons. Her demise is being mourned by the whole Asian entertainment industry, and everyone has offered their condolence to her family and friends.

The tragic announcement was made by the Landscape agency through a statement that read, “Kim suddenly left us on January 5. The bereaved are deep in their sorrow at the sudden sadness. Please refrain from reporting false rumors or speculations so that the family can mourn in peace.” Further, they also wished for her soul to rest in peace.

Mourning the loss of their co-star, Jisoo and Jung Hae also offered their condolence and shared some of the heartfelt moments with her on their social media platforms. Let’s have a look inside.

The Moments Shared by Jisoo and Jung Hae

In the drama series, Jisoo played the character of Young Ro, who lives in the same room with Kim Mi Soo, who played the role of Yeo Jung Min. Jung Hae also shared some pictures with Kim Mi Soo. The cause of the actress’s death has not been shared by the Landscape agency. They reasoned that they were keeping the information private to avoid any kind of baseless rumors related to the late actress. Moreover, they also mentioned that they want the deceased’s family to mourn in peace without any more trouble.

The Character of Kim Mi Soo in the Snowdrop

Kim Mi Soo played the role of Yeo Jung Min in the drama series. Jung Min was a 4th grade in history at Hosu Woman’s University. She was one of those “test-takers” students in the university with rimmed glasses and tracksuits all-round the year.

Jung Min loved reading and most of the time stayed up late at night with her books in hand. But the dilemma was that she read gold books for under circle seminars, not major studies or exam studies ones.

In her eyes, Seol-hee, who is having thoughts of getting married, and Hye-ryeong, who is a free romanticist, are pathetic in her views. After finding out that the “daughter of a rice cake restaurant” Young-ro’s brother was forced into the demonstration, she started looking after Young-ro with strong affection.

Who is Kim Mi Soo?

Born on March 16, 1992, Kim Mi Soo operated under Landscape Entertainment. She made her debut in 2018’s Lipstick Revolution. After that, she also made an appearance in other South Korean dramas like Hi Bye, Mama, Drama Festa, Into the Ring, and Yumi’s Cells. Furthermore, Kim also was a part of big-screen movies like Memories, Kyungmi’s World, and The Cursed: Dead Man’s Prey.

Her career started peaking with her role in the JTCB drama series Snowdrop. She was playing the role of a cold and righteous student activist Yeo Jung Min. Although the show fell into the pool of controversies relating to alleged historical distortion still, her role was appreciated a lot by all the viewers out there.

Though everything was short-lived, and soon the news about her death was revealed. Moreover, Kim was also part of 2022 “Kiss Six Sense,” a Disney+ Original drama series. However, her role in the series was not revealed. The drama series was set to premiere in the first half of 2022. Though, with the sudden demise of Kim, the show’s scheduled filming was canceled. The next day the filming was resumed, but still, there was no revelation about whether they would recast Kim’s character or continue with the same. Later, it was revealed by the creators that Kim’s character was of a woman who discovers her ability to peek inside everyone’s future.

Also Read: Problematic Kdrama Characters That Followed Us to Our Nightmares