Jirisan ending reveals the final battle between the rangers and the killer! Although the ranger team wants to put the killer in jail, nature has played its own game, punishing the one who deserves it. Another worry that devours viewers is Hyun Jo’s fate. Episode 16 of Mount Jiri shows that Hyun Jo’s family has finally made their decision to put him off from life support and end his suffering. The family even goes to the mountain for hiking to share the adoration Hyun Jo has for the mountains. It is disheartening to watch Hyun Jo’s spirit last moment with Yi Gang. Jun Ji Hyun and Ju Ji Hoon have delivered their roles flawlessly as the needle and the thread of the mountain, making Jirisan more enjoyable!

The last episode shows Yi Gang uncovering the real culprit’s identity and finding evidence against him while alerting the remaining Black Bridge villagers about his plan. However, no one believes her. Eventually, with Hyun Jo’s spirit help, they find a piece of evidence! But before the police can catch him, the killer escapes and takes Yi Gang hostage. By the ending, Yi Gang also learns about the killer’s involvement in her grandmother’s death, wrenching her heart since she had once blamed Hyun Jo for her grandma’s death. However, some riddles have made viewers confused. So, let’s look at how Jirisan ending connects all pieces of the puzzles solving this fantasy mystery!

Jirisan Ending Explained – What Is The 1991 Black Bridge Village Incident?

The connection between the killer and Black Bridge Village is explained in Jirisan ending. In the 1991 timeline, Black Bridge Village, located in Mount Jiri, faces a huge crisis. The government reinforces the wildlife protection law, making the national park’s enforcement strict. Therefore, snake poachers and hunters face the aftermath of it. After all, it is the source of income for the villagers. Due to the national park legislation, it does not seem easy for people to collect herbs from the mountains. But it is not the case for beekeepers! Because the government has taken various measures to preserve aboriginal species of bees. Among villagers, only Kim Jae Gyeong and Lee Pil Seok are beekeepers. 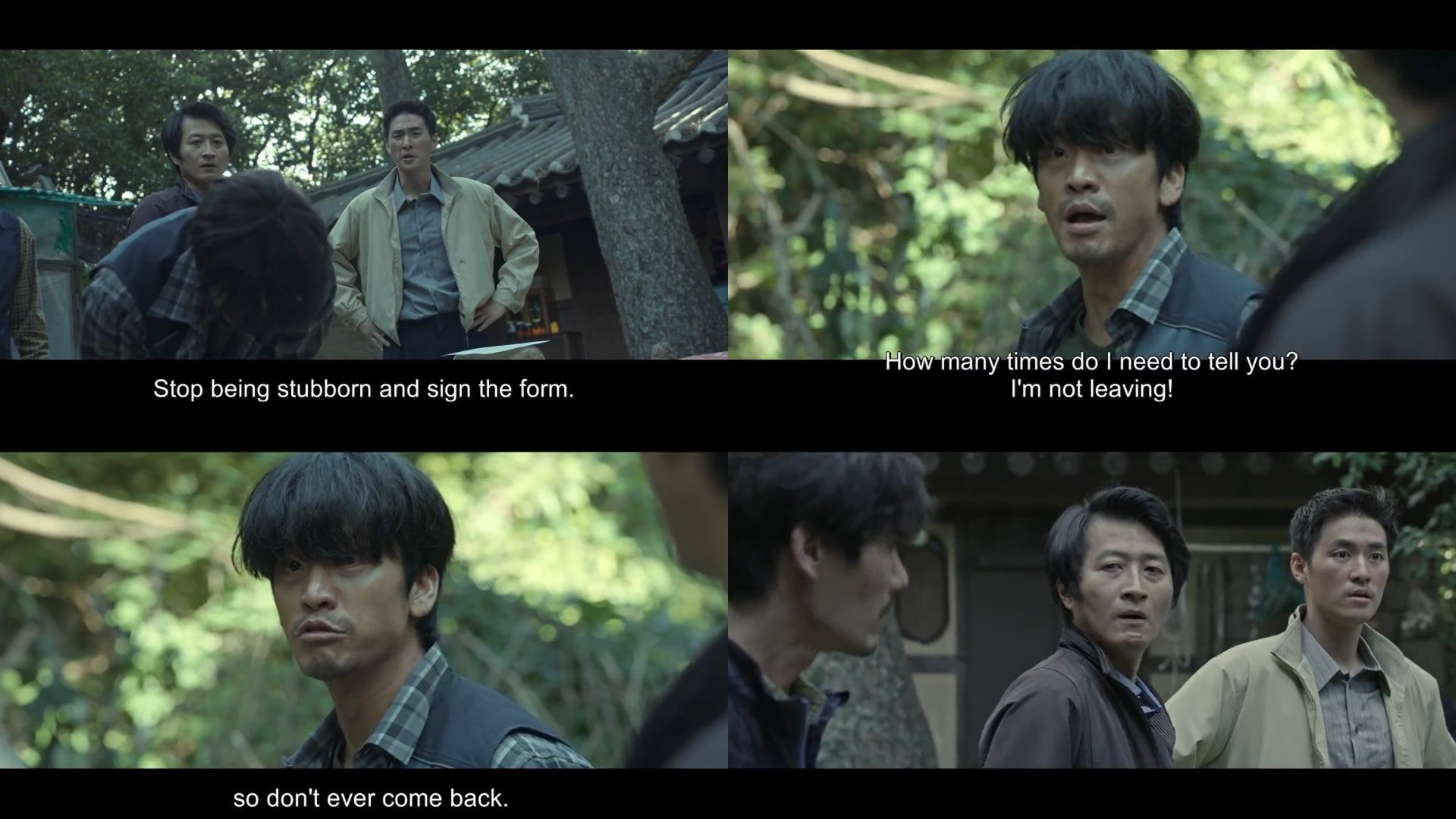 Therefore, when Yang Geun Tak brings the cable car project, the villagers seem delighted except Kim Jae Gyeong and Lee Pil Seok. Kim Jae Gyeong harshly rejects even the idea of leaving his village and refuses to accept their immigration plan. To receive authorization for the cable car project, they need all villagers’ approval. Hence, when all villagers sign the contract except Kim Jae Gyeong and Lee Pil Seok, the villagers decide to persuade Kim’s wife. And thus, they corner her to prove their side that all residents should leave Black Bridge Village. After all, except for beekeepers, everyone has lost their job as snake poachers and herb collectors.

However, Kim’s wife does not have any power to pursue her husband. She tells them to directly talk to her husband, which ignites a fight. During the dispute, one of the villagers pushes her off, and she ends up falling hard on a rock, losing her consciousness. The three villagers, Choi Il Nam, Lee Jong Gu, and Kim Jin Deok, misinterpret assuming she is dead. Later, they discover her body far away from the village route. Kim Jeong Gye losses his mind witnessing his wife’s death yet refuse to leave even after the villagers’ convincing. Eventually, Choi Il Nam destroys his beekeeping storage, killing all those bees which were Kim’s source of income. Seeing the fall of his business, Kim becomes mentally unstable and ultimately commits suicide. Afterward, the villagers discover that the government did not permit the project. Thus, the remaining residents leave Black Bridge Village.

One of the biggest questions many fans wonder about is how Yi Gang finds about the real killer’s identity. Jirisan ending has shown Yi Gang visits Kim Sol’s house to get some new clues against him. However, some viewers seem perplexed by her visit. Episode 15 of Mount Jiri discloses the possible suspects who might be the killer, Kim Woong Soon, and Kim Sol. However, after learning about Lee Se Wook’s father’s death, the mystery behind the killer’s real identity unravels! In 2020, while investigating the case, Jeong Gu Yeong discovers the secret of Se Wook’s father’s death, who died in a hit and run.

As we all know, Lee Se Wook was the killer’s accomplice! It turns out that Black Bridge Village had conspired against Kim Sol and Lee Se Wook’s fathers. Because Kim Jae Gyeong (Kim Sol’s father) and Lee Pil Seok (Lee Se Wook’s father) were partners in the beekeeping business. All villagers schemed against the head chief, Kim Jae Gyeong, and his family. For instance, Choi Il Nam accidentally pushed Kim Sol’s mother, who lost her life, ruining Kim’s beekeeping business. Lastly, they even killed Lee Pil Seok (Lee Se Wook’s father) in a car accident. At that time, the police had suspected Kim Seong Guk (Kim Woong Soon’s father). However, they could not find any clue.

Kim Sol was just an innocent kid but he saw how his family and parents ruined. 💔#JirisanEp16#Jirisan pic.twitter.com/ikTp9qhClK

Later the young Kim Sol coincidentally heard the villagers’ conversation that they had accidentally killed his mother and purposely ruined his father’s beekeeping business. He also discovered Kim Woong Soon’s father’s involvement in Lee See Wook’s father’s death. The young Kim Sol could not do anything and thus left to live with his relatives in the city. However, the hollow in his heart was never filled! Eventually, he decided to kill himself.

Therefore, Kim Sol roamed around the mountains with a poisonous yogurt but coincidently encountered Kim Nam Sik’s son Kim Hyeon Su (Hyun Jo’s colleague during the military training). Hyeon Su asked about his father’s well-being. Witnessing he did not even remember his father’s death and had moved on with his life, Kim Sol changed his plan and gave the poisonous yogurt to Hyeon Su! From then, Kim Sol teamed up with Lee Se Wook, and together, they began killing Black Bridge villagers to avenge their families!

Why Does The Killer Try To Kill Yi Gang?

Jirisan ending exposes all the cards, explaining each part of the storyline, such as why Kim Sol tries to kill Yi Gang. The drama shows Yi Gang, Gu Yeong, and Il Hae discovering the connection between Lee Se Wook, Kim Sol, and Black Bridge Village. Little by little, Yi Gang joins all those puzzle pieces and understands Kim Sol, who is going after the villagers. He has been taking vengeance against the people who abandoned their village, leaving him in endless distress. Furthermore, Lee Se Wook was no different after losing his only father. And thus, they worked together and began killing people in the mountains, disguising them as accidents.

To uncover further clues, Yi Gang and Jo Dae Jin go in the mountains, to the place Kim Sol may hide the lost articles of the dead people. After all, those lost articles can be strong evidence against him! However, it seems they are one step behind. At the same time, she sees Hyun Jo’s spirit leaving a new stone-twig marking and fading into the air. She understands that it is their last encounter! Immediately she realizes that the stone-twig marking shows the direction of the police station where they may find the clues. It reveals that Se Wook’s handphone is in the police’s custody after his death. Hyun Jo’s spirit witnesses Kim Sol burning down all the articles, and in that, he sees a book with a bee sticker which is also on Se Wook’s phone! 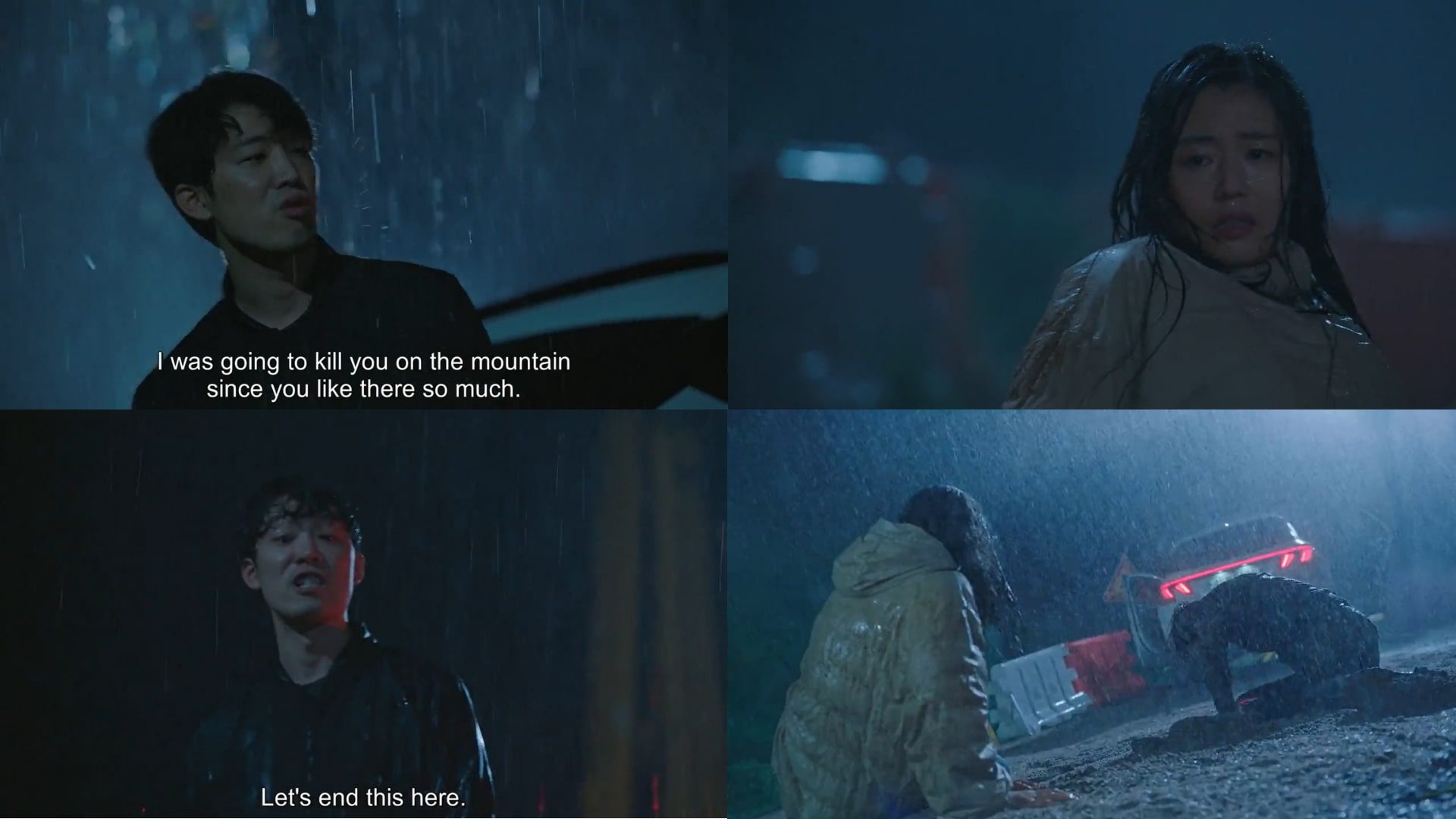 Who Will Save Yi Gang If Not Hyun Jo?

Eventually, the ranger team conducts a cyber test of Se Wook’s mobile and finds clear proof of Kim Sol instructing Se Wook to kill people. However, before the police can reach him, Kim Sol flees but attacks Yi Gang, who has destroyed his plan! To save herself, Yi Gang jumps from the running car. However, Kim Sol catches up with her. Before he can attack her, landslips occur due to heavy rainfall, taking Kim Sol’s life. As if the mountain brings justice!

Another concerning incident that makes viewers’ hearts throb in pain is Hyun Jo’s family’s decision. They finally decide to put him off the ventilator. Therefore, Jirisan ending reveals Yi Gang and Hyun Jo’s spirit meet for the last time on the mountain before the family put him off the life support.

After Kim Sol’s death, the drama takes a leap of one year. Jirisan ending shows that Jeong Gu Yeong finally passes the promotion test and becomes a team leader. He still holds strong feelings for his Lee Yang Sun. It is another heartbreaking scene to watch him breaking down while reminiscing their date and his promise to get promoted. Meanwhile, Park Il Hae returns to the ranger station and has been promoted to commander position since Jo Dae Jin has resigned from the post. Also, the lottery-ticket girl, Choi Hee Won, joins the ranger’s team to save people. It seems Lee Yang Sun’s accident has changed her life for good.

All the rangers go to the mountain peak point since it’s a new year, and there will be many hikers to watch the first sunrise of the new year. And finally, the writer gives a little surprise, showing Hyun Jo among the other rangers looking after the hikers! Jirisan ending shares after his family removes the life support, miraculously, Hyun Jo’s breathing returns. Yi Gang also completes her rehabilitation and now can walk on her own. Hyun Jo has also stopped seeing those visions. Therefore, by the ending of Jirisan, Yi Gang and Hyun Jo breathe in relief to see each other where they are supposed to be, in the mountains, beside each other!