As Jenny returns as Coroner in Season 4 Episode 2, she might have to face her replacement before completely taking over. 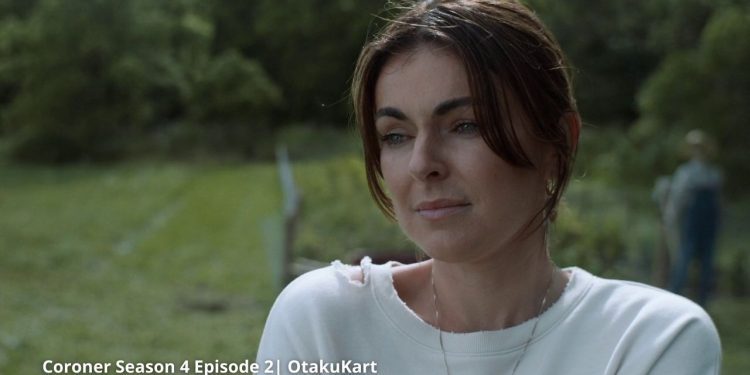 Coroner Season 4 Episode 2 may mark the return of Jenny to her job, but there is someone else sitting on her chair. So, the premiere of Coroner Season 4 was a huge hit as Donovan and Jenny found themselves recovering. Donovan returned to his job, but Jenny was still out there to come up living in a small town. Sometimes, you can’t run away from who you are. A  case came walking towards Jenny where she had to take the charge to save an innocent from going behind the bars.

Coming to Donovan, he was still worried a little about his cancer. So were his friends as he returned to his job. So Donovan’s team was not just dealing with a new case but also a new Coroner. Jenny’s replacement is everything but Jenny. So the team was kinda missing her as this new Coroner has his own strict rules that don’t go handy with them.

Previously on Coroner Season 4, Jenny and Donovan were pretty much at completely different places as the new season began. For Donovan, it marked his return to the job. Still, many of his close ones wanted him to be a little careful. Also, there is a new Coroner replacing Jenny, it’s Dr. Elijah Thompson. He has his own rules to work with. Coming to Jenny, she is far away in a small town from this.

So the first case Donovan and Abed are working on sees a woman named Collen who fell from a bridge and onto a net. There is bruising, she bled out, and chances of long-time abuse. Donovan talked to the women’s husband, and he confessed to a fight, but he didn’t kill her. He also mentioned a stalker stalking her. They had a fanbase as he was a writer, and she was an illustrator of graphic novels. Some of her illustrations also told the team about a stalker.

Also Read: What Does Station Eleven Season 1 Episode 10 Has In Store For Us in The Series Finale?

Amidst all of this, Donovan found about him being in remission. Donovan and Abed later approached a medical to figure out about the drugs Collen was taking. They noticed a hat and coat similar to the stalker in the illustrations. Collen’s husband came walking in with a gun to kill the pharmacist, but he confessed that he was only trying to help her. Marcus wasn’t ready to let go, but Donovan talked him out before cuffing him.

Meanwhile, back in Jenny’s small town, she saw herself busy solving the death of a local white boy named George. The suspicion quickly fell on a black man named Tyler. The body was found on his property. Tyler has been suffering from a traumatic brain injury. To help him, Jenny joined the case herself.

Jenny believes he was moved and not drowned. She came to find out that it was George who let himself bleed because he was sick of his father wanting to be a fighter. He believed Tyler could help him be one, but Tyler understood George better than his parents. Although he lost his son, George’s father was angry with Tyler as he grew to understand his son rather than changing him and turning him into a fighter. That’s why he moved George’s body to Tyler’s land.

Coroner Season 4 Episode 2 is releasing on 13 January 2022. It is titled “Cutting Corners”. The official synopsis of the episode suggests that after Donovan, it’s time for Jenny to return. So yes, she is coming back to her job as the Coroner, but she might end up clashing with her new replacement. Dr. Elijah Thompson certainly isn’t going hand in hand with any member of the team. So there will be some ego clashes. They can either work together, or one of them has to leave.

Coroner Season 4 Episode 2 is airing on CBC at 8:00 pm CST in Canada only. There is no news on the show’s international release, and it’s been so random, so we may have to wait until Coroner Season 4 finishes its original airing. A total of 12 episodes are coming for the fourth season of Coroner. So expect a new episode every Thursday following the second for Coroner Season 4.

Also Read: A Murder At A Golf Club Involving Team’s Own In Death In Paradise Season 11 Episode 2