Jason Momoa and Emilia Clarke Together? Emilia Found in Laps of Jason! 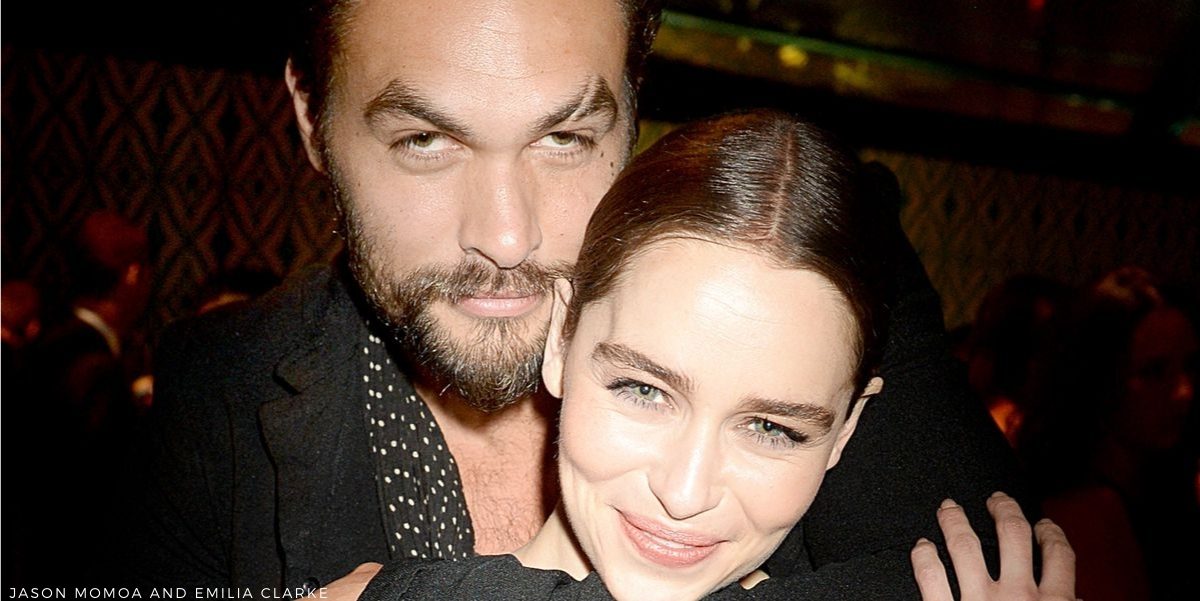 ‍Jason Momoa and Emilia Clarke dating? Emilia Clarke and Jason Momoa’s bond is no less than that of a bee and honey. But they aren’t dating! Here’s another reunion in the Hollywood world! Well-timed cleverly posted Instagram pictures created all the clumsy stuff and had left the fans puzzled that whether Jason Momoa and Emilia Clarke are dating in real? Unfortunately, theirs nothing like this in actuality because Jason is already married to the actress Lisa Bonet. Though the on-screen love birds Jason and Emilia as Khal Drogo and Khaleesi have received love and applause in every corner of this world, outside the reel life, they are just good friends.

But this doesn’t mean that we have to be sad because they never step back in amazing us even outside of the reel world. And their latest Instagram posts have enough potential of doing so. The way both of them had posed for the pictures would again make you fall for them. The manner in which she got fitted in his lap would remind you of the scenes of the first season of the Games of Thrones. Their naughty yet intimate pictures are creating debates over the internet that are Jason Momoa and Emilia Clake dating?

On Sunday 15th August 2021, both the Game of Thrones stars took to their Instagram accounts to share their beautiful reunion pictures. Showing Emilia in the laps of Jason. From the sets of Games of Thrones to the present time, they both are great friends. And these birthday pictures are the proof.

Starting with Jason Momoa, he posted three pictures of him and Emilia. Where in the first two, Emilia was clutched in his laps. And in the third one, he had lifted her in a frankly mischievous way. In one of them, he was found wearing the Captain’s hat. One thing which was common in all the three photos was the Golden Scrunchie in his right hand, which probably belongs to her.

Now let’s talk about Emilia Clarke. Well, she has posted only a single photo in which he had lifted her. Their twining smiles had added beauty to their naughty photograph. Their love and care towards each other could be easily judged by the captions they have written.

She wrote – When your sun and stars roll into town, you check that he can still bench press a Khaleesi.

The Aquaman star Jason Momoa and Me Before You star Emilia Clarke started warming each other’s hearts from the HBO’s sets of Games of Thrones. Though he had left just after the first season as his character Khal Drogo have died, their chemistry and bond are still on flame. And today also gains attention from all the folks around the globe. Their naughtiness and passionate love were all that the public has loved. And this sudden adorable post served as honey over their pancakes. Their smiles made the day of their fans, and the puzzling question enveloped the internet air that is Jason Mamoa and Emilia Clarke dating? But apart from the bond they share, he is a family man who has a loving wife. And so theirs’s no chance of any extramarital affair. And hence their fans have to limit their expectations only up to the reel world. Theirs no possibility to see something real.

Jason Momoa and Emilia Clarke might not be dating, but their bond is worth talking about and gossiping about because that’s what the internet wants! Their new Instagram pictures would serve perfectly to the #bff goals. Which probably every internet sensation would love to have. Not just to provide hot gossips but also to enjoy those naughty moments.

Most celebrities want their love life to be private. And hence rumors cover the space! After all, being in the limelight is not a simple task. And to maintain that stardom is even harder! Despite all this, in 2018, this 34-year-old British actress had dated American film director Charlie McDowell. But hardly their relationship had worked for a year. Before this, in 2015 she had dated Aussie actor Jai Courtney. One of her most eye-catching relationships was with Gotham star Cory Michael Smith, back in 2013.

Now about the marital relationship of Jason. Four years ago, in 2017, he took the marriage vows with  Lisa Bonet.  The 42-year-old actor and his loving wife met in 2005. Lisa is 53 years old. But despite this large 11 years age difference, the love pond is never empty!  They have two children, first a girl in 2007 then a boy in 2008.

Are Tristan And Mia Still Together, What Happened Between The Reality TV Couple?

Who Does Banri End Up With In Golden Time?