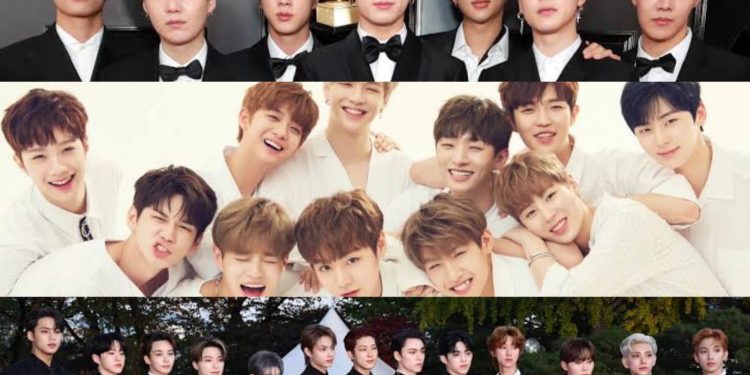 The boy group brand reputation rankings for January 2022 are in! The Korean Business Research Institute analyzes data each month to put together this list of brand reputations. Every month, they release a list for boy and girl groups separately. The data analyzed is computed based on various factors like communication, consumer participation, community, interaction, and media coverage.

The rankings for January 2022 are here and include a score date of 61,966,657 compiled between 8th December 2021 to 8th January 2022. The hottest boy group in the world, BTS, takes the spot at number one yet again. The other groups in the top 5 include SEVENTEEN, NCT, Wanna One, and EXO. Other groups that made it to the top 30 include ENHYPEN, TXT, Super Junior, Shinee, Ateez, SF9, and BTOB. The list ranks 2 PM, The Boyz, Astro, Monsta X, and Stray Kids as ones taking the spots between numbers 6 to 10 in order. Here is all you need to know about the January brand reputation rankings for boy groups and all the ones that made it to the top 5.

BTS bags the first position on the January brand reputation rankings for the 44th time in a row this month. Their score amounted to a total of 11,027,000, which saw a 26.30% increase since that of the previous month. It is no surprise that they are at the top of the list, considering how hot they are right now. Among the high-ranking keywords associated with them were ‘Billboard’ and ‘COVID’. This barely comes as a surprise as BTS’s achievements on Billboard make news every now and then. Over the course of last month, member Suga garnered much attention and concern as he tested positive for COVID. Well, people wishing for him to recover soon were all over social media.

Seventeen managed to maintain consistency by protecting their spot at number two on the list. Their score this month saw a rise by 3.51 percent since last as it totaled to 3,665,984. Seventeen created a buzz over the past month, and member WOOZI dropped a mixtape. It received a highly positive response from the fans. Member Seungkwan also received his first award, a Daesang, on an award show in December 2021. He is well-known for his abilities in the variety and entertainment sector, and these skills secured him the award for Male Idol Entertainer at the 2022 Korea First Brand Awards.

Making a comeback on 14th December, NCT sparked talk on social media. They secured the third spot on the list of the January 2022 boy group brand reputation list with a score of 3,643,859. The group saw a 52.05 percent rise in the score since December. All the fans loved their return with a 3rd studio album, ‘Universe’. This album was special as it included participation from 21 out of 23 NCT members as a part of NCT 2021. Though members Lucas and Winwin couldn’t join in the making of this album, it was something much looked forward to by the fans.

Wanna One saw a sharp rise in their brand ranking for this month with a score of 2,944,370. This group has been a nation’s favorite and dearly loved worldwide as well for the short period they were together. However, their impact is still unbelievably strong. When fans heard that they might be re-uniting for the first time in 3 years for a stage at MAMA 2021, there was an uproar online. Fans were super excited to see them on stage again. It was reported that Wanna One’s stage on MAMA got the highest viewership amongst all the artists that performed that night. This justified their high spot on the January 2022 boy group brand reputation list.

Exo members are always in the spotlight. The boy group secured the fifth spot in the top five by achieving a score of 2,447,571. Many of the members in Exo are ambassadors for top Luxury brands and make the news or appear on magazine covers often.

Kai recently had a comeback, and Xiumin’s appearance on Amazing Saturday has had fans talking of them a lot on social media.