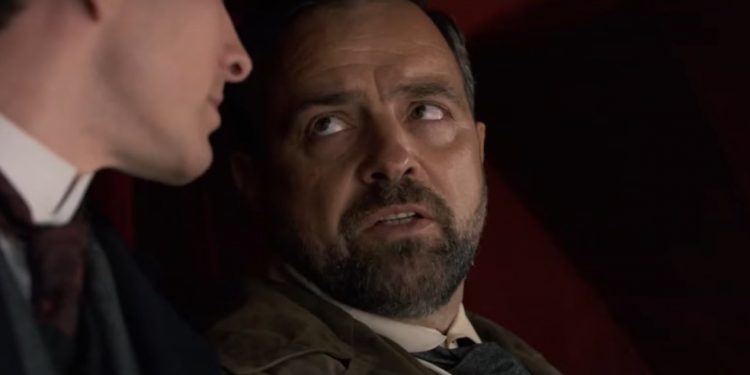 When is Vienna Blood Season 2 Episode 4 coming out? Will it release at all? Firstly, if you’re not familiar with Vienna Blood, it’s a psychological thriller created by the BBC based upon the novels by Frank Tallis. Secondly, the series follows a doctor in Vienna who studied under the prominent psychiatrist Sigmund Freud as he assists a police detective in solving some crimes.

Sherlock’s screenwriter Steve Thompson was commissioned by the BBC to write and adapt the script for this limited series. Thompson’s talent and knowledge of the Sherlock character will serve him to bring alive the character of Max Liebermann and Oskar Rheinhardt. Now, without any further ado, let’s begin taking a look at this show here at Otakukart.

Jürgen Maurer, an Austrian actor, plays Oskar Rheinhardt, a tricky and quirky police officer with a troubled past. Oskar is eager to solve the cases and show his worth to his bosses. ‘Vorstadtweiber’ and ‘Tatort’ are two of Jürgen’s notable works. Dr. Max Liebermann, played by Matthew Beard, is a rathe-ripe man from a wealthy English-Jewish family that owns a trendy clothing shop. Max is also a big fan of Sigmund Freud. Matthew is known for starring in the films ‘One Day’ and ‘The Imitation Game.’ One of the best aspects of the show is the mismatched detective duo’s love-hate relationship.

‘Vienna Blood’ also has an impressive supporting cast. Led by Luise von Finckh as Max’s highly social and cheerful girlfriend Clara. She is best known for her role in the German television show ‘Gute Zeiten, schlechte Zeiten.’ Conleth Hill plays Max Liebermann’s father, Mendel Liebermann. He despises his son’s line of work and is dealing with rising nationalism and anti-Semitism. Max’s mother Rachel Liebermann, played by ‘Coronation Street’ alum Amelia Bullmore. She is proud of her son’s knowledge but disapproves of his collaboration with the law.

Charlene McKenna joins the cast as Max’s older and more sensible sister Leah Liebermann, a divorced mother who snarkily criticizes her brother’s behavior. Charlene is well-known for her roles in ‘Ripper Street’ and ‘Peaky Blinders.’ Amelia Lydgate, an enigmatic English scientist, is played by Jessica De Gouw. Amelia is sharp-witted and spirited, but she seeks advice from Max when dealing with past trauma. Jessica has appeared on ‘The Crown’ and ‘Arrow.’

Where to Watch Vienna Blood?

Vienna Blood Season 2 Episode 4 isn’t happening. Why? Beacuse the show is a three-part miniseries. Firstly, episode three marks the final installment of the second season of this British production. Secondly, the third episode was titled “Darkness Rising” and it was released on November 1, 2021. Lastly, every episode goes at 90 minutes run time.

The third episode of this series is titled “Darkness Rising”. Firstly, it marks the season finale of the sophomore installment of Vienna Blood. It was directed by Robert Dornhelm out of a script by Steve Thompson. Secondly, it goes for one hour and thirty-two minutes runtime. Moreover, the episode goes about the death of a monastic scholar. A brutal one that is up to Oskar and Max Liebermann to investigate.

As our police and doctor duo embark on their investigation. All signs and clues point to a certain religious fanatic. A Jewish man who had chastised the monk for spreading anti-Semitic remarks in his teachings. It came up to Max and Oskar to come up with who committed the murder. To do it, the duo had to understand the inner workings of monastic life. With this, we conclude our coverage of Vienna Blood Season 2 here at Otakukart. Thanks for joining us. And keep coming back for more daily updates on all your favorite series, shows, and movies.

‘The One and Only Episode 6’: What’s Next in The Trouble List?