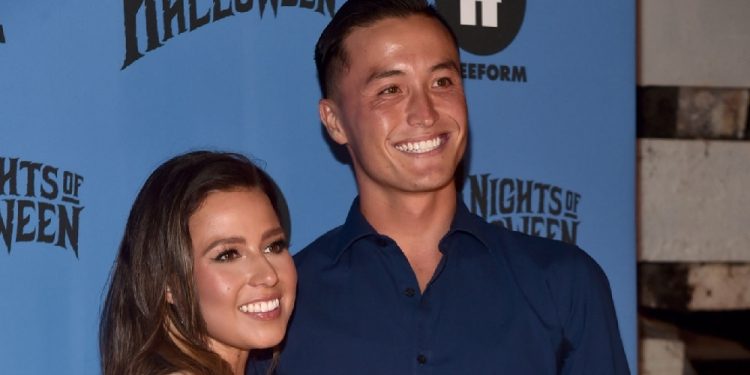 Just weeks after announcing the end of Katie’s relationship with Blake Moynes, it seems that Katie Thurston has confirmed her relationship with another contestant of her the show. Is Katie Thurston Dating John Hersey? Before we get into the detailed description of Katie Thurston’s dating John Hersey, let’s talk a little about Katie Thurston. Katie Thurston is a famous American television star, growing fashion model, Instagram, TikTok star, and social media influencer. She is known for her outstanding performances in the 25th season of The Bachelor and the 17th season of The Bachelorette. She is also famous for posting great photos and cute lip-syncing videos on Instagram and Tiktok.

Katie grew up with her parents and siblings in Lynnwood, Washington. As a child, she graduated from Lynwood High School and later transferred to the university to complete her bachelor’s degree in finance and marketing. She received initial recognition on Instagram and TikTok for her eye-catching photos and videos. Katie Thurston’s estimated current net worth, as of 2021, is over $950,000. Her sources of income are mainly from TV shows, brand promotion, modeling, and advertising. Green and orange are her favorite colors, whereas her hobbies are writing, reading books, traveling, dancing and photography. She is an animal lover and has pets, and Spain is her frequent travel destination.

Is Katie Thurston Dating John Hersey? Well, Katie Thurston has found the love of her life again. Despite recently ending her engagement to Blake Moynes, Katie now seems to be seeing another man from her season of The Bachelorette. Katie and John Hersey have been friends since filming ended and now seem to have taken their platonic relationship to the next level. Although Katie did not verbally confirm the news, she hinted at the romance with John while playing an Instagram game titled “12 Days Of Messy” with fans. Over the past few days, Katie has dedicated a song from her Taylor Swift’s Red album to various men of her season.

The song was called “Begin Again,” and the man featured was John, who had previously been eliminated by Katie in the second week of filming for The Bachelorette earlier this year. Along with the music playing in the background, Katie shared a video of herself flying behind John’s plane. This shocking turn of events came less than a month after Katie announced that she and Blake had broken up. Blake was Katie’s final choice on The Bachelorette, and they got engaged during the finale, which was filmed in May and aired in August. Unfortunately, the relationship was short-lived.

John Alex Hersey appeared in season 17 of The Bachelorette and impressed Katie Thurston in the show’s first episode. He announced shortly after their meeting that he was her “type.” Unfortunately, John was eliminated during the second week of the show after Katie decided to send him home. However, the couple became good friends off-camera, and their friendship has now turned into a romance. On December 22, 1993, John was born in California.

John is an ambitious pilot and is training to get get the license of a pilot. John is a graduate of the University of California with a bachelor’s degree in marine biology. He currently works as a bartender in California and is often involved in exciting activities such as surfing, hot air ballooning, and skydiving. According to his biography in The Bachelorette, John values ​​loyalty, honesty, and mutual respect. John is also a vegetarian and owns an Italian greyhound named Dexter, which makes a lot of appearances on social media.

Katie kick-started her career as a bank marketing manager at a local bank in her hometown just after graduating with a bachelor’s degree in finance and marketing. Thanks to her extraordinary talent and skill, that she made a name for herself in the bank for a short time. Prior to her popularity, she worked at First Financial Northwest Bank. Katie gained her initial popularity as a content creator on TikTok and Instagram for her beautiful and attractive lifestyle photos and fun lip-syncing videos. In no time, she amassed millions of followers on her Instagram and TikTok as her photos and videos went viral.

In 2021, Katie made her appearance in season 25 of the American reality show named The Bachelor, where her performance was remarkable, and she finished in 11th place. That same year, she appeared in season 17 of the dating show named The Bachelorette and shared great chemistry with Greg Grippo. With her growing popularity as a television star, Katie is the face and promoter of various fashion, sports, makeup, and clothing brands, including JuneShine Hard Kombucha, Vici Dolls, Princess Poli Boutique, TLF, and many more. It can be assumed that many digital magazines will soon feature her on their front pages.