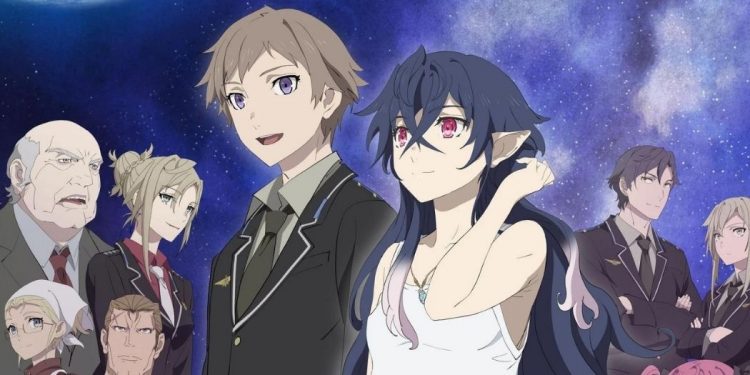 Irina: The Vampire Cosmonaut Season 2 : Is it going to happen?

We all have started marking the finished and yet-to-watch series on our watchlist. As the new year is just one day ahead, we are all set with our supplies of snacks and popcorn to start watching the new releases of 2022. Where some series are completely new, some of them are sequels and continuing seasons of series. Talking about the continuation, The Irina: The Vampire Cosmonaut series is making a comeback with its Season 2. If you are into sci-fi and loves to watch the space adventure, that this series is for you. Even though the series was not so popular and was an average-grossing one, it still managed to get a place in the hearts of so some viewers.

Yet, there is demand for season two by those fans. Irina: The Vampire Cosmonaut wrapped up as an anime series of Fall 2021, and there are some expectations for having a new season of the series. Tsuki to Raika to Nosferatu, also known as Irina: The Vampire Cosmonaut, is a Japanese manga series from the genre of science fiction fantasy drafted by Keisuke Makino and demonstrated by Karei. The manga was officially published by Shogakukan and was published in English by Seven Seas Entertainment. The series is expected to give the viewers a surprise this coming year, let’s see what it has in store.

The Japanese manga series that is the creation of Keisuke Makino gained its anime adaption by Arvo Animation Studio. The series debuted with the first episode of its first season on 4th October 2021 and rapped up as Fall anime on 20th December 2021. The first season of the series was the produce Arvo Studio, which is known for getting into a collaboration with Silver Link for producing We Never Learn! Bokuben series. The studio gained recognition with its very first big project Moster Girl Docter anime (2017).  Irina: The Vampire Cosmonaut Season 1 was the result of a team of directors working together, Akitoshi Yokoyama, known for his previous world Cutie Honey Universe and Photokano. He was assisted by an assistant by Taishi Kawaguchi, who worked previously on Moster Girl Doctor, We Never Learn! Bokuben and it was indeed a good combination as they both gave out great results.

The opening song of the anime series that was loved most, titled “Scarlet Moon” was performed by Ali Project, and the ending song titled “Everyday Someday” credit goes to Chima. The cute and beautiful characters were designed by artist Miromi Katou which acted as one of the best features of the anime series. All efforts of these people together summed up into a great work which we call know as Irina: The Vampire Cosmonaut.

Before getting started with the subject matters, we are going to get to know the protagonist of the series, who we are going to witness in the whole series. Irina Luminesk can also be called the female protagonist of the series, is a vampire girl who lives in a small village called Anival in the town of Lilitto. The character has a strong to become a cosmonaut and visit the moon, but the world they are living in is no different from the actual world. In their world, a vampire is a very common breed yet considered cursed and inferior to humans. Irina being a vampire have pale skin but looks very beautiful, with long blue hair, pointy ears, and red glowing eyes.

While describing her personality, she is a complete tsundere who clearly developed a good amount of feels and concern towards Lev yet refused to get in close with him. This nature of her clearly shows that she doesn’t like humans and doesn’t want to fall for a human guy. Her memories of the past still traumatized her, witnessing her whole village and parents getting slaughtered by Russian humans. After this, she also developed a personality that doesn’t stand against insults by others and always gives a befitting reply regardless of the status of the person standing opposite to her.

Lev Leps is also known as the male protagonist of the series Irina: The Vampire Cosmonaut. He is the Lieutenant in Air Force and a human by breed. At the beginning of the series, you will witness him volunteering as a Cosmonaut Candidate but was later demoted as he got into issues with his superior officer. Lev is the one who was assigned as a caretaker of Irina and give him good training to become a Cosmonaut. Lev has the looks of an average young man with short brown hair and purple eyes. Throughout the series, you will either witness him wearing his military uniform or training gear. Lev, unlike another human you will see in the series, is quite different and have a strong sense of justice even towards a vampire breed. This leads him to get fascinated by Irina and start admiring her finally falling for her.

Even though Lev saw Irina with respectful and loveable life, Irina always considered him as another human who treats Vampire as tools or toys. Initially, Irina always thought that Lev is just sent to train a lab rat to get experimented on and disliked him. However, as time passed, Lev showed his caring side to her, and their bond started to warm up.

The plot of the series was centered around the life of a Vampire girl who become the first woman in space. The series is set up in the post-World War II Era in the year 1945, the scenario is quite similar to the actual conditions after world war II. When the world was divided into the Soviet Union and the United Kingdom, In the anime series worked was divided into two superpowers, namely the Republic of Zirnitra and the United Kingdom of Arnak. As both regions want to establish their supremacy, they look towards space to expand their hegemony. Where the United Kingdom of Arnak was still planning to make a move, the Republic of Zirnitra was already possessed their trump card, a Vampire girl named Irina Luminesk.

The adventure follows the process of sending Zirnitra into space as a test subject of the research to achieve human spaceflight. She was set under the guidance of Lev Leps, who is a young cosmonaut who was there to make sure her training does well. However, Lev Lep s was ordered to treat her as a test subject and nothing more than, but Lev can’t stop himself from admiring the vampire girl.

The Season 1 of Irina: The Vampire Cosmonaut ended with the final episode 12 of Season 1 on 20th December 2021. Fans were disappointed by the fact that it ended but have a little hope for getting the series renewed as Season 2 soon. As for the release date of Irina: The Vampire Cosmonaut Season 2, neither Arvo Animation Studio nor any other Studio or publications who are indulged in the production has confirmed the comeback of the series. There is no official news or any word from the writer of the producers about the series getting renewed as a Season 2. However, this fact is not going to prevent us from speculating the possibilities of having a season 2, so now we are going to make raw predictions and see what will happen.

As there are no exact announcements in regards to Irina “The Vampire Cosmonaut Season 2, we are going to speculate the possibilities when the series can drop out. The major thing that increases the chances of a series to return is its plot and how original and unique it is. The plot of the series clearly has many things unique, like sending a vampire girl to space in the post-World Ware II Era. It is quite interesting to witness the original scenario getting animated, the tension between USSR and USA has been depicted as the tensions between the Republic of Zirnitra and the United Kingdom of Arnak. This will give an idea to the people who always wanted to witness that tension. But the storyline cannot only decide whether a series deserves to come back or not.

During the initial period of the series’s screening, it was witnessed that it had a slow lift-off as the tension in the story didn’t start to break off even in the initial three episodes. This leads the series to get labeled as boring because of its very slow progress in the plot. Hence, this resulted in a lot of fans losing interest and then quitting watching it. Due to this reason, the light novel of the series didn’t get to get at the top 10, and even Funimation wasn’t able to collect a high revenue over it. Therefore, it is very difficult that the studio will plan the production of Season 2, neither Funimation is going to demand its comeback. Still, everything depends on the final verdict of the production company.