‘Industry’ Ending Explained: How Does The HBO Series end?

Working in a competitive environment can get toxic at times. How far can the employees go to keep their jobs in a corporate world? Industry is a show that shows the reality of working in such a workplace. 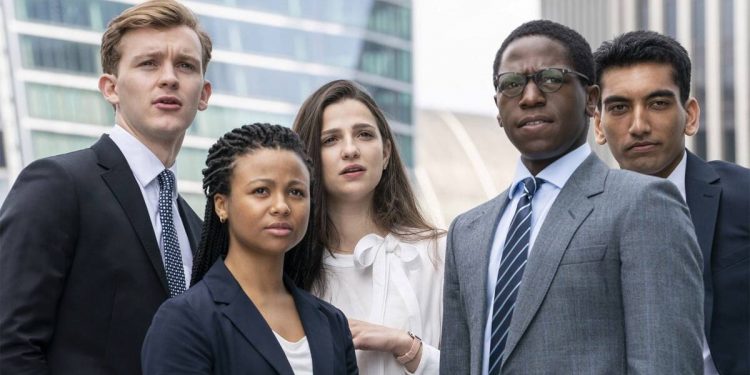 A still from 'Industry'

The HBO series ‘Industry’ has an ending that needs to be explained. The show portrays the reality of working in a corporate world. There are people who are in high positions, and they misuse their powers. All of it is shown in this series. From the boss being a total narcissist to new recruits going to any measure for a permanent position in the company, the show is full of twists and turns. The story follows a bunch of recent grads competing for a spot in that lucrative industry. There is deceit and betrayal in the series. A lot of office politics is shown. The main characters of the show are played by Myha’la Herrold, Marisa Abela, Harry Lawtey, and Jason Smith.

Over the course of the eight episodes, the series shows how the high-end banking business, with all of its appalling lack of ethics, has infiltrated four graduates: Harper, Yasmin, Robert, and Gus. The final episode is judgment day. The young grads must give a statement to their superiors about why they should be recruited, which is shown on TVs throughout the trading floor. Who gets the job? What happens in the ending? Let’s dive into it.

The HBO drama depicts the trading floor and the young adults who can make or lose their careers. All while making multi-million dollar/pound deals over the phone, we meet the fresh cohort of grads who are being launched into Peirpoint, an exclusive, exclusive investment bank, in the extremely grey-toned show set in London.

Harper Stern is an American black girl with braids and a nose ring. Hari Dhar is a desi boy. Gus, an Etonian, and is an Oxford graduate. There is a token white boy from a public-school-working-class background. To top it all off, there is a supremely privileged girl with an inheritance that ensures she doesn’t need her paycheck.

Bullying employers by making them work very hard, impossible deadlines, and obnoxious clientele are all part of the tough corporate world shown in the series. The trailer offers an inside insight into the world of high finance and trade. The graduates and their tumultuous lives are front and center of the show. The eight-episode series follows a group of fresh graduates as they compete for permanent positions at London trading business Pierpoint & Co. However, with the financial crisis of 2008 still fresh, it won’t be easy.

The story revolves around Harper Stern. She is a brave and ruthless girl. She lies about graduating from a state school and stuns everyone with her intuitive flair for the job. We follow Harper on a roller coaster of drugs, competitiveness, and significant financial losses over the course of the season. Nothing, however, could have prepared the audience for her ultimate betrayal, despite her unpredictable personality.

How Does Harper Mess Up And Who Ends Up Getting The Permanent Position?

In episode four, Harper makes a blunder that costs the company £20,000, which grows to £140,000 when she makes a rash attempt to recoup the funds without informing her boss, Eric. It’s a horrific scene to see, and the creators saw it as an opportunity to reveal Harper’s more brutal side.

Sara and Daria, the grads’ program supervisors, contribute to the poisonous atmosphere. They focus on their own personal benefits rather than building a healthy work environment. Sara is more concerned with the company’s public image. Daria manipulates Harper into aiding Eric, their boss’, termination. To make matters worse, Harper informs Daria that a client has harassed her, prompting Daria to warn Harper that “she’s not thinking straight.” Harper recognizes that they are replicating the same system that has held Eric at Pierpoint for so long. Eric also kept an eye out for Harper when Daria didn’t. Favoritism can be seen going a long way in this egotistical workplace. Now, who locked their position in the company, and who was shown the door at Pierpoint?

What Happens On RIF Day?

In episode 8 of Industry, RIF (Reduction in Force) day approaches. Decisions are made about which interns will be retained at Pierpoint. Harper’s chances aren’t looking good after she chokes up during her final interview, but Daria reassures her coworkers that she’s the appropriate fit for the organization.

Before Daria can tell Harper that she has the position, she is summoned to see Adler. Adler persuades her to withdraw her charges against Eric in order to maintain him and his lucrative accounts at Pierpoint. In exchange, Adler promises Harper tremendous benefits in the company.

Harper’s choice isn’t revealed right away, but Daria is summoned to see Adler in the following scene. Harper’s final words to her are “I’m truly sorry,” knowing that she’s about to lose her job. Harper decided to back Eric’s comeback in order to promote her own career prospects. Harper’s choice is understandable in light of who she is. She wants to move up at Pierpoint and is willing to do whatever it takes, even if it means making a few individuals’ lives hard.

When Harper’s friend and coworker Yasmin discovers what she’s done, she is disgusted with her. It is because Yasmin previously struggled to live with the chauvinist atmosphere and inappropriate behavior that Eric built at Pierpoint. When Harper retaliates by calling Yasmin weak and hypocritical, their friendship appears to be finished for good.

Harper walks around the streets of London, glancing at a notepad that Yasmin gave her with a sweet message that read, “Here’s to (y)our futures”. She is seen contemplating the reality that she’ll have to do it all alone from now on.