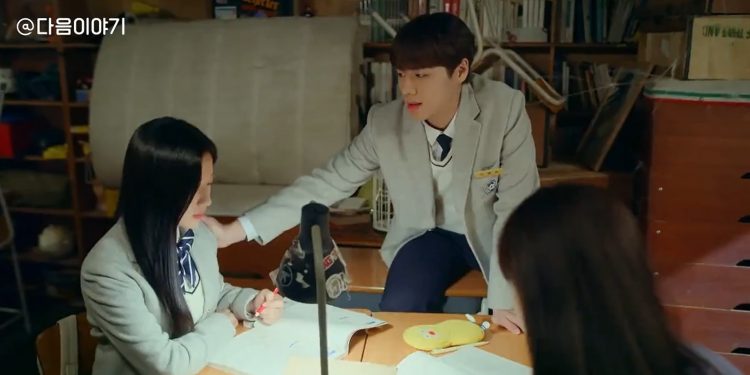 Shin Sohyun and Han Yeji’s friendship may be put to the test in Episode 14 of User Not Found. In the preview for episode 14, we can see that Hyejun urges both the girls to come clean about their secret. It seems not only this, but Jiwan will be adding extra pressure to the situation as well. She singles out Daye and feeds her with information that seems to put Jiwan’s clique against Minjae.

With Hyejun and Yijoon’s relationship becoming increasingly fragile and Han Yeji having trouble staying as the unpopular Minjae, things might be heading South sooner than we imagined. Yijoon and Minjae may have opposing appearances and first impressions, but on the inside, both of them have similar soft hearts. They don’t wish to hurt others and also struggle to express themselves properly. This has led to a lot of miscommunication and misunderstandings between both of them so far. The fans are very curious to see how they will tackle this problem in the future so that Jiwan and Hyejun’s tricks don’t get in their way. Will Yijoon still have warm feelings towards Minjae after he finds out the truth behind her identity?

Also Read: The Golden Disc Awards 2022: The Winners & The Highlights!

When a confused Shin Sohyun seeks Han Yeji out for advice, she gets told off properly. After Sohyun tells her everything that happened between her and Jiwan, Yeji scolds Sohyun for being a pushover. Upon hearing the advice Hyejun gave her, she gets very mad at him and immediately gives him a call. Yeji curses him out over the phone for saying what he did to her on purpose. She then asks Sohyun to go join Jiwan and Yijoon at the theatre.

As the unexpected double date begins, the start is marked by a shooting game. The boys give a go at it and do a decent job. Hyejun asks Minjae if she wants to give it a go, and she seems eager but says she has no prior experience at it. However, after receiving mild guidance from Hyejun, Minjae stuns everyone with her performance. It seems like she is a true marksman, and everyone cannot help but be amazed by her. Yijoon’s eyes carefully follow every movement that brings Hyejun and Minjae closer, and he seems extremely bothered by it. When Hyejun asks her for a high-five, he shyly asks for one too.

As he witnesses Hyejun get closer to Minjae on their date, Yijoon cannot help but feel jealous. Throughout the movie, he pays more attention to both of them than he does to the screen. He can’t stop wondering about what they are talking of and more as it is written clearly all over his face. The fans found this a very cute moment and long to see more of jealous Yijoon.

As he whisks her away from Yijoon and Minjae with the excuse that they travel home in the same direction, Jiwan cannot help but be confused and part angry. She asks Hyejun directly why he did what he did. Hyejun replies to her coolly, asking her why she is putting in so much effort when she doesn’t even like Yijoon. He subtly lets her know that she lied about receiving a confession from Yijoon and points out that he knows she doesn’t like Minjae. Jiwan doesn’t bat an eye-lash as she reiterates his jab by questioning his feelings towards Yijoon. She points out that she knows he doesn’t like his cousin too. Things end on a sour note, as Yijoon suggests putting a stop to the conversation before it gets ugly.

What To Expect From Upcoming Episodes

The upcoming episodes of User Not Found will take the viewers through a lot of stories of the past. Both the Minjae’s have gotten quite close lately. However, this bond looks like it will be tested often in the future.

User Not Found Episode 14 will be released on January 15, 2022. Fans are super excited to see what the next episodes will have in store for them. Make sure to tune in on the weekend to find out!

Where to Watch User Not Found Episode 14?

User Not Found is available for streaming on Viki. Most viewers are speculating Hyejun’s true intentions. Despite Minjae’s warm words to him as they watched the movie, he didn’t seem particularly moved. All eyes are on his next move and what he truly wants.

Also Read: Best K-drama OSTs of 2021 That You Should Watch