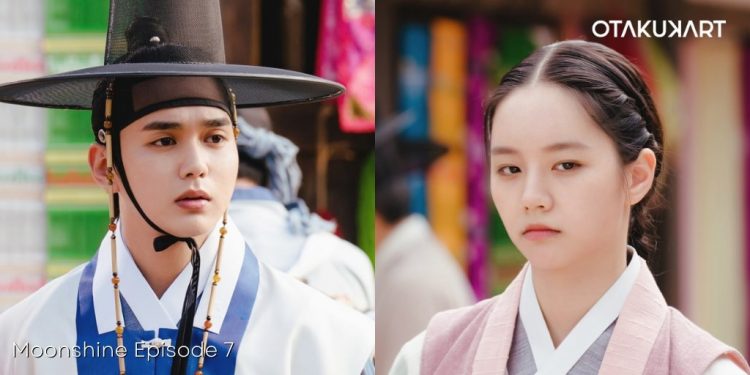 Moonshine Episode 7 is coming soon on the screens with its chaotic characters! With the marriage proposal and third party’s involvement, Yoo Seung Ho and Lee Hye Ri realized their feelings for each other. However, how will their love blossom when troubles come from all four directions? Like in the latest episode, Kang Ro Seo makes a deal with Giringak Courtesan House’s gisaeng, Woon Sim, to sell 1 Mal liquor for 20 nyang. Furthermore, Woon Sim will cancel her brother’s debt. However, problems don’t cut off here! Another surprise comes with Nam Young’s father visiting Kang Ro Seo’s humble hut and dropping a bomb of Nam Young’s marriage arrangement with Han Ae Jin.

Besides their love story, the plotline also moves forward by showing a glimpse of what happened 20 years ago. Chief State Councilor had schemed then prince Neung San by using slave Lee Shi Heum (present Chief Royal Secretary). Another trouble comes with Nam Young leaving Kang Ro Seo’s place and Kang Ro Seo being gun pointed by Merchant Sim’s mother, Dae Mo, and his twin brother, Mak San. To save Geum and her brother, Kang Ro Seo agrees with Dae Mo to sell liquor. However, unforeseen problems arise when Merchant Sim comes to Gwangju to eliminate the liquor sellers who try to sell in Hanyang.

Unexpectedly, Nam Young also arrives there to investigate a murder case and crosses paths with Merchant Sim and Dae Mo’s fight. How will Kang Ro Seo continue her alcohol selling when Nam Young doesn’t leave her side in Moonshine Episode 7?

What To Expect In Ep 7 Of When Flowers Bloom, I Think Of The Moon?

The preview of Moonshine Episode 7 is already out! The upcoming episode will bring more trouble to the main leads’ lives and their love story! It seems to save Kang Ro Seo from trouble, Lee Pyo suggests her keep in the palace. In short, he expects Kang Ro Seo to join the selection ceremony for crown princess aka Lee Pyo’s partner. However, Royal Chief Secretary has more expectations. Knowing they have come from a low-class background, he wants the crown prince to be someone from a strong political background. That way, it will be helpful for Lee Pyo’s period of ruling. Therefore, Lee Pyo will have to face his uncle as well as Nam Young and Kang Ro Seo’s strong bonding if he ever wants to win her.

Then there is the second female lead, Han Ae Jin, who has already caught on to Lee Pyo’s affection for Kang Ro Seo. Despite knowing this, she seems to determine to win her love. However, while doing so, she will cross paths with Dae Mo! Dae Mo, Mak San, and Kang Ro Seo will investigate Dae Mo’s son’s murder. It seems there is more to Merchant Sim’s story than it appears to be. The previous scene clears that Merchant Sim is related to what happened ten years ago in Mangwol Temple. Something horrible must have happened at Mangwol Temple, which the young Nam Young had witnessed and since then has been the victim of nightmares. Therefore, stay tuned to watch how this mystery of their past unfolds in Moonshine Episode 7!

Moonshine Episode 7 will be released on 10 January 2022 at 9:30 pm KST on the KBS2 channel. Now that love has bloomed in Nam Yong and Kang Ro Seo’s lives, more problems are coming towards them. Will they ever accept their feelings for each other with Nam Young’s marriage proposal and Lee Pyo’s one side crush? How will this historical love story head in the upcoming episodes? Watch every new episode of When Flowers Bloom, I Think of the Moon every Monday and Tuesday to find out who will end up with whom! Each episode runs for 70 minutes.

The Korean drama ‘When Flowers Bloom, I Think of the Moon’ broadcasts on the KBS2 network for domestic viewers. Later, the aired episodes will be available on Wavve, which is an online streaming platform open only in South Korea. In the other nations, the episode will drop on the same day at 11:30 pm in Australia, 7:30 am in the USA, 12:30 pm in the UK, and 6 pm in India. Global viewers can watch Moonshine Korean drama on online streaming websites such as Rakuten Viki and Kocowa with English Subtitles. However, note that Kocowa streaming is only accessible in South and North America.

Arifureta: From Commonplace to World’s Strongest Season 2 Episode 1: Everything To Know