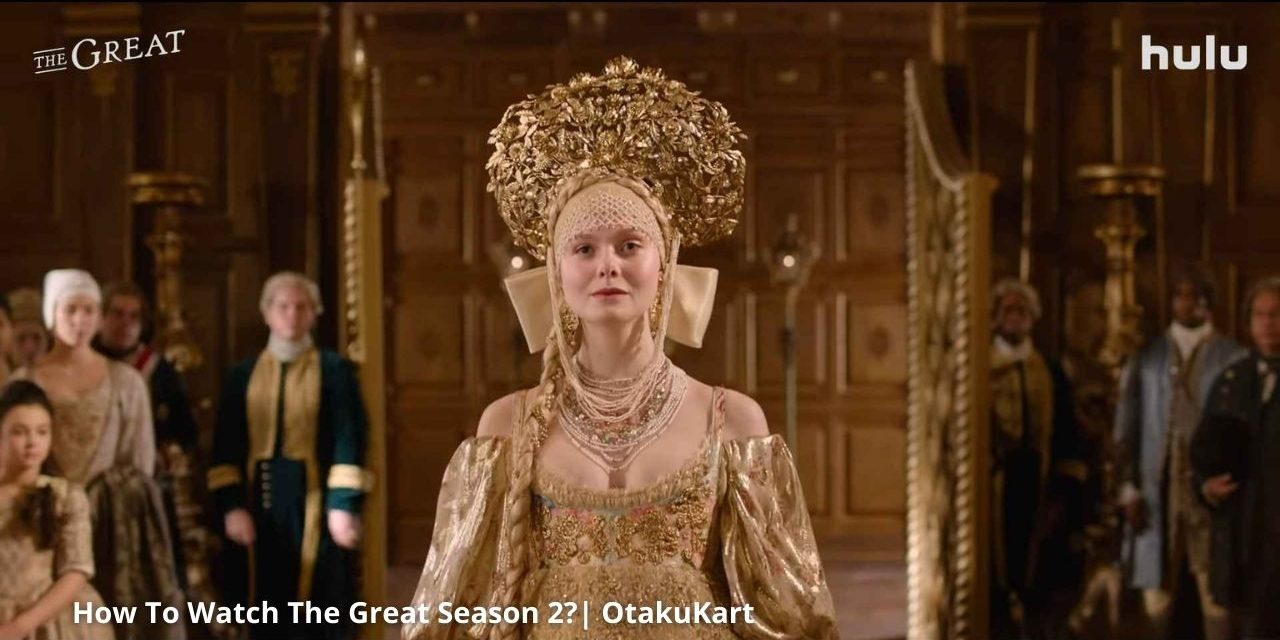 The Great Season 2 sees Catherine finally becoming what we know her for. As in “Catherine The Great” as she takes the throne of Russia. With that, unlike her husband, all she wanted was to make the country a better place. It all came at a cost. Right from losing all hope after marrying a childish Emperor to realizing how his death could make her the ruler she wants. Then to the point of fighting her husband in order to take what she wants. Now, this may have come true, but will she have what it takes to run a country that doesn’t like change? For that, you may need to watch The Great Season 2, and here is how you can.

Before we break down the entire procedure, we may need to prepare for the second season of The Great. The first season came with a lot of ups and downs for Catherine. She didn’t get the love she deserved. When she did, Peter just snatched it away from her. We all thought that she gave up her dreams for the sake of her love. But that wasn’t the case as she returned to the battlefield in no time because the country came first for her. Here is everything that went down in The Great Season 1 before we move to Season 2.

The Great told the story of Catherine The Great, who dreamed of marrying a handsome Prince and co-ruling Russia someday. Things take a different turn when she is married to Peter III of Russia. Peter is unlike the Prince she ever dreamed of. Ruling Russia doesn’t interest him a bit, and he rather spends time goofing around. There were times Catherine tried to convince him with ideas that could benefit the country to no use. All she became was someone who would give birth to the next heir to the throne.

Catherine saw her life of no use until she realized Emperor dying in Russia meant Emperess could take over. This resulted in her plotting a plan to kill Peter III of Russia. In the process, she also finds many friends who are seeking revenge from Peter and joins her in the quest while she also continues to improve the conditions in Russia. The plan backfires when she starts realizing during all this time, Peter started falling in love with her. On top of that, he finds out the man that he gifted her. As in, Leo actually started having an affair with her, and they loved each other. This results in Peter hunting Leo down to imprison him.

Catherine and Peter’s army wages war, and they both come to kill each other. But Catherine being pregnant cools things for both of them. Peter is happy to have an heir and Catherine too. So she had an offer. Peter can raise the baby with her, but she wants to rule Russia too while he, on the other hand, if wants could party all his life. Peter still declines the offer and asks Catherine to tell her army to back off, or Leo dies. Catherine decides to save Leo but soon bids him adieu because taking care of Russia is her first priority. More important than her love. So the season closes with her returning to battle Peter’s army.

Apart from all of this, we also saw side plots such as Peter and his best friend Grigor’s tiff. Grigor believed Peter was having an affair with his wife and plotted against him. But later, they came to reconciliation with Peter promising to end it. So Grigor was one of the few who didn’t join Catherine.

The Great Season 2 – What Is It About?

The official synopsis of The Great Synopsis suggests that Catherine will take over the throne of Russia. Well, taking down her husband was quite difficult for her. But if this is what she calls difficult, then she is not even ready for what’s about to come. Running the country isn’t easy, and she will realize the same when she comes across the reality of Russia. A country that doesn’t want to be liberated in any manner.

So, in order to fulfill her dreams of ruling the country peacefully, she may have to go to lengths. Even to the point where she will battle not only the enemies in the court but also her own friends, her own team, and her own mother. Amidst all of this, she has her own personal things to take care of. Having Peter as a prisoner results in a change of heart for him. Fanning has teased that Catherine may start having a soft corner for him. But can Catherine really trust him to be a new friend?

From The Official Trailer Of Great Season 2 Featuring Elle Fanning

Coming to a conclusion, The Great Season 2 will have Catherine realize that she should let the country change her before she changes it. Apart from all of this, Elle Fanning, who plays the role of Catherine, hinted that the show would also be more about her becoming a mother. We already know from the pictures online which sees Catherine is pregnant. So we may see her taking care of herself as well apart from the country as she grows and learns what it means to be a mother. Also, let’s not forget she is battling her own mother, so there is a lot to learn here and there.

Apart from that, the trailer of The Great Season 2 gave us further insights into the show. We saw Catherine helming the crown while also picking up her name “Catherine The Great”. Then, we see that Catherine plans to run Russia without bloodshed, and Peter certainly doesn’t believe that’s possible in any manner.

Also, we actually do see Peter attempting to make Catherine fall for him to protect the bloodline. But Catherine doesn’t seem to show any interest in that particular matter. Peter even opts to change himself, as we mentioned above. This may, in turn, sparks some sort of interest between the two. Lastly, the only other person we are looking out for is Catherine’s mother, Johanna, who came to town after hearing what her daughter has achieved. Check out the official trailer for The Great Season 2 below.

The Great Season 2 brings back most of the original cast from season 1. Starting off, we have the cue for Elle Fanning returning as s Catherine the Great. Joining her is Nicholas Hoult as Peter III of Russia. We are also expecting to see returning characters such as Phoebe Fox as Marial, Sacha Dhawan as Count Orlo, Charity Wakefield as Georgina Dymova, Gwilym Lee as Grigor Dymov, Adam Godley as, Archbishop “Archie”, Douglas Hodge as General Velementov, and Belinda Bromilow as Aunt Elizabeth.

Talking about new faces joining the team, we have Gillian Anderson as Catherine’s mother, Johanna. Apart from that, we are not expecting some faces such as Sebastian de Souza as Leo Voronsky to return as his character bid Catherine adieu in the first season. She chose country over her love, so pursuing a relationship with him was out of the question.

How To Watch The Great Season 2?

Also Read: The Best Shows On Hulu That You Can Stream Right Now!