Letterkenny Season 10 is right around the corner and here is you can watch it online from your comfort. 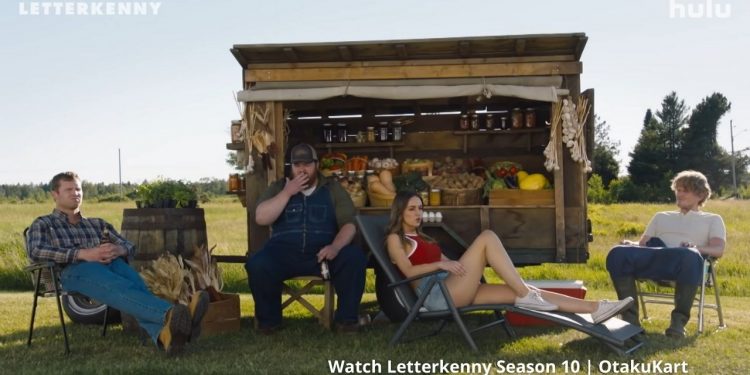 From The Official Trailer Of Letterkenny Season 10

Starting off as YouTube series, Letterkenny has come far ahead in its game that had the audience waiting for Season 10. Now it’s making its way, starting in Canada and United States. A new season, a bunch of new storylines, and new adventures are right ahead for the community of Letterkenny. Created by Jared Keeso, with Keeso and Jacob Tierney on writing, here is we are taking a look at how you can watch the latest season 10 of Letterkenny.

Before we move to the same, we will take a quick look at what this new season is all about. Then we will move to the original release that will happen in Canadian, with it being a Canadian show. We will list down the OTTs that may offer Letterkenny Season 10 and the different plans it will serve. Then move to other countries and look at what OTTs offer Letterkenny Season 10 there with their own different plans and price ranges.

Letterkenny Season 10 Plot: What Is This Season About?

Letterkenny Season 10 comes packed with ten strong episodes, each carrying a plot of its own. After all, that’s what sitcoms are all about. The first episode this season sees the characters on storytime and planning to launch a new drink. There is something called a Caesar building contest in the town. The Hicks will also be attending a sausage party while there is a video game competition taking place between hockey players and skids.

Video games won’t be the place where the competition stops. The fifth coming episode once again sees the hockey players and kids competing for VidVok fame. If that wasn’t enough, we see the trailer featuring a fight with Derricks and then Katy’s plan to spread a rumor that gets the entire small town talking. Check out the official trailer for Letterkenny Season 10 below.

How To Watch Letterkenny Season 10 In Canada?

Letterkenny is a Canadian show and a Crave Original. Therefore, the only way to watch Season 10 of Letterkenny in Canada is Crave. So, the first thing you need is a Crave account. Then, one of the two different plans of the platform comes in monthly as well as Annual form. Both of them offer Letterkenny Season 10. First of all, is the Crave Total plan coming for around $19.99/mo + tax and $199.90/yr + tax. It not only offers Letterkenny Season 10 but also the entire Crave content library, allowance on all devices, highest resolutions, casting, four screens, and five registered devices.

Now, coming to Crave Mobile plan that comes for around $9.99/mo + tax and $99.90/yr + tax. Crave Mobile plan also offers Letterkenny Season 10 only with certain limitations. That won’t be a problem if you are constantly streaming on your phone. The mobile plan only offers the entire Crave library, good resolution of around 480-720p, and is limited to mobile app or web in mobile-only.

Also Read: How To Watch The Witcher Season 2 Online?

Apart from Canada and United States, Letterkenny Season 10 isn’t available internationally in any of the other countries. Once available through any other streaming service, we will notify you. For example, in India, Disney+ Hotstar has welcomed some popular Hulu shows and movies like Only Murders In The Building and Vacation Friends.

Also Read: It’s Always Sunny In Philadelphia Season 16: When Can We Expect The Gang To Return?