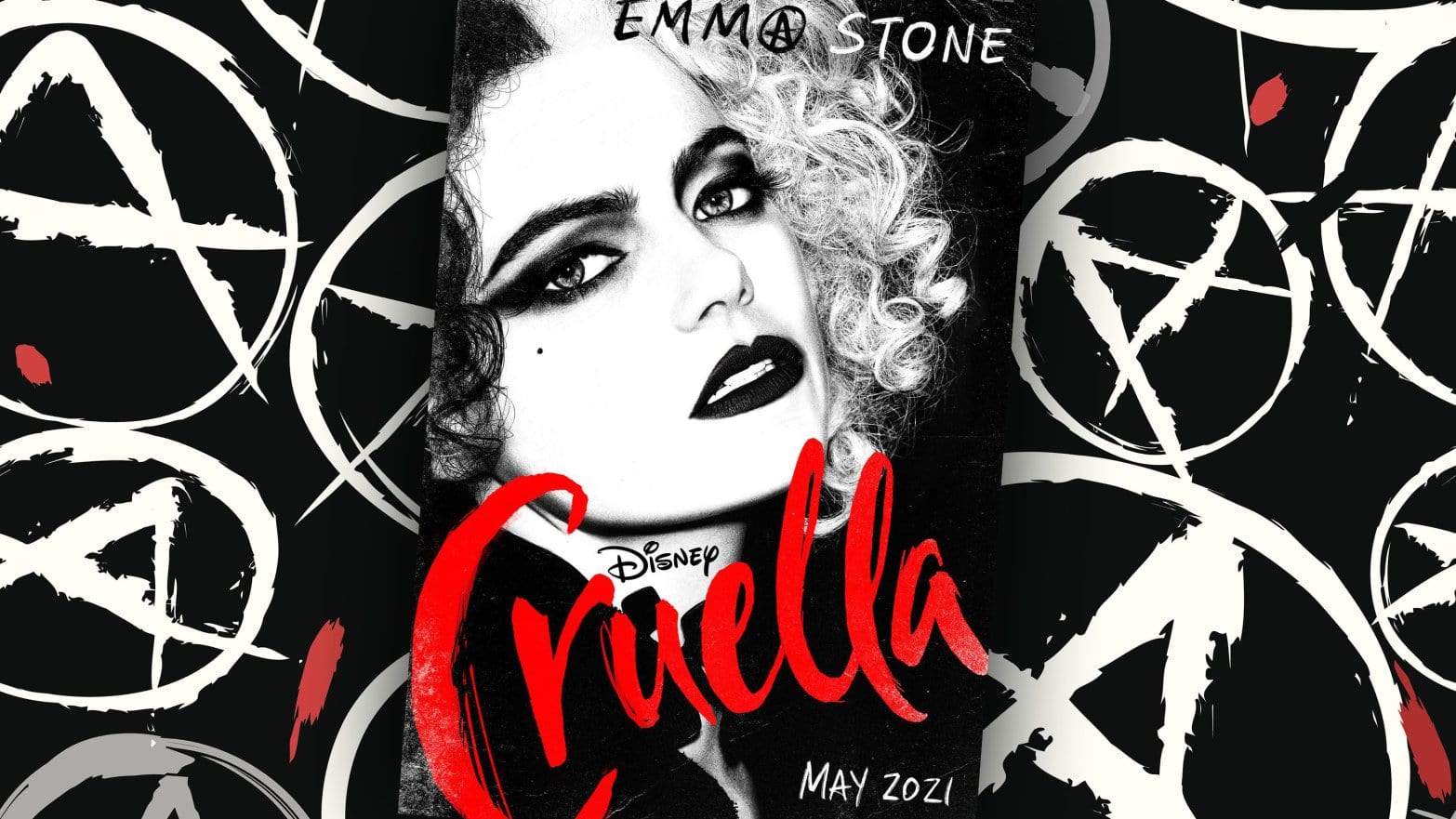 The 2021 Crime Comedy film, Cruella, based on the villainess of the novel from 1956 named The Hundred One Dalmatians. The novel was also adapted into a Walt Disney movie in 1961. Cruella is directed by Gillespie. Tony McNamara and Dana Fox handled the screenplay, and the story was written by Aline McKenna, Kelly Marcel, and Steve Zissis. The film is the 3rd movie in the 101 Dalmations Franchise and basically a prequel. Emma Stone plays Cruella de Vil. The film is set in 1970s London, with Punk Rock Movement in full go. Estella Mill is the protagonist, an up-and-coming fashion designer. This is the tale of how she became the notorious but famous designer, Cruella de Vil. The movie is served to show what was the catalyst that turned Estella into Cruella.

The film was announced back in 2013 by Disney. Emma Stone was chosen for the role 3 years later. Glenn Close, the original Cruella de Vil in the live-action movies of 101 Dalmations and 102 Dalmations (1996, 2000), and Emma Stone are executive producers. The shooting occurred in England between August to November 2019. The movie premiered in Los Angeles on 18th May 2021. It was the first red carpet movie release ever since the Corona Pandemic. The film was praised for its direction, acting, costumes but criticized for its screenplay. Watch the trailer below, and the second trailer here.

A creative and talented child, Estella Miller, played by Emma Stone has a real knack for fashion. Unfortunately, she also has a knack for being cold and cruel, which leads to her own mother naming her Cruella. She is rebellious and troubling, which makes her mother (Emily Beecham) pull her out of school, and off they go to London. On the way, they stop by a party held by the Baroness von Hellman played by Emma Thompson to ask for help in financial matters. Unfortunately, her mother is killed by being pushed off from a cliff by the Baroness’s dangerous and ferocious Dalmations. Now an orphan, she continues to go to London and meets Jasper (Joel Fry) and Horace (Paul Walter Hauser) and dyes her hair red. After 10 years, she lands a job with the Baroness and gains her confidence. 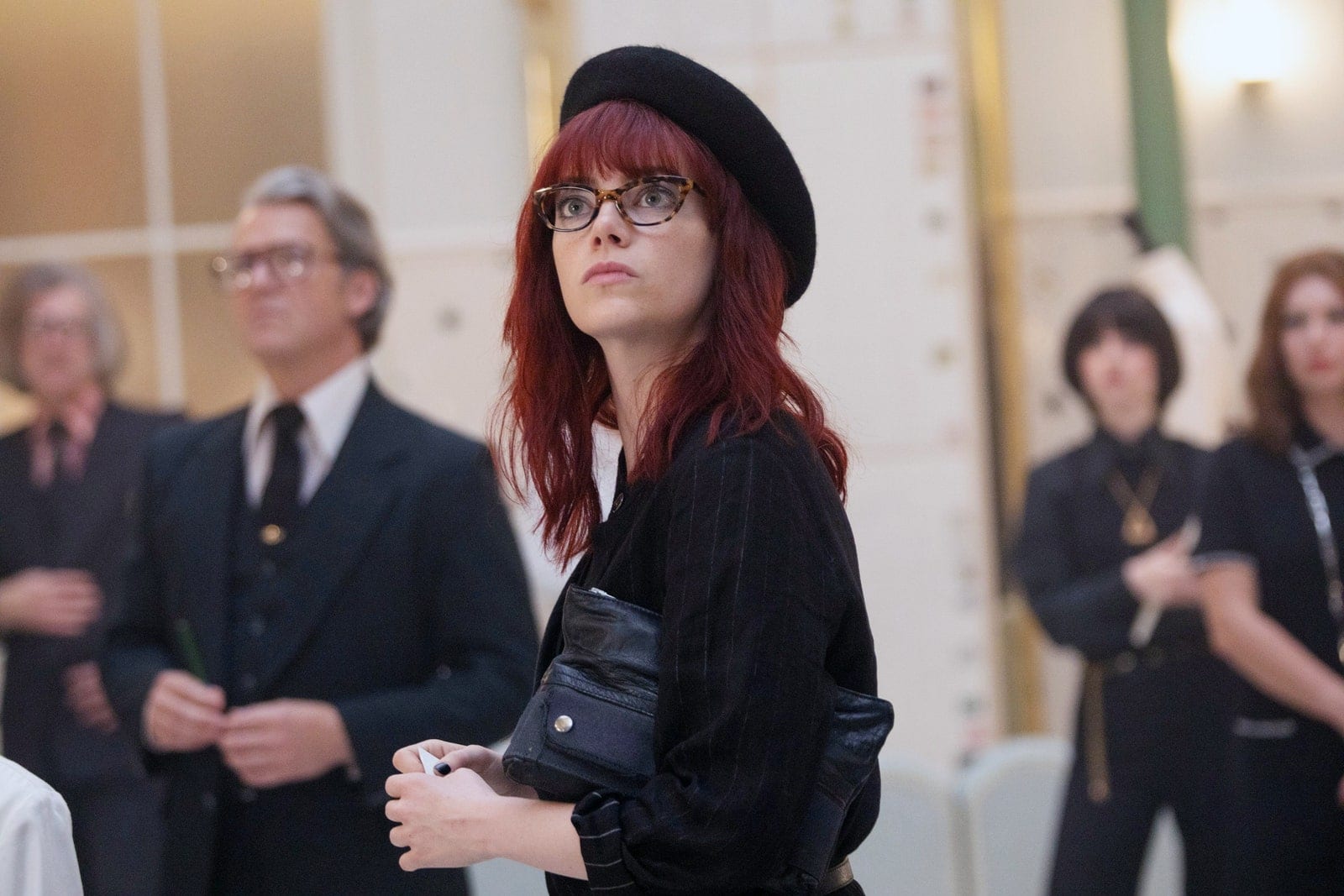 Estella: Before She Was Cruel (Credits: Disney)

Also Read: Top 10 Movies Like Cruella That You Must See

When she becomes really close to her, she notices that the Baroness has a necklace that once belonged to her mother. She with Jasper and Horace decides to steal it. Estella then wears her natural hair color and shows up at her party uninvited to steal her mother’s necklace. She keeps taunting her by upstaging her and gaining publicity. After one of the Dalmatians accidentally eats the necklace, she proceeds to kidnap all her dogs. She stages her fashion shows. When the Baroness finds out that Estella and Cruella are one and the same, she has leaves her to die in a fire. Just when Cruella was about to die, the valet, John (Mark Strong)  shows up. He tells her that the Baroness is her actual mother. 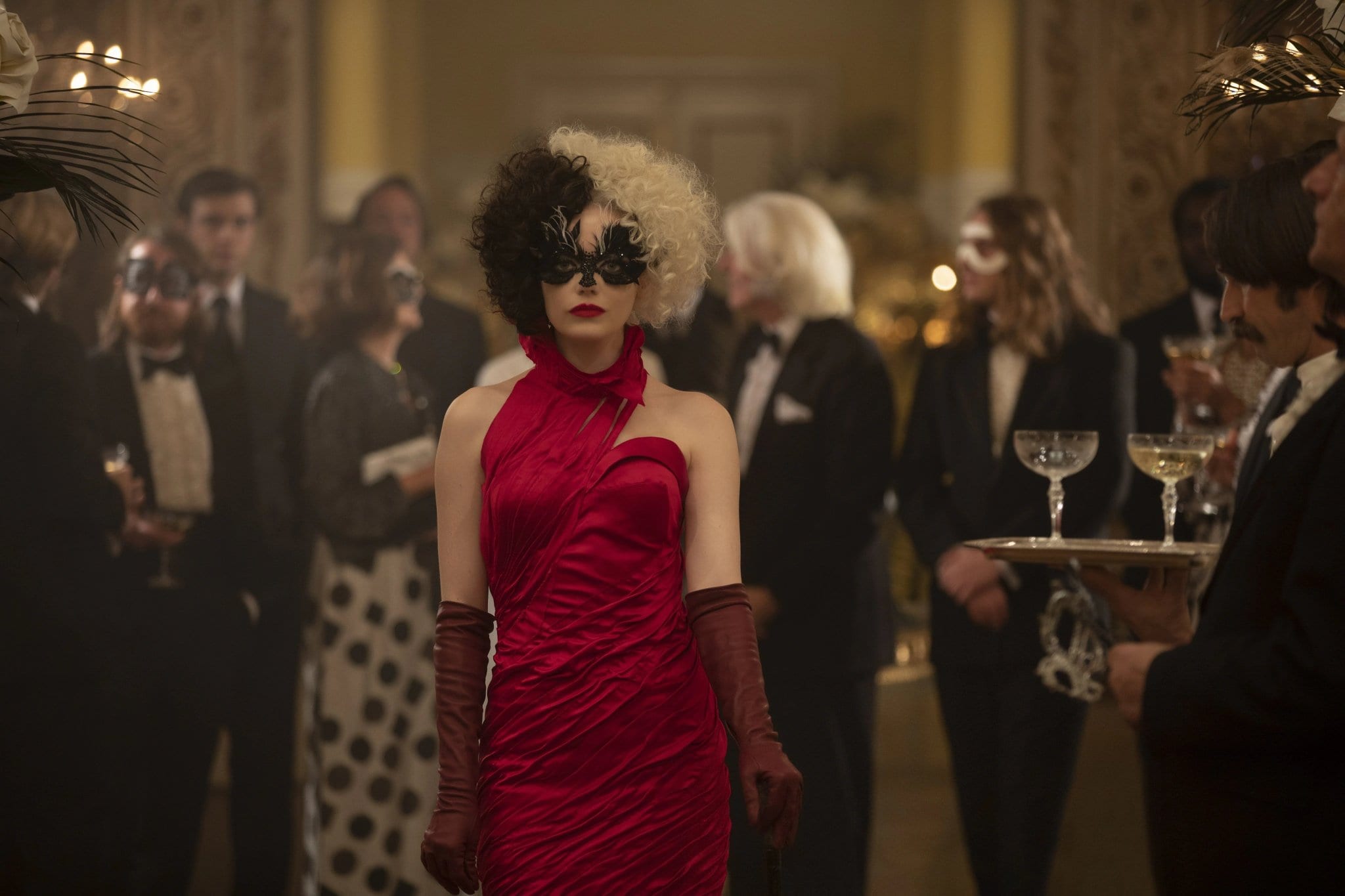 Estella as Cruella in one of the Baroness’s Party (Credits: Disney)

Apparently, to focus on her career, the Baroness wanted baby Estella dead. Instead, Estella’s mother kidnapped her and raised her in secret. She is angered but not for long. In order to get her revenge, she adopts the name Cruella permanently. She helps her friends escape the prison. After that she crashes Baroness’s charity gala, dressed as Estella and reveals how she abandoned her own daughter. The Baroness deceives her and then tries to push her off the cliff – which everyone witnesses. Estella/Cruella saves herself because of her dress having an in-built parachute. She thus becomes the heir of all her fortune, obtains the last name “De Vil” and receives Hellman Hall, renaming it Hell Hall. 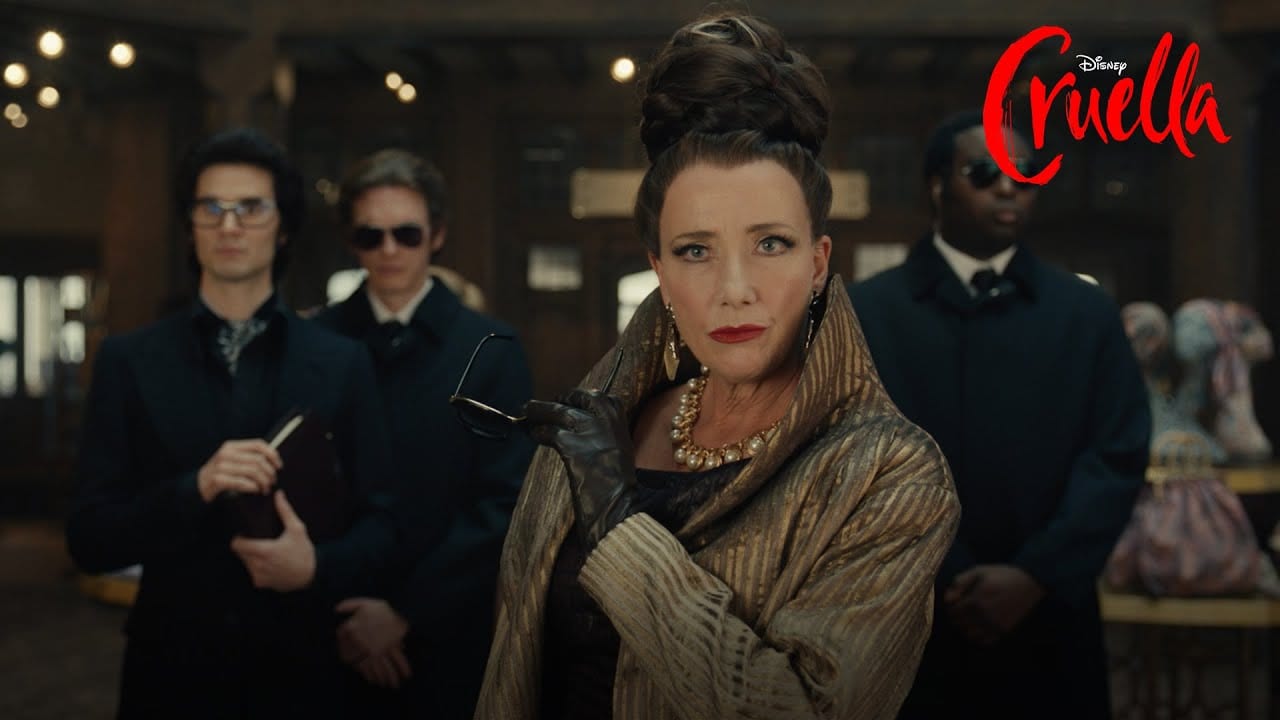 Later, after the end of the movie, Cruella delivers two Dalmation Puppies, the children of the Baroness’ Dalmatians to her friend Anita (Kirby Howell-Baptiste) – who had helped her in gaining publicity – and Roger, her husband. Roger (Kayvan Novak) thus begins to write the song “Cruella de Vil.” The puppies are apparently named Pongo and Perdita. 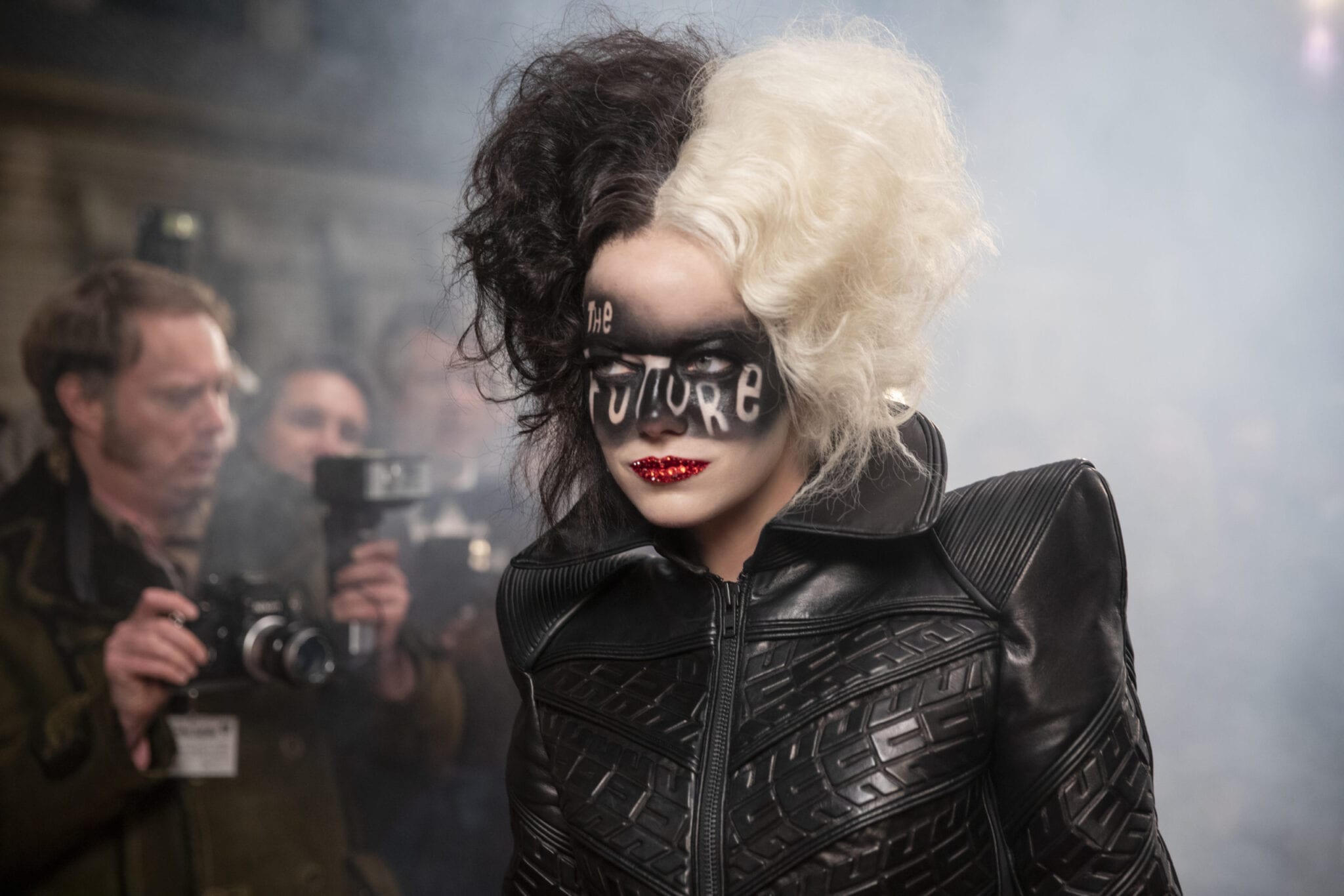 Cruella: Where to Watch?

Fans can see Cruella in cinema theatres worldwide. Cruella is the first Disney film to be released theatrically since the start of the Corona Pandemic. But of course, fans can also watch the movie from the comfort of their couch, or bed. Cruella is available on Disney+. Some people can also have premier access for an additional cost. However, it is not available on Netflix, Amazon Prime, HBO Max, or Hulu. For now, it is only available on Disney+ Premier Access. 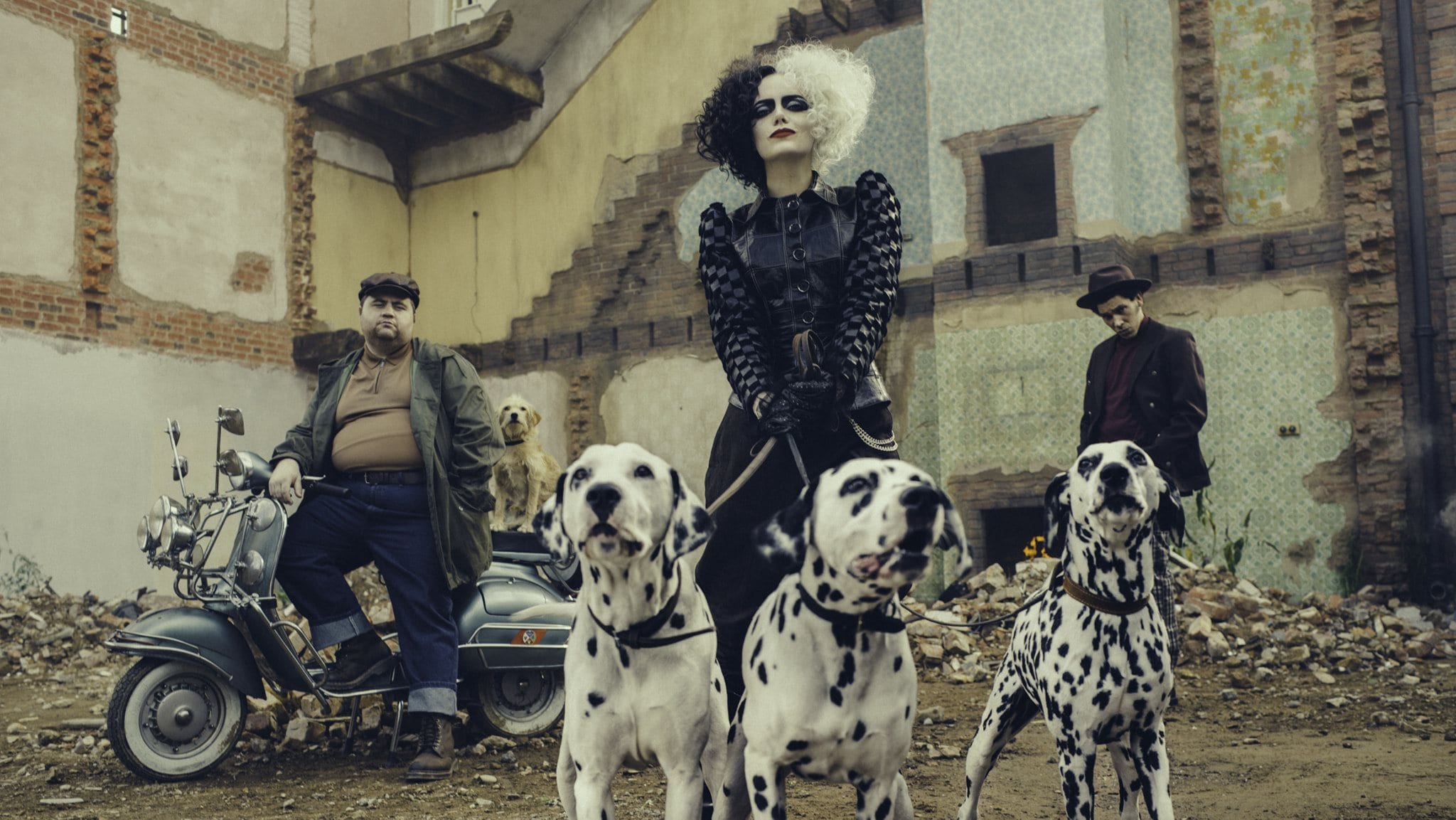 Cruella with Jasper, Horace, and the Baroness’s Dalmatians (Credits: Disney)

In order to watch Cruella, you will need to purchase it (if you already have a Disney+ subscription) for $29.99. However, many people think they would rather wait until it is available on a standard Disney+ subscription (Which costs around 7USD/month), which would not happen until August 2021.