Recently, BTS Jungkook responded to an ARMY’s marriage proposal to Suga! Interestingly, his response has caught fans’ attention. After all, who doesn’t love to tease their little meow meow (Min Yoon Gi)? His witty reply had fans rolling on the floor while cooing over him. Even though Min Yoon Gi may appear rough and cold for newcomers, he is one of the sweetest souls anyone could wish for. It is something many ARMYs have come to know and don’t hesitate to show their love for him. They are even ready to use the other members to deliver their undying love for Suga. Thus, this time, they choose BTS maknae Jungkook!

The world-famous kpop group ‘BTS‘ has stolen millions of hearts with their beautiful and soulful melodies and meaningful lyrics! Coming from the bottom, from a not-so-famous entertainment agency without much financial backup, BTS has paved their way. They have become an icon of hard work and love yourself, bringing everyone from each corner of the world together. No wonder all ARMYs are head over heel for them, and from time to time, fans express their love by proposing to the members. Therefore, this time, surprisingly, BTS Jungkook is chosen to deliver an ARMY’s marriage proposal to Suga!

How Does BTS Jungkook Respond To ARMY’s Marriage Proposal To Suga?

On 19 March 2022, BTS maknae Jungkook held a casual Q&A via Instagram Stories. Knowing he has 35 million+ Instagram followers, the answer box must be filled with millions of replies. The Q&A continued for almost more than an hour. Jungkook had replied to 60+ answers which is a considerable large number. However, some replies had caught fans’ attention, especially the one directed for BTS Suga! It was nothing new but another marriage proposal from an ARMY to Suga. It seems ‘Suga Marriage Proposal Saga’ will continue even in the future! 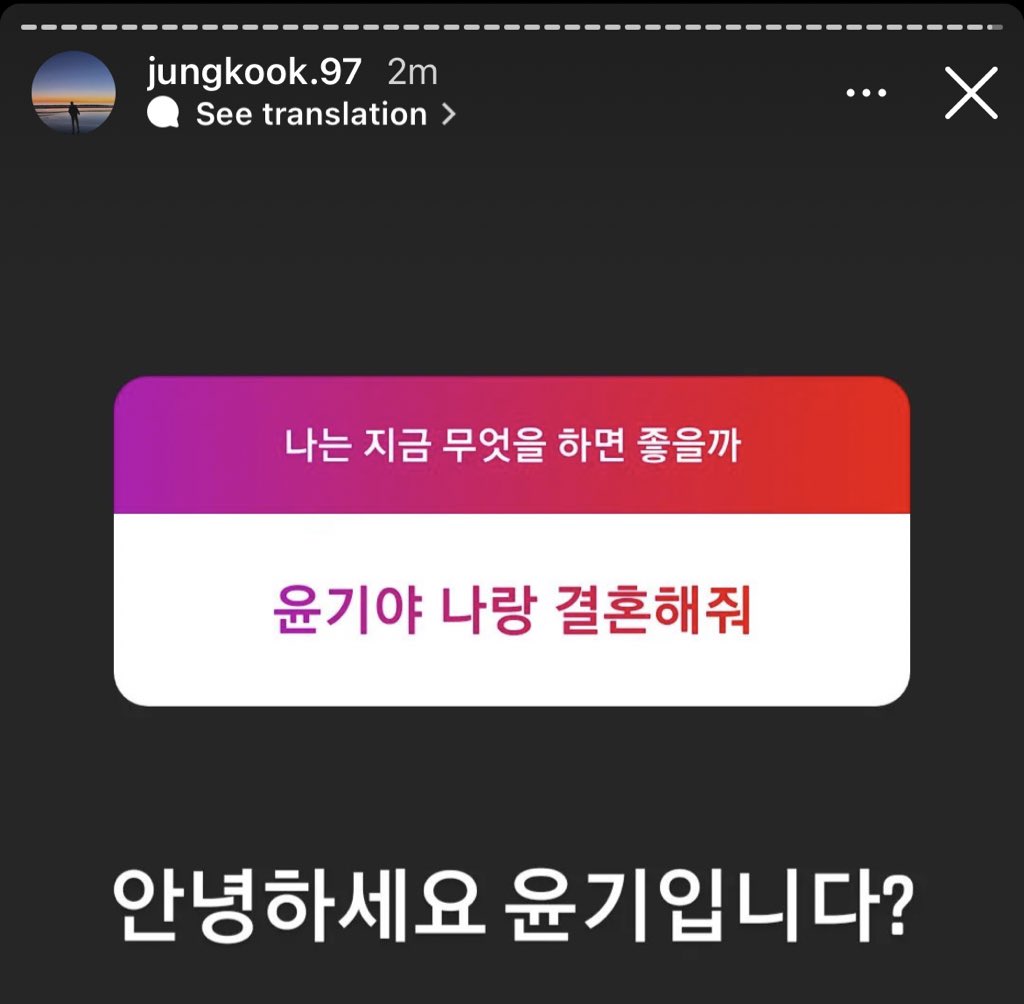 In Jungkook’s Q&A session, he asked ‘What Should I Do Right Now?’ in the question part. However, one ARMY replied that ‘Yoongi-yah, please marry me.’ Although the reply was not related to the question, still Jungkook tried to entertain the thought and gave a witty reply- ‘Hello, I’m Yoong?’ It was an adorable response from our bunny.

Jungkook’s teasing the ARMY by asking if he turned into Min Yoon Gi since he was receiving Suga’s marriage proposal. After all, When ‘Suga Marriage Proposal Saga’ started, no members were left from this hilarious teasing. Although it is mainly aimed at Suga, the other members also don’t back off when it comes to teasing their adorable hyung. However, Jungkook is not the first to start this legendary saga, but rather BTS’s second maknae V, Kim Taehyung!

The original creator of the ‘Suga Marriage Proposal Saga’ is BTS V. It is no surprise that whenever the group holds live broadcasting, Kim Taehyung uses that chance to express his and ARMY’s love for Min Yoon Gi by reading his marriage proposal comments. The most memorable happened in December 2021’s Vlive, where he expressed an ARMY’s proposing comment, bringing laughter to the other members. Furthermore, during the latest OT4 (Jin, Jungkook, J-Hope & V) Vlive, V read Suga’s marriage proposal. It was another laughable but adorable tale since Suga wasn’t even present, making the situation more hilarious! Therefore, many fans hope this ‘Suga Marriage Proposal Saga’ never ends!

With the release of BTS’s original webtoon and web novel ‘7 FATES: CHAKHO,’ Jungkook and Suga have been the center of attention. The newly released OST ‘Stay Alive’ by Jungkook and Suga has been on the UK’s single charts. After ‘Stay Alive’ and ‘PTD on Stage- Seoul,’ the boys seem to work on their upcoming concert ‘PTD on Stage- Las Vegas.’ Besides Jungkook and Suga, the other members are also working on their solo work, such as Park Jimin’s first kdrama OST, Hope World 2, and KTH1. Even RM seems to be working on his mixtape. Therefore, this year, fans should get ready for more surprises from BTS!

Also Read: BTS’s Jungkook Talks About The No-Cheering Rule And How It Affected Him While Performing