How did the Queen of Curses, Rika, survive even after getting dispelled in Jujutsu Kaisen 0? Is she a Shikigami now? 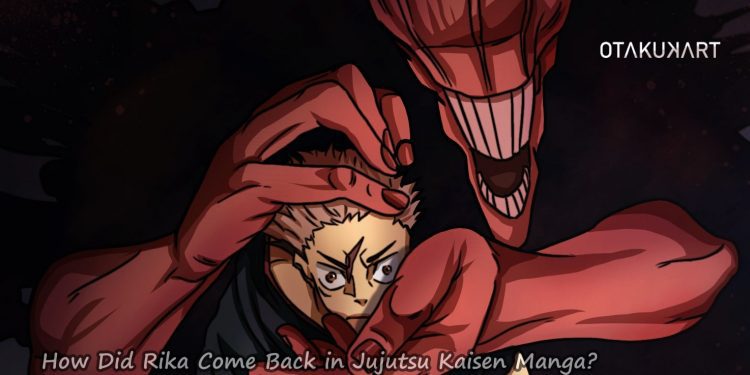 Jujutsu Kaisen 0 ended with Rika and Yuta parting their way to their different journeys of life and afterlife, respectively. In his battle against Suguru Geto, Yuta unknowingly dispels Rika’s curse and frees her from the contract that enslaved her. Before bidding farewell to the love of her life, she admits that the six years she spent with Yuta were the happiest days of her life.

Now, does that mean that Rika’s occultly love story has finally found a full stop? No, Chapter 141 of Jujutsu Kaisen manga brought the Queen of Curses back to the canon storyline. Not only is Rika on her peak stage, but she also is far more obedient towards Yuta. How did Yuta defy all the rules of nature and rescue Rika from the loneliness of the afterlife? Here we have brought together all the theories around Rika’s comeback.

Who is Rika Orimoto?

Rika Orimoto was the girl whom Yuta was irreparably in love with. She gave Yuta a ring on his birthday, promising to marry each other when they grow up. However, life had other plans for them. She died in a tragic traffic accident, leaving Yuta alone. Struck with immense grief, Yuta cursed Rika forming a contract that ties them together.

Rika manifested into the most dangerous special-grade curse anyone has ever seen and kept protecting Yuta against his wish. For example, she stuffed the classmates of Yuta who were bullying him. He even attempted suicide, but the cursed spirit didn’t let him die in peace. The matter caught Sotoru Gojo’s attention, and he got Yuta enrolled in Jujutsu High with the sole intention of controlling Rika’s powers.

Did Rika Come Back?

Yes, Rika aided Yuta when he was having a hard time-fighting Itadori. She appeared out of nowhere and held Itadori by his hands so that Yuta could stab through his heart. Don’t get scared; Itadori didn’t actually die in the encounter. It was all an act to fool the Jujutsu Higher-ups, and he healed Itadori’s heart with his Reversed Curse Technique. This fake fight confirmed that the special-grade sorcerer still has the Queen of Curses by his side. Here we have brought all the possible theories that could have revived the curse.

Rika Stayed with Yuta of Her Free Will

There’s a high possibility that Rika could have stayed back with Yuta despite being freed from the binding contract. It’s no secret that she loves Yuta way too much, and she can sacrifice her eternal sleep just to be with Yuta a bit longer. The only flaw with this theory is, only a vengeful spirit can become a cursed spirit, and Rika isn’t one. Maybe the urge to meet Yuta badly gave rise to enough negative emotions that reincarnated her monstrous form.

Rika’s Death Was an Act

Time and time again, Gojo had to fake the deaths of his beloved student to keep them safe from the Jujutsu Higher-ups. Yuta and Rika are a duo that the higher-ups wanted dead at any cost. Gojo knew that the existence of Rika affects the balance of the jujutsu world, and evil sorcerers like Geto will keep coming to get their hands on her. So, the best way out was to pull off an act that confirmed Rika getting dispelled.

Yuta made a Copy of Rika

In the Jujutsu Kaisen 0 prequel, we saw that Yuta is the ‘copy-sorcerer’ of Jujutsu Kaisen. He can copy anyone’s cursed technique and make it his own within seconds. He even imitated Inumaki’s Cursed Voice technique, which is extremely complicated and hard to learn. Yuta could have created a copy of Rika from his memory just because he was used to fighting alongside her. This may sound crazy, but it is indeed possible since Rika was originally created from Yuta’s cursed energy, so giving rise to another cursed spirit shouldn’t be a surprise.

The New Rika is a Shikigami

Just like the Naruto series’ summoning beasts, Jujutsu Kaisen has Shikigamis to aid the sorcerers. Since Yuta can copy any technique just by seeing it, the Shikigami technique shouldn’t be any exception. There’s a high possibility that Yuta has turned Rika into his Shikigami so that he can keep harnessing her powers without getting caught. Now, Shikigami users need a talisman to summon the cursed spirit. In that case, Yuta’s wedding ring will be a fitting talisman.

Yuta has this special ability to heal anyone’s injury or bring back someone from the brink of death with his Reversed Curse technique. What if this technique isn’t limited to humans only? There’s a slim possibility that Yuta must have used the same technique to retrieve Rika from the afterlife. I am sure she would have been more than happy to get back to her childhood friend.