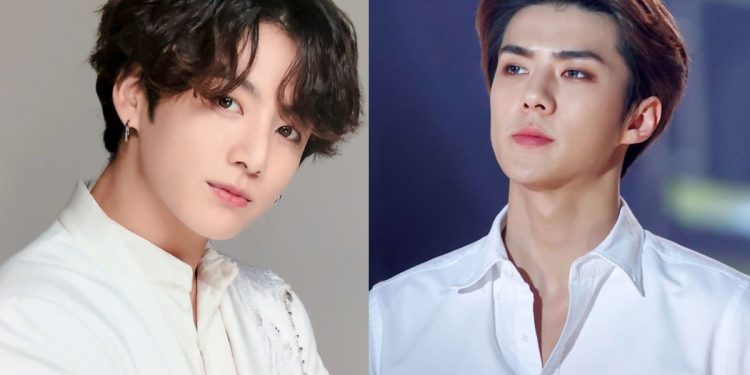 Trends change with time, and recently the old beauty and fashion trends have been changing in the k-pop industry. Ditching the conventional standards, many idols have been standing up and owning their natural looks. And with that, science has found another way to break into the standards. The ‘Divine Proportion’ or the ‘Golden Ratio of the face’, the measurements of an ideal face, have been making rounds on the internet. So, here we are to list down some of the Male L-pop idols with the Golden Ratio. The measurements are based on the symmetry of the face and are denoted by the “Fibonacci numbers,” i.e., the never-ending sequence of ‘0’ and ‘1’.

As explained by the plastic surgeons, the perfect facial ratio used to be 1:1:1, but with time it has changed. Now the most appealing ratio is 1:1:0.8 as it gives the person a sharper and younger look. The distance of forehead to eyebrows, eyebrows to nose tip, and nose tip to chin come under the major consideration in the ratio. As we know that many k-pop idols are genetically blessed with natural looks, a lot of them have made the cut under the list of people having the golden ratio.

Enlisting in the military last year, Jinwoo was finally discharged on December 31, 2021. Kim Jin Woo made his debut in 2013 under YG Entertainment with the boy group ‘Winner’. Jinwoo is known to have a face with the golden ratio. Under a survey conducted by MNET, some renowned surgeons participated and named Jinwoo in the second place. They revealed that Jinwoo’s face fits perfectly with the current golden ratio.

During his pre-debut and survival show ‘Mnet’s WIN: Who Is Next?’ days, Jinwoo used to have chubby cheeks and longer hair. But with the extensive training and diet, he was put through along with puberty, his double eyelids and nose got more defined. And with white and perfectly placed teeth, a high nose bridge, and extremely good skin, he made his debut and has been rocking his visuals ever since.

As a part of EXO, Sehun has been active in the industry for over a decade now. And now the idol has been exploring his acting side too. Just as ‘Now We’re Breaking Up’ has finally ended, Sehun will be taking over the screens with ‘The Pirates’ sequel. But his shows and music are not the only ones Sehun stays in the news for. As tested by the netizens themselves, Sehun has one of the symmetrical faces in the k-pop industry. Deciding to split a picture of Sehun, the netizen saw that the halves were so identical. And the only difference in the picture was the expression. While one side was friendly, the other side looked cold.

Making his debut with the infamous boy group ‘SHINee,’ Minho is known as the king of k-pop along with his band members. Currently focusing on his acting career, Minho is one of the k-pop idols who have one of the perfect faces in the k-pop industry. According to the experts in dermatology and surgery, Choi Minho has dark eyebrows, big eyes and long lashes, a moderately tall male nose, plump lips, and a masculine jawline. Making the idol has an overall consistent face and the measurements of the golden ratio. From the 2018 Fashion Week Givenchy Show In Paris to the Hanstar Celebrity Basketball Event, Minho has been able to steal the show effortlessly with his perfect natural looks.

Also Read: Where Are SHINee Now? Everything To Know About ‘The Kings of K-pop’

Making his debut with boy group SF9, Rowoon is also working in some acting gigs, and he’s been acing that. Along with having above-average height, Rowoon’s model-like features make him stand out more than the other idols. Having a perfectly symmetrical face, just-right proportions, and intense yet charming expression, Rowoon makes it to the list. The idol’s sophisticated looks and gentle aura are enough to light up the neutral settings and to steal the hearts of fans all over the world.

Hwang Hyunjin made his debut as the main dancer, lead rapper, sub-vocalist of Stray Kids. But the idol has been continuously serving as the visuals of the group. He’s been known to be the vias wrecker of many fans in the fandom, and we can’t really blame them. Considered as the ethereal beauty by many of his fans, it is hard to ignore Hyunjin’s proportions. Having one of the most symmetrical faces in the k-pop industry, Hyunjin’s face is very close to Golden Ratio. The pictures from his childhood just prove that the idol has always had flawless skin and an effortless look.

Idol and actor Cha Eun Woo has always been in the news for his good looks. There’s no doubt that the idol looks like he came out straight out of a webtoon. Looking at the pictures from Eun Woo’s childhood, we can see that the actor is just born perfect. Dr. Charles S. Lee from the American Board of Plastic Surgery also stepped in to confirm the fact. In one of his videos on TikTok, the doctor put emphasis on the symmetry of Cha Eun Woo’s face. As the actor has both the ‘horizontal thirds’ and ‘vertical fifths’. Along with the distance between his nose, lips, and chin. And thanks to the looks, the actor has made it to 2nd place in the worldwide 100 handsome faces.

Making his debut under SM Entertainment, Taeyong is a part of the renowned boy group NCT. Along with being known as the rapper, singer, dancer, and songwriter, Taeyong’s visuals are something else. Having a diamond-shaped face with high cheekbones and the sharpest jawline, Taeyong’s face seems unreal sometimes. Having thick eyebrows and double lid deep-set eyes makes him stand out more than the other idols. He even fits the Korean beauty standards of having a small nose and a pretty smile. With his charms and flawless features, Taeyong is known to have a duality while performing. As according to fans, the idol can go from charming to breathtaking in a matter of minutes.

Talking about the golden proportions, who can forget the worldwide handsome Mr. Kim Seok Jin? The oldest member of BTS is always serving visuals. Having the most symmetrical face, Jin even won the best-sculpted face award, and he has owned the title ever since. Last year, one of the renowned Plastic surgeons, Kim Jin Seong, analyzed the face structures of all the BTS members and concluded that scientifically, Jin has the perfect face.

Talking about how proportional and balanced Jin’s face structure is and that he has long eyes and nice eyelids. Along with a high nose bridge and a natural nose shape. Jin’s visuals have been recognized all over the world as people not knowing his name have been pointing to him. Till now, Jin has gained many names after his public appearances, especially ‘The car door guy’ and ‘The third one from the left’.

The charms of BTS’s Kim Tae Hyung are undeniable. Known as the world’s most handsome face V fits all the criteria for the golden ratio. As analyzed by a Brazilian plastic surgeon, V has a beautiful face that defies Korean standards.

Having a very symmetrical face, V’s face is very pleasing to the eye. With very sharp features and a perfectly proportioned body, V is known to be able to adapt to different looks and absolutely rock them.

Also Read: BTS V Has Made Yet Another World Record!