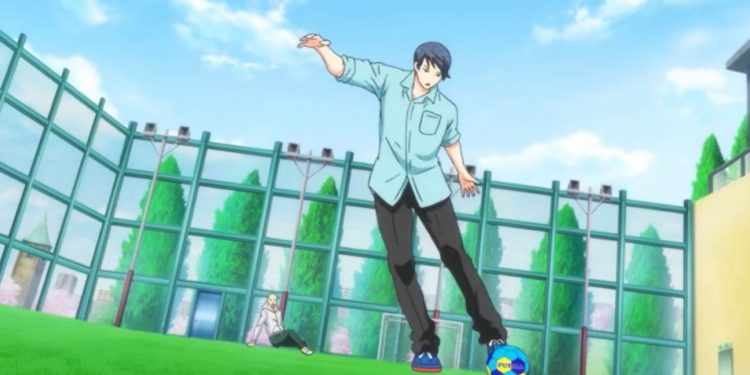 Brazil vs. Japan begins, and the Japanese begin to dominate the Brazilians using counterattacks after every corner kick or goal kick. The Japanese know that the Brazalians’ right-wing was exposed and use that to their advantage. Japan’s futsal star player dribbles the three Brazilians and passes them and passes to number 7, who return it from the above. The Star player jumps and uses an overhead kick called Storm of Horizon and scores a screamer. Brazil’s goalkeeper only hears the sound of the net. Haru notices that Tennoji uses his super move to score a fantastic goal.

Tennoji receives a standing ovation from the whole stadium, including the Brazil fans. Haru’s fan told Haru that he had been a fan of Tennoji ever since childhood. Haru was impressed by Tennoji’s skills and style of play and realized that he could try futsal. Haru’s friend convinces Haru to join futsal, and he will one day become Japan’s futsal star player. Haru realizes that he has something that he needs to achieve, and his favorite position is number 7. Japan spectacularly won the world cup, and Tennoji became famous. His overhead kick goal stayed in history for centuries.

Haru arrives and meets with Tennijo for the first time, and he falls since he was riding a bicycle towards the stairs. Haru realizes that his bike tire came off and worries that he cannot fix it. He asks Tennijo if he is playing futsal to let him join. Nemabukuro and Kitao challenge Tennijo and Haru and say they can play two-on-two. The first team to score three goals get the court. Tennijo was not interested since he wanted the kids to play, and Haru told him that they could beat those guys, and the kids would get the court.

2v2 begins, and the kids get worried since they have never seen Haru playing futsal. But they are confident that Tennijo will make it. Haru told Tennijo that he had recently begun playing, but he will be okay. Tennijo told Haru to pass the ball to him, and they played while touch, then dribble pas Kitao, and Tennijo scored the first goal. Haru gets excited, but Tennijo thinks that Haru is still an amateur. Tennijo did the same trick and dribbled past Nemabukuro and scored another goal. Haru realizes that they need a goal to win the match.

Futsal Boys Episode 2 will be released on 16 January 2022. Haru impresses Tennijo by flicking the ball and scores with a stunning header. They win the match 3:0, but Nemaburuko refuses to accept defeat. Toi Tsukioka, another futsal star player, joined them and told them not to fight. Toi told the two to join him at the futsal club at the gym. The kids thanks to the duo for helping them. Let’s look at Futsal Boys Episode 2 official details.

Also Read: The Beginning After The-End-Chapter 128: Will The DC Committee Expose The Culprit?.