From the acting to the sets, everything has been on-point! 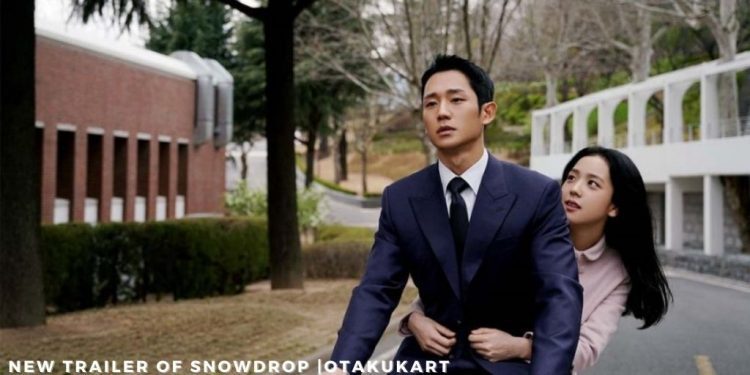 JTBC has now released a new fully-detailed trailer of Snowdrop. Fans have been thrilled by the amount of content they have been getting even before the release of Snowdrop. However, the newly released trailers of Snowdrop have been showing the drastic change of events after Jisoo, and Jung Hae In met. The audience knows that something really bad must have happened to Young Ro. The audience was completely thrown off their seats by how different the recent trailers have been than the older ones. The older trailers made the audience think that Snowdrop would just be a rom-com between Jisoo and Jung Hae In. But what they didn’t know was that the kdrama would be an absolute tearjerker. Make sure to be ready with your tissues when you watch this kdrama

Other than an absolutely beautiful storyline, the kdrama has a mind-blowing amount of talented actors and actresses. From Jung Hae In, Jisoo, Yoo In Na to Yoon Se Ah, Kim Hye Yoon, Jung Yoo Jin, and Jung Seung Jo. The number of talented people in the cast is literally insane. Plus, the winter and director had also worked in the legendary k-series SKY Castle. And as the story of Snowdrop has been in work for about 12 years, it is surely going to be magnificent. From the enchanting romance of the main leads to the horrifying incidents taking place in the future, Snowdrop has lived up to its name of the most anticipated kdrama of 2021.

The New Trailer Of Snowdrop Takes A Terrifying Turn

Just like most of the trailers, this new trailer had started out with romantic scenes of Jisoo and Jung Hae In. From them dancing to gather to their wide smiles, it seemed as if nothing could go wrong. But what they didn’t know was that it was just the silence before the storm. The trailer quickly shifts from a romantic shoot to a very scary scene. The government has just joined forces with the north and has planned something very dreadful. Also, some of the people in the audience think that Young Ro’s university was opposing the government’s plan.

Maybe that is why a hurl of people with guns break-in into the college and start shooting the students. Yoon Sea Ah could be heard saying that if they want to win the elections, they would have to kill all of them. Jang Seung Jo and Jung Yoo Jin had been on guard for whatever danger that might be coming. And in the next scene, a car had crashed into another. Honestly, everyone watching the trailer must have got goosebumps when Yoo In Na, with her head covered with blood and fear in her eyes, shouted at the people carrying the guns to stop shooting. The whole trailer was one hell of a ride. The terror the characters were feeling could be felt through the video. This new trailer probably proves why Snowdrop must be in your watchlist.

Check Out The Cute Interactions Of The Cast

Along with the trailers and posters, the cast’s chemistry has been exciting fans a lot. The cats seemed o e very comfortable around each other. In the first script reading, they helped each other out with practicing their lines and even dropped jokes here and there. Especially, Jung Hae In and Jisoo have been getting a lot of attention for their on-screen and off-screen chemistry. The two seem to be siblings for some reason. Both of them even take care of each other out and also can’t help but pull each other’s legs.

In an interview with Harper BAZAAR Korea, things took a hilarious turn when the two were told to draw each other. While Jisoo tried to draw Jung Hae In as a handsome and charming young man, Jung Hae In went for the easy option and just drew a bunny. Fans couldn’t help but laugh at Jung Hae In’s representation of Jisoo. Jung Hae In further flattered everyone by saying that his first impression of Jisoo was that she has pretty eyes, is very pure, and has bright and positive energy. Fans can’t wait to see their amazing chemistry in the kdrama itself.

Also read: Snowdrop Kdrama Update: The Cast Of The Kdrama Gives Insight Into Their Characters