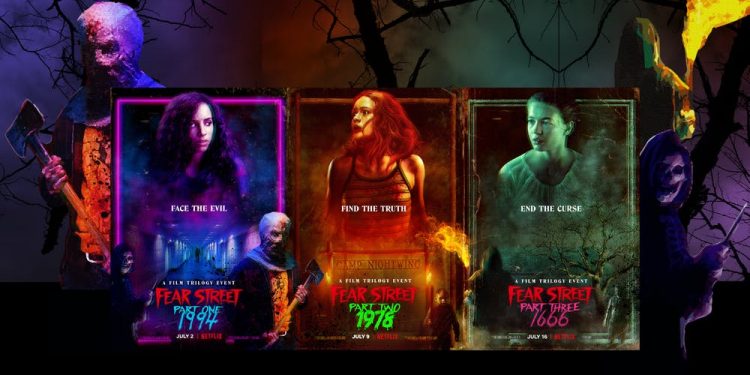 With a notorious past and a series of brutal slayings, a teen and her friends take on an evil force that’s plagued their town for centuries. Fear Street is a fictional story between teens of two towns encountering paranormal activities. The sporadically tedious vibe continues as the widespread killings make the appearance. Behind the execution of horror fundamentals, the series has a great emotional impact on the audience. The perfect filming locations of Street Fear make it worth watching.

The structural ambitions of the two towns and the story behind the making are what tempt you most. The film percolates confidence as the production gave perfect blaze to the effects. The film is taken in the towns of Shadyside and Sunnyvale. Perfectly depicting the name given to the towns makes it a tempting place for the viewers. Would you like to visit the towns? Well, let’s find out is it possible or not.

Fear Street Part 1 was mostly shot in Georgia, USA. The production involves several places in Atlanta, East Point. Many places like Hard Labor Creek State Park, Lithonia,  were used as the production places. Considering the need for a lot of places to cover the entire shoot, the production needed a different site scene. Production hence stumbles upon the famous North Dekalb Mall for most of the scenes.

The series has a tempting star, and as the name suggests, the fear is carved within from the very forts moment. Heather, a bookstore employee is doing her normal daily job when suddenly her friend Ryan Torres stabs after murdering several mall employees. As he tries to escape, the head of the police sheriff Nick Goode shoots him in the head and declares him dead. The murder capital of the United States, Shadyside, is assumed as the norm for the massacre. There is a widespread belief among the teenagers of the town that all this is due to the witch. Sarah Fier, the witch who was executed for witchcraft in 1666, put a curse on the town. And now the people of 1994 are suffering the after results of the curse.

But some people do not believe in the Fotcher witch and are continuing their lives, thinking this massacre was just another criminal act. Among them is Deena Johnson, who has recently broken up with her girlfriend Sam. Denna’s brother, Josh, has a keen interest in studying the town’s history and continues his hunt with his friends. The children of both the town, Shadyside and Sunnyvale, meets at the vigil for the victims of the massacre. But at the end of the day, Sams’ boyfriend Peter started hounding the shady sides of teenagers, and a fight breaks out. Due to this, Deena was almost about to throw a cooler at the car, but something happened to her, and she stops. Peter’s car crashes, and Deema is having a sudden nosebleed, due to which she lost her grip. Sam is luckily rescued, but she is nose pretty sure to see a vision of Sarah Fier.

Later that night, Peter is stabbed in the back by the skull mask, and he is killed a lot after Peter. The skull mask is, however revealed to be Ryan while Simon is attacked by another killer from 1965. Deena and Sam tried to convince the police but did not succeed. The car accident made Sam bleed on the graves of the witch Sarah Fier disturbing her only remains. Tommy Slater decided to attack them hence disrupting the peaceful burial of the witch. The roup later understands that the bandits are attracted to Sams blood and are on a hunt for Sam.

Sam agrees with the group to be sacrificed. The group made plans for killing Sam and reviving again only if she vomits up the pills. While Simon is trying to defend the Shadyside killers, the Skull Mask pushes kate through the bread slicer. Meanwhile, the killer kills stabs Sam with an ax. However, Deena reives Sam using CPR and Epipens. Somehow, police placed the blame on Simon and Kate as they have a past of selling drugs. Sam and Deena come out as a couple, but later, Deena got a call from C.Berman, who tells her about Sam. Sam is now possessed and attacks Deena. The series ends with Sam tied up.

The three-series movie was shot in a span of 160 days, and the second part was filmed third. This part is also filmed in Atlanta, Georgia, and the surrounding areas. The fear town of Fear street’s Shadyside seems to be real but is it actually real? Well, no, the town is all a setup. Although there is a town named Shadyside in Ohio but is totally different from what we see in the movie. This implies that the town is totally fictional.

As Sam is possessed now, Deena and Josh reach out to C.Berman to find the solution. In 1978, the sour relationship between the teenagers of the two villages continues, and they’re finding ways to eliminate each other. Ziggy Berman has then tied up with a tree and beaten by the teenagers of Sunnyvale. The kid then finds Lane’s diary, which notified them of the pact that the witch before she dies. Sarah cut her left hand before the evil to make herself eternally live forever. The children continued with the map and reached Sarah’s house, where they found a list of killers including Tommy’s name. Arie is now stabbed by Tommy, but the girls somehow manage to escape.

As they enter inside the cave, they find a pile of organs which, when touched, spoke the past of fate. Cindy manages to find the two, and soon all three of them reach the opening of the cave. An outbreak begins between the two towns, and every single person is chasing the other to death. Ziggy and Gary reach to rescue the two girls in the cave but encounters Tommy in between, and Gary ended up decapitating by Tommy. Ziggy hides with Nick, but then again, Tommy finds them and injures Nick. Tommy’s next target is Ziggy, but Cindy attacked him from behind and saved Ziggy. Cindy killed Tommy putting an end to a major threat. Meanwhile, Alice found the witch’s hand and ends up bleeding as she was sitting next to Satan’s stone.

In the pursuit of putting an end to the curse, ziggy mistakenly bleeds on hand and sees a vision of the witch. The curse is again up, and many killers are resurrected. Ziggy, along with Cindy, rushes to the tree where Sarah was hanged, and in order to save Ziggy, Cindy sacrifices herself to the killers. The two are murdered. Ziggy is somehow saved as Nick performs CPR on her. Deena and Josh found the witch’s body, and now, with the hand, they can end the curse. Both of them go to Shadyside Mall, dig out the hand from under the same tree. They take it to the place where the body is buried, and Deena reunites the body with the hand. Deena’s nose bleeds, and she finds herself back in 1666, where she is now Sarah Fier.

The third part of the movie series was also filmed in the same locations as the first two were. Atlanta is the base set of the movie, and some other productions are taken Hard Labor Creek State Park in Rutledge in August 2019. The Sunnyvale being the major attention grabbing set, however, is not a real place. As shown in the movie that Suunyvals and Shadyside are two neighboring towns with Shadyside river in Ohio in the middle. But The town is nowhere to be seen around the Shadyside town in Ohio.

As Deena finds herself in the year 1666 as Sarah Fier, the long story of truth unfolds. She finds out that Deena was actually not the one behind the mishappenings in the towns. In the year 1666, when the two towns were actually one, Sarah was deeply in love with Hannah, with whom she found the secret behind the witchcraft. The night Sarah, Lizzie, and Hannah meet the widow, Sarah finds a book of black magic, and that day was the advent of the mysterious curse on the town. Miller started acting differently as the town’s food and after was poisoned. Town claimed Sarah and Hannah as the ones to put the curse on the town and declared their execution. Sarah somehow manages to escape leaving Hannah behind. Sarah then found out that the widow was murdered, and the book was taken by Solomon.

Solomon uses the bok to gather ultimate power and offers to share it with Sarah, but she refused, and the two got into a fight. Sarah lost her hands during the fight, and Solomon took her to the town to be executed with Hannah. Sarah in front of the town claimed that she is the witch and Hannah had nothing to do with it, but the two were killed.

In the present year, Deena realizes that the main reason behind the curse on the town is the Goode family. The curse is carried on by the family as Solomon performed the ritual several years ago. The trio plans on getting nick killed by the town’s thefts n the mall. So they poured Deena’s blood on Nick, making the murderers attack him. At last, Deena kills Nick uplifting the curse on the town.

Also Read: What Order To Watch Fear Street On Netflix? All About The Trilogy