Bachelor Nation is hosting a game night and everyone from The Bachelorette Season 18, eliminated or not, is joining in Episode 8. 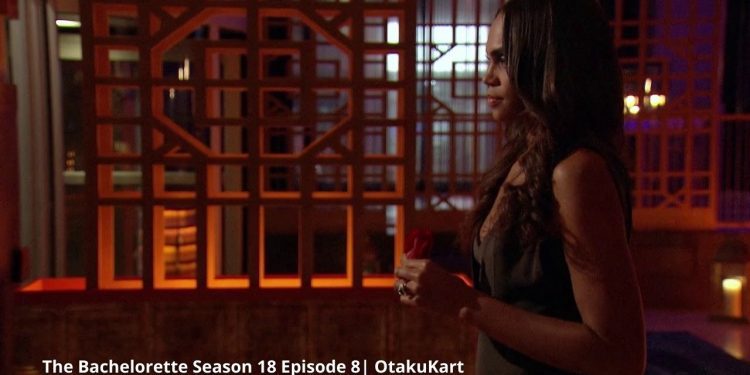 The Bachelorette Season 18 Episode 8 sees every face that appeared on this season returning for a fun night. The Bachelor Nation is hosting a competition that will see the men competing with a new spirit again. Fun aside, there were conflicts that needed to be solved. It seems like this chance to come again on the show is the one some of them were looking forward to. So that they can open up about their feelings. But before we move to the same, Michelle took another big step into her relationships by meeting everyone’s family in the recent episode.

It all began with the sweet Brandon, whose family decided to stay and delay his brother joining the Navy. Even Brandon’s brother was too sweet and wanted to make sure his brother gets the world he deserved. Rodney took Michelle to eat apples before they go to meet the family. Joe, on his side, decided to make sure Michelle lives the Prom Night she dreamed of. Lastly, Nayte’s as well Joe’s and Rodney’s families showed some concerns about the relationship. Here is a detailed look at everything that went down recently on The Bachelorette Season 18 before we move to Episode 8.

Previously on The Bachelorette Season 18, it was Hometowns’ week. First up was Brandon, who took her skateboarding before leaving to meet the family. Brandon’s brother Noah was going to join the Navy, but he delayed it just for his brother. Noah and Michelle clicked in really well as they shared positive notes about Brandon with each other. After meeting everyone and having a fun time, Michelle did admit that she was falling for Brandon, but she had to think twice. This is a show where she admits it but sometimes sends someone home.

Next up were Rodney and his family. After picking up apples in the apple orchard, Rodney took her to meet the parents. While Rodney’s father was quite into Michelle and Michelle admits that his parents raised him right. Rodney’s mother had some concerns, and she believes her son needs to be careful, although Michelle is very sweet. As a mother, she just doesn’t want him to be heartbroken.

Also Read: The Bachelorette: Are Katie And Blake Still Together?

Joe, on his side, before taking Michelle to meet his parents, decided to do something big. He took her to his old high school for a special prom. He never went to one, and Michelle had a heartbreaking story of getting picked up last at promo, which she told everyone through her poem in an episode way back. The grand arrangement gave the couple everything they wanted. Joe’s family knew about his reserved nature and were worried about him and at the same time about his relationship with Michelle.

The last one for the hometown date was Nayte, who took Michelle paddle boarding before leaving to meet his parents. Nayte’s family had similar concerns about their son. The question is, if everything of this is new, how does he know it’s real? There is a chance that Michelle wasn’t really happy after this meet. Still, the episode closed with Rodney being eliminated. It broke Michelle, but she had to make a decision. So she talked to him and walked him to his car.

The Bachelorette Season 18 Episode 8 is releasing on 6 December 2021. It is a “Men Tell All”. The closing moments of the previous episode gave us an insight into what it is all about. All the men from this season’s past are returning for one night for a Bachelor Nation special. They will compete in various games. Also, some of them who had conflicts with each other may end up confronted with this one appearance they get. For example, the trailer sees Jamie, whose manipulating tactics ruined the game for him. Check out the official promo for The Bachelorette Season 18 Episode 8 below.

Also Read: What Happened To Chris Conran After The Bachelorette?