Emily In Paris recently came up with its second season on December 22, 2021. 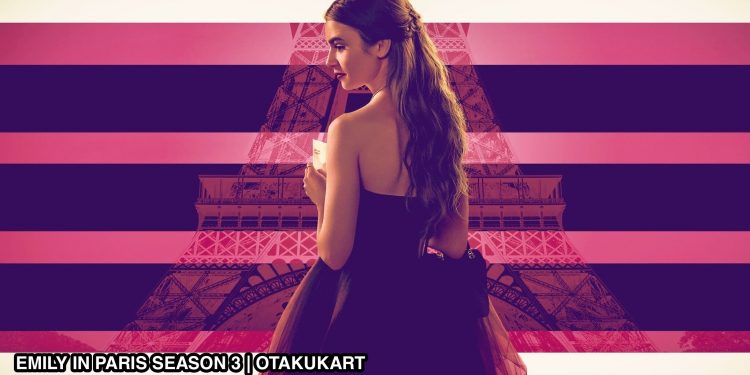 The year 2020 got us multiple shows to enjoy. Moreover, some of them captured our hearts to the core. Just like these shows, Emily In Paris garnered massive attention for its storyline and concept. It is a popular American drama, and it covers up a very interesting plotline to cover with. The increasing popularity of this television show attracted massive people, and this led the creators to come up with its episodes soon. The movie is refreshing for people who are aspiring to set their career in a new country. Since the new season premiered recently, Season 3 of Emily In Paris has become the talk of the town.

Many people shared their opinion about having this show on their bucket list. Moreover, the story talks about the aspirations of a girl in her mid-twenties. Her main aim is to connect the cultures of two different countries at her firm. Everybody wants to explore more from this story. Moreover, you will find popular actors in this show, they are one of the main reasons for the show’s increasing popularity. And guess what? Since the first two seasons are going very well, fans are already looking forward to knowing more about season 3 of Emily In Paris.

The story talks about the life of a young girl Emily Cooper. She is eventually from Chicago, things are going well for her as she works in the marketing field. But slowly, because of her work progress, Emily gets appointed at a very popular firm in Paris. But things turn out to be more difficult for her when she has to face a huge language barrier. Moreover, Emily’s got no knowledge about the cultural proceedings of France. Because of this, she has to deal with major criticisms and comparisons. But she had to deal with massive issues.

Emily’s co-workers often criticized her actions. And because of cultural differences, they made fun of her personality. Even though she was bullied, she still worked hard to acquire this position. Moreover, she gave her best to work harder every day because she wanted to create several memories, but nobody liked her despite all her efforts. Most of them hated Emily’s approach to life. But still, Emily didn’t let it hurt her mental state. She had thoughts of establishing herself in the company. On the other hand, things started to take a different turn after her long-distance relationship fails to work. How will she manage to handle everything?

Emily’s boss hates her, and she never wanted her to be around. And guess what? She is coming up with several plans to make her quit as well. She puts in tremendous effort to communicate with everyone, but nobody wants to speak in English. Gradually, this situation begins to hurt her as all her co-workers ignore her without caring for her emotions. Technically speaking, everyone is jealous of her because Emily landed this job without any prior experience. To be more precise, nobody appreciated her talents, every single person was bothered about her language.

Many fans didn’t appreciate her attitude towards her co-workers as well. Because she expected everyone to speak in English. Gradually, her dream city becomes a nightmare for her. Everything bounces back immediately, and this creates a huge void in her heart. Her previous company wanted Emily to be an American representative at the Paris firm. But with time, things began moving as per her conveniences, but still, her boss never liked any of her ideas and plans. She couldn’t withstand any of her preferences. But Emily’s quirky nature often saved her from multiple disasters.

The first season of this show premiered in October 2020, and because of its popularity, the creators of this show had to renew the show for a second season as well. Moreover, it premiered recently on December 2021. Since then, people have been looking forward to knowing about season 3 of Emily In Paris. There were 10 episodes in total, and it would be the same with this season as well. Moreover, this show was selected for the Emmy awards as well. Since this series had massive viewership ratings in the past year. This gave this show a new title, through which it became popular as Netflix’s best comedy.

Moreover, Darren Star is the creator of this show, he is a popular director and producer. Over these years, he has been pretty popular for making ‘Sex and the City’ and ‘Melrose Place. When it comes to the second season, Emily is stuck with a love triangle, and things become pretty difficult for her to handle. Since Things turned out to be very tiring for Emily, everybody wanted to know if she will choose to leave this place or not. Most of them didn’t understand the ending, as the viewers were left with multiple thoughts.

Well in the second season, you’ll find closure between Sylvie and Emily. Finally, her relationship is kind of improving with her boss. She finally understands that Emily’s ideas are not bad as she thinks because it could get her company to acquire profits for sure. Moreover, Emily gets her training to learn French, through which she ends up making a couple of friends as well. But still, she had to make a lot of choices in her life. Emily has surely turned pretty arrogant, and this affects her decisions. But still, what will happen to the love triangle between Emily, Camille, and Gabriel.

Towards the ending of Emily In Paris, you’ll notice that the creators have provided the viewers with a major cliffhanger. This, in turn, caused a lot of divisive opinions. Moreover, fans were expecting more. Well, Emily had to figure out major decisions in her life, and we get a glimpse of that. When it comes to the love triangle between Emily, Camille, and Gabriel, things worked out in Camille’s favor. As the two love birds got back together. In some ways, this didn’t make Emily happy, but still, she spent a lot of time getting them together.

Emily is finally getting used to the working patterns and lifestyle of Paris. Moreover, she found the love of her life, Alfie. But Emily realizes that she’s deeply in love with Gabriel, she immediately leaves for his house, just to tell him about her feelings, but she discovers that Camille is moving back in. By now, Madeline is back in Paris, none other than her pregnant boss who sent Emily to work in her place. Madeline steps in and tries to get in with her plans. And this causes a lot of trouble for Emily.

Towards the end, Camille forgave Emily, but they won’t be fixing their friendship for now. Things become even more problematic after Madeline forces Sylvie to include designer Gregory Dupreé in their plans. Even though this could lead to a huge misunderstanding between Sylvie and Pierre Cadault. He is one of the most loyal clients to this company. But soon, things quickly go out of hand, and Madeline puts the entire blame on Sylvie. Leading her to resign. But now, Madeline wants Emily to herself, but Sylvie doesn’t want to let go of her. Now the major cliffhanger of this season is that Emily is stuck between two bosses, which one will she choose?

The second season of Emily In Paris just arrived recently, on December 22, 2021, but it ended with a cliffhanger. Since then, fans have been very interested to know more about the arrival of Emily In Paris Season 3. But there’s no confirmation yet. The creators of this series are not looking forward to the show’s release. But because of the abrupt ending, fans are still waiting to figure out Emily’s decision in the end. If this season acquires fame like the previous season, there is a very high chance that season 3 might come out.

The role of Emily Cooper is presented by the popular actress Lilly Collins. Moreover, Darren Star didn’t reveal any details about the next season, there are a lot of things left to know. Even the second season didn’t cover any details about the same. Moreover, from the very start, the creators made sure that every character is highlighted properly. So, there’s a huge chance. Fans are pretty sure that they’ll release the announcement without any hint. Until then, let’s hope for the arrival of the third season.