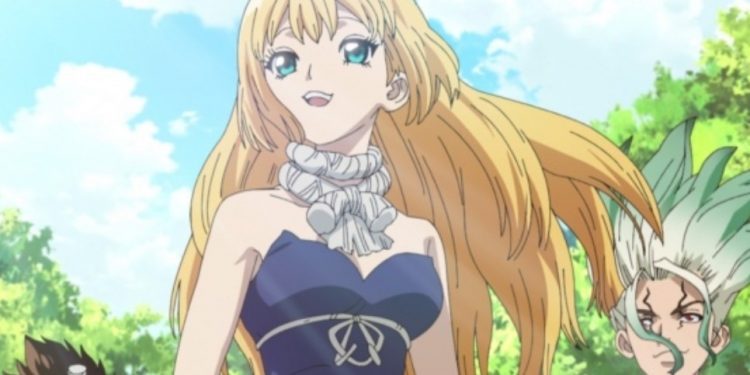 Dr. Stone Chapter 225 returns this coming week after getting delayed. The Science Kingdom set the moon, but only three Heroes were allowed to go. They even took Stanley despite sharing a sour past with him. Stan knows that he is working for his master Dr. Xeno He doest care whether the trip to the moon involves Senku and his party. Dr. Stone’s latest chapter reveals Byakuya’s mysteries after the three heroes arrived in space. The chapter begins with a rocket leaving the earth at full speed.

Senku had dreamed of his pst as he left for the moon. He saw everything he had gone through while building a rocket with others. Senku knows that it was a long journey despite including Xeno in his plans. He remembers when he spent with his crew and Xeno while crafting the rocket completed after many attempts. On Stone World, everyone realizes that the trip to the moon was a success. They are glad that Senku, Xeno, and Kohaku will make it to the moon. Chrom, Gen, and the others wait for Senku and talk with them.

They know that once the rocket’s piece gets separated, the three heroes will get revived and communicate with them when they arrive in space. Dr. Xeno prepares the communication device since he will reach the three heroes soon. The Stone World is filled with joy and waits to hear from Senku and the others. Later the rocket arrives in space, and we see shining stars. Inside the rocket, the revival fluid explodes, and the three heroes wake up after getting revived and realize that they will land on the moon soon. Senku was the first to wake up and smile that they would make it since he knew they would never fail.

Senku thinks alone while waiting for the others to wake up, and Stanely wakes up. He notices that Stan is thinking about taking some cigarette chewing gums. Stan looks at his pocket and cigarette chew gums since he knows they cannot smoke inside the rocket. Senke told him that he knew he would be the one to wake up before everyone. Stanley realizes they share a bad past, but he is glad that they have the same goal since Dr. Xeno wants them to succeed. He reminds Senku about the past they face through countless battles.

Senku admits that it was hard since he knows that Stanley has been after them for so many years. Stan wanted to talk more about the past, and Senku told him they could save that next time. Dr. Xeno and the other guys on SDtone World connected with Senku’s party. Gen was excited to hear Senku’s voice and wondered how things were going on there. Dr. Xeno reminds them about the rules and things they have to follow. They had a long conversation, and everyone had a say.

Later Kohaku wakes up, but she is at the window, and Senku wonders what she is doing there. She told him about the stars since she never expects to see them like that in space. Dr. Xeno told them about the old rockets that don’t have windows. He also talked about how Scientists solved those problems since the astronauts wanted to see things around them as they traveled. Kohaku talked about the stations that were once in space and about the Byakuya’s history that happened in space. She asks Senku about it and his father.

Dr. Stone Chapter 225 will be released on 16 January 2022. Senku told Kohaku the Byakuya’s history and that things they left in the space are no longer there since they fall like shooting stars. Kohaku knows that Senku’s father experienced the same things as Senku since Senku’s father has once visited the moon. Senku also enjoyed the food that Francoise prepared for them, and Stan was glad that they ate space Ramen. Let’s look at Dr. Stone Chapter 225 official details.

You can read Dr. Stone-Chapter-225 online on VIZ Media’s official website. Dr. Stone Manga’s latest update and recent three chapters are also serialized on Shueisha’s online magazine & Shonen Jump. Senku knows that the mission will succeed, and they will soon combat against why-man. The trio finished eating space ramen and continued with the journey. They will land on the moon soon. Let’s meet when Dr. Stone-Chapter 225 is released.