The final race has begun! Se Won has to find Do Yoon before Dr. Myung completes his evil plan. To do that, he needs Jae Yi's help. Find out how the couple saves their son in the last battle. 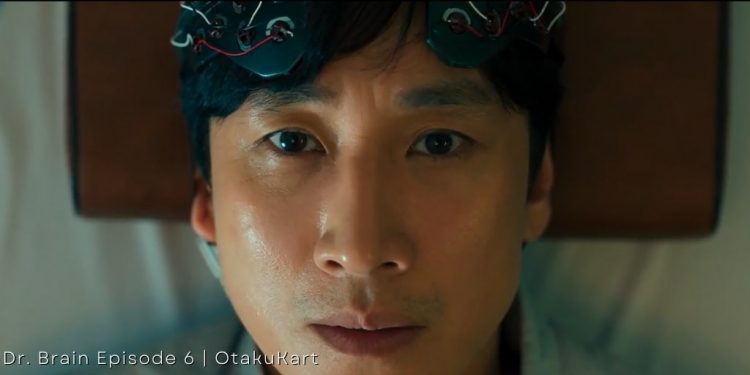 With the final mystery of this sci-fi tale, Dr. Brain Episode 6 is coming soon! Only one episode is left, and we are almost close to finding out Do Yoon’s location. To do that, Se Won has to do Brain Sync with his wife, Jae Yi. However, Jae Yi’s complicated emotions become hindrances for Se Won from finding her son’s whereabouts. Like Private Detective Kang Mu states that there must be something that Jae Yi has heard or seen to become this sure that her son is alive. Therefore, the race against time has begun!

The latest episode reveals that Se Won learns about Dr. Myung’s involvement in Do Yoon’s kidnapping. Meanwhile, Officer Choi Soo Seok and Sergeant Park go to the temple to find Hong Nam Il. Although they find Hong Nam Il, Sergeant Park losses his life while catching the Fixer. After interrogating, Officer Choi discovers everything Nam Il’s doing behind Se Won’s back and how deeply rotted their research plan is going on. Even though we have learned about the ringmaster of this brutal play, we have not found our innocent Do Yoon yet. Therefore, Dr. Brain Episode 6 will reveal the last chapter of this sci-fi mystery, leading us to Do Yoon’s location!

Recap Of Dr. Brain Ep 5 – Se Won’s Past Links To Do Yoon’s Disappearance

Ep 5 of Dr. Brain shows how Officer Choi finds Hong Nam Il. But during the process, she losses her brother – like colleague Sergeant Park. Meanwhile, Se Won confronts Dr. Myung, with whom he had spent his whole childhood after his mother’s death. The episode shows Se Won’s past, revealing that he had been working on this Brain Sync research since a young age, and Dr. Myung knew about it. Dr. Myung wanted to take him to California, but Se Won did not trust the investors and moved out of his house.

However, that did not stop Dr. Myung from advancing his research, his greed. He used Se Won’s research plan and applied that in his California research center, where countless homeless people lost their memories as well as lives. Since the government conducted an investigation, they had no option left but to leave California and return to South Korea. Even after coming back, Dr. Myung did not rest and planted his spies, Hong Nam Il and Yoo Jin, around Se Won to get updates on Brain Sync. Officer Choi also learns about the same from Hong Nam Il while interrogating him.

After meeting him, Se Won learns that Dr. Myung, who is on the verge of death due to cancer, plans on conducting a Brain Sync with Do Yoon. All of this is for his ridiculous immortality because, after Brain Sync, not only memories, that person’s habits, preferences, actions, and all of the things transmits to the other person. That way, he can be Se Won’s father as well as his son. What an absurd idea, isn’t it? Understanding his goal, Se Won losses control and attacks him. However, Secretary Yoon injects him with drugs, and he ends up losing consciousness.

In the middle of the mess, Kang Mu hints about Jae Yi’s involvement and how she was sure of Do Yoon’s living truth. Therefore, Se Won conducts Brain Sync with his wife, Jae Yi. He even asks Hong Nam Il to help him. During Brain Sync, Se Won not only meets Jae Yi but also Lim Jun Ki. It makes the whole process more complicated since they get in a fight! Hence, Dr. Brain Episode 6 will unveil the relationship between Jae Yi and Jun Ki. Also, what are the clues hidden inside Jae Yi’s mind!

#DrBrain really knew how to put the puzzle pieces along the way. #DrBrainEp5 is the penultimate episode, but we’re still looking for some missing pieces. I wonder how it will end.

Everything about this series is so consistently perfect. Acting, plot, cinematography, and music 🙌🏼 pic.twitter.com/nVud7FUQao

Dr. Brain Episode 6 will be released on 10 December 2021 on Apple TV+. Finally, the last episode is left. The drama has uncovered all secrets except Do Yoon’s whereabouts. To find that, we have to delve into Jae Yi’s memories. However, that does not seem easy! Because Dr. Brain Ep 5 has shown Jae Yi’s resistance against Se Won. Will Se Won find a way out of this and save his family, which is on the verge of falling apart? What are the secrets hidden inside Jae Yi’s memories?

Besides the hints about Do Yoon’s disappearance, Episode 6 will also reveal the true connection between Jae Yi and Jun Ki. Like many fans already expecting that she has cheated on Se Won with Jun Ki. But the truth can be completely different! Now, the race against time has begun, and Se Won has to find Do Yoon before Dr. Myung completes Brain Sync with the little boy. Will Se Won win the race? Or will he be late and lose his only son? Watch Dr. Brain Episode 6 this Friday to know how this thriller sci-fi tale ends.

The Korean drama Dr. Brain will be streaming on Apple TV+ for domestic and international viewers with English Subtitles. For Apple TV streaming, you will have to buy their subscription plan. It may change according to different countries. You can start with 7 days free trial plan and then move to $4.99/month.