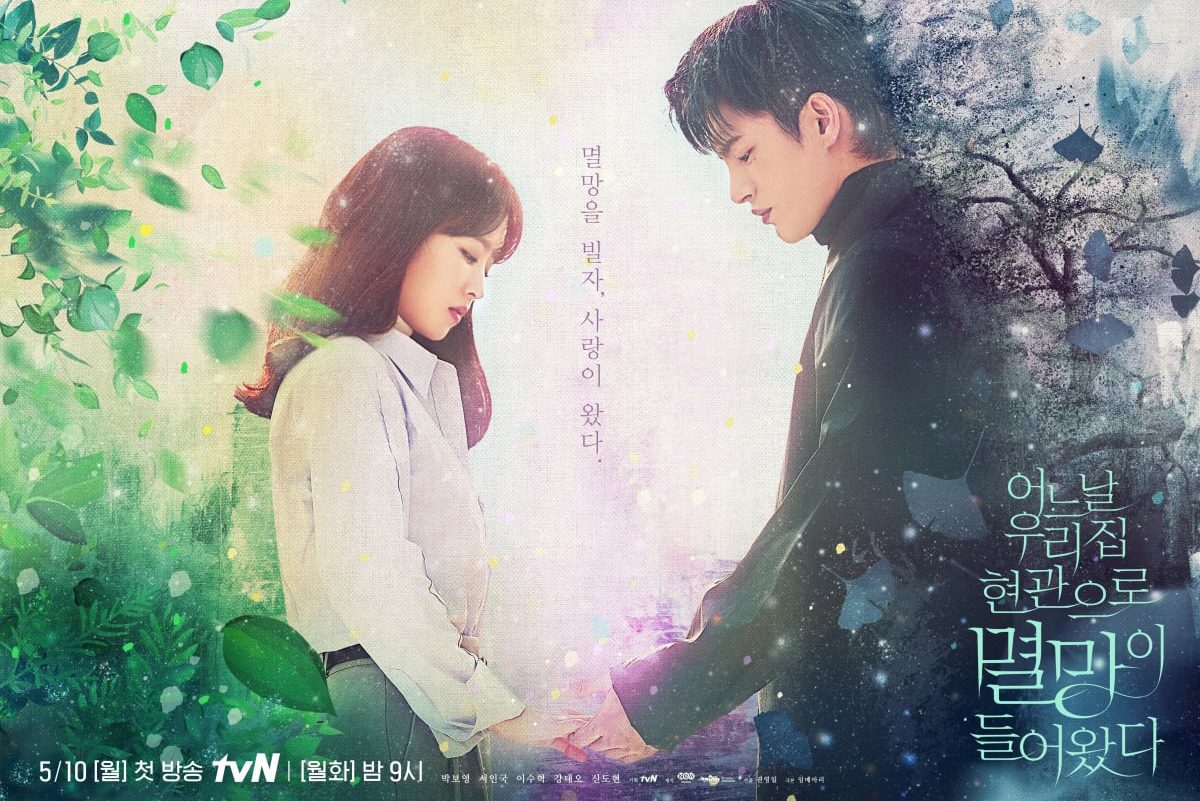 Doom at Your Service, 어느 날 우리 집 현관으로 멸망이 들어왔다 in Korean is a South Korean television drama series. Doom at Your Service has Kdrama fans beyond excited as it will mark the return of the adorable Park Bo Young and the handsome Seo In Young to our television screens. Park Bo Young was last seen in Abyss in 2019, and Seo In Guk was seen in The Smile Has Left Your Eyes in 2018. As these two favorites of the kdrama fans have stayed away from our television for so long, fans cant wait to see them on-screen again.

Doom at Your Service is the story of Tak Dong Kyung, who after working hard for years, is finally financially stable in her life as a web novelist, but life is not all soft petals and roses for Tak Dong Kyung as she discovers that she has a life-threatening illness. The drama will be aired on the 10th of May 2021 at tvN who has been constantly keeping the fans on edge by releasing beautiful portraits of the main cast. An interesting fact is that the main male lead is named Myeon-Mang, which literally translates to ”doom” in the Korean language. In this article, we will be giving you all you need to know about the main characters of this drama. 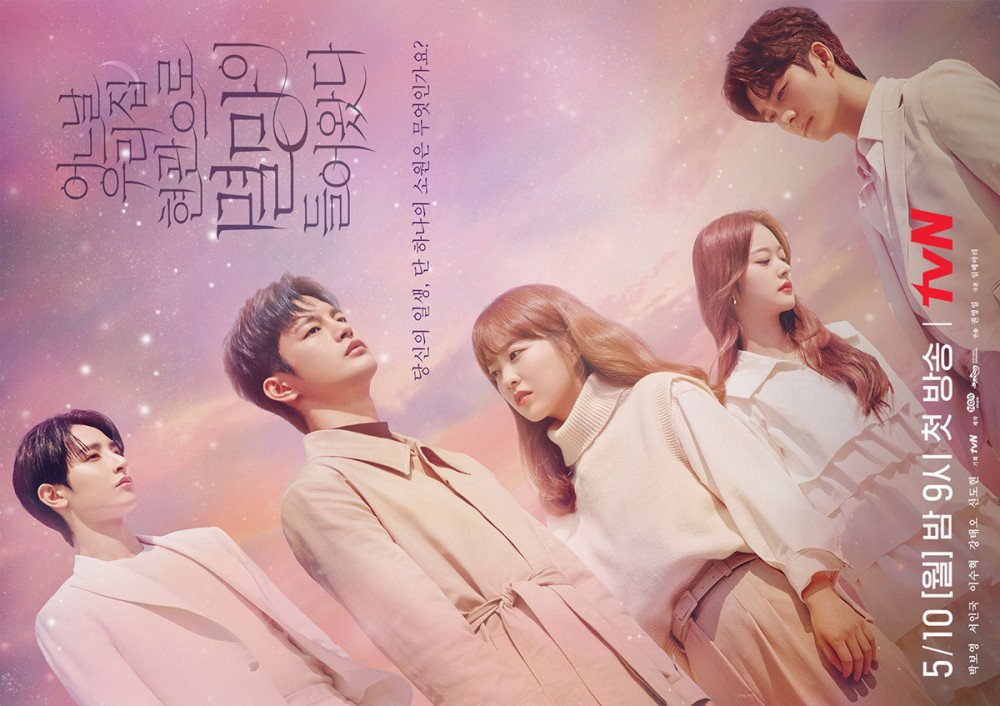 Fans were excited for this show even before any information about what the show was going to be about was released, just by hearing about the cast. Doom at Your Service is an upcoming fantasy romance drama that focuses mainly on the love story of two people, Tak Dong Kyung and Myeon Mal, who have terribly sad fates.

Park Bo Young plays the main character, Tak Dong Kyung whose parents died in an accident when she was very young. She is very hardworking and works as a web novel editor at a publishing company called Life Story. Tak Dong Kyung has a younger brother named Tak Sun Kyung, who is currently looking for a job and has no money, so she has to provide for him as well. At the age of 28, when she finally thinks that she is in a stable position in her life, she is shaken and heartbroken when she discovers she has brain cancer.

Tak Dong Kyung blames her ill fate and blames her sad and ill fate. The character will go through a lot of heartbreaking emotions, and there could not have been a more perfect casting than Park Bo Young for this. Park Bo Young is most popularly known for playing the main lead in amazing dramas such as Strong Women Do Bong Soon in 2017, Oh My Ghost in 2015, and Abyss in 2019. All these dramas, along with Doom at Your Service, have one thing in common: they are all fantasy dramas. She has starred in popular movies such as Scandal Makers in 2008, A Werewolf Boy in 2012, and On Your Wedding Day in 2018. She has been winning many prestigious awards for her praiseworthy performances.

Seo In-guk plays the character of Myeon-Mang. Myeon-Mang is not an ordinary human being, he acts as a messenger between Gods and Humans. Myeon-Mang has the power to make anything he touches vanish. He has been living a lonely and aimless life and follows his fate without any passion or intention. Tak Dong Kyung makes a contract with Myeon-Mang to give her 100 days full of happiness while keeping her life and love on the line. Seo In-guk, with his sad and emotion-filled eyes, is perfect for the role of Myeon- Mang. His age is not known and the only connection he has is a fellow female goddess. He has been awarded the Excellence Award at the MBC Awards, Best New Actor at KBS Awards, and many more. He was even nominated for the Best New Actor Award at the 49th Baeksang Awards for his whole role in Reply 1997.

Lee So Hyuk plays the bossy and full of himself character of Cha Joo Ik.  Cha Joo Ik is the head editor of the novel publishing company where Tak Do Kyung so happens to be working too. Lee So Hyuk is an actor and was also a model technically, he is a model turned actor. Fans who might inspect the music videos of GavyNJ in 2009 and 2NE1 in 2010 might have seen him. Lee So Hyuk has walked down the runaways of the nation’s best fashion brands, including ‘General Idea’ and ‘Song Zio’. He has also done cover shoots for Elle, Baazar, and GQ.

Le So Hyu had a guest role in the movie” My Boss, My teacher” in the year 2006, he got well known for his role of the boy in the romantic movie ”The Boy From Ipanema”. He has acted in the kdramas, such as the role of Choi Gun Wook or Gary Choi in the drama Lucky Romance. He had won the Best New Actor Award at the MBC Awards for his role of Gwi in the drama ‘Scholar Who Walks The Night’, Best New Model in 2007 at the Korea Fashion Photographers Association, Best Dressed in the model category in 2008 at 25th Korea Best Dresser Swan Awards, and Best Dressed in the actor category in 2014 at the 29th Korea Best Dresser Swan Awards.

Kang Tae Oh plays the role of a café owner Lee Hyun Gyu. Lee Hyun Gyu has a teacher-student relationship with Cha Jo Ik. His relationship with Na Ji Na is like first love from both sides. He is a member of the boy group 5urpise and is also a talented actor. Kang Tae Oh is currently signed under Man Of Creation (M.O.C.)  His debut drama was The Clinic For Married Couples: Love And War 2, where he played a minor role of Joo Won in 2011. He has starred in the kdrama ‘The Tale Of Nokdu’ where he played the lead role of Cha Yul Moo or Grand Prince Neung Yang. He has been awarded the Impressive Actor Award in  2015 at the 2nd VTV Awards for his role of Lee Jung Su in Forever Young.

Where To Watch And Episode Schedule

The episodes are will be premiered on tvN, ViuTv and Rakuten Viki. The drama will have 16 episodes. It will start premiering on May 10, 2021, and will continue premiering till June 29, 2021. Each episode will air on Monday and Tuesday, with each episode being  1hour and 10 minutes long. The episode schedule is given below-