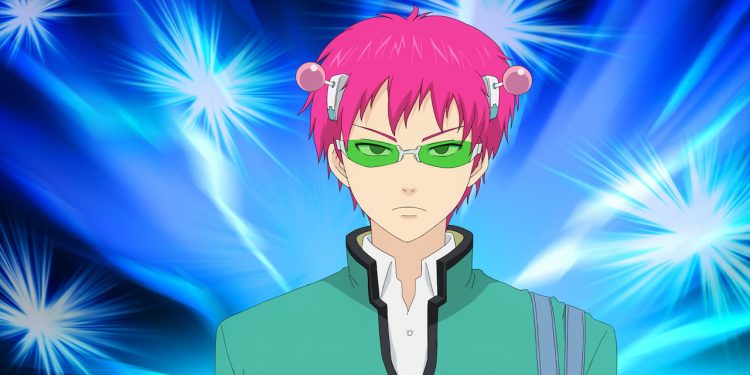 For someone who has almost every superpower there is to exist, life can never be exciting or interesting. Saiki Kusuo was born to a family of two ordinary people. Saiki had supernatural abilities even before he was born. He was born a girl but became a boy an hour later. He started talking to his parents when he was two weeks old through telepathy, started walking in the air at one month old, and even ran his first errand at one year old. Kusuo’s parents are not very bright, and they just raised Saiki like they would any other kid.

This show is a slice-of-life anime, and it has received a lot of good feedback. There is no fixed storyline in the show since all the episodes have different plots. It’s filled with all kinds of misfit characters and is almost like a parody of the generic anime characters that are portrayed in other series. It shows how Saiki is trying his best to try and live an everyday life despite having every psychic ability there can be. The show humorously covers all the problems Saiki can have – from him not being able to enjoy a book thanks to his Psychometry, all the way to the destruction of the city because of his sneeze.

We see Saiki attending school as a 2nd year High Schooler this season. In the first episode, Saiki doesn’t have any friends except for Nendou Riki. Nendou is so stupid that he is the only mind that Saiki cannot read because there’s nothing in his brain to be read. As the episodes progress, we see Saiki making more friends. There are even girls in his class who have a crush on him, including the ever-perfect Teruhashi. Saiki avoids this confrontation by making the other girl fall in love with Kaidou Shun. Kaidou is also one of Saiki’s classmates who believes that there is a special cult that exists to end the world and that he is the only chosen one to defeat it. We meet a lot of new characters in the show.

This season is not much different than the first one, except that he now has another psychic he needs to avoid. He has a friend group now that he (forcibly) hangs out with almost every day. We meet Teruhashi’s brother, a very famous movie star and a creep, as he thinks he’s the only one who deserves the perfect Teruhashi. There is also a plot where Saiki and his friends get stranded on an island while on a cruise on Saiko Metori’s Ship. They eventually make it back to the city through the help of the police, even though Saiki could’ve teleported them back in no time.

This is a Netflix Original that covers chapters that were not animated before and characters that were not introduced. This version of the Disastrous Life of Saiki K has six episodes and has dubbing available in many languages.

Having only two episodes in this season, we see the end of Saiki’s Second Year of High School. And of course, the last event of the story that could end the world – The Volcano Eruption.

The story of the boy born with pink hair, who wears green glasses and antennas simply can’t be interesting. We see glimpses of Saiki living his everyday life while he narrates the instances in his head like he’s monologuing. The show has a lot of content to give at any time, thanks to the numerous abilities of Saiki Kusuo. He changes the events of the world sometimes to cater to something he wants, but he’s never selfish about anything.

Ever since he was born, Saiki always felt out of place due to his pink hair, so he modified the world into having its norms being changed to colored hair. In fact, he collects money from the pocket money his parents give him despite being able to have anything he ever wishes for. He’s straightforward and dull at times, but he’s kind-hearted and to shows in many instances in the show. The way he deals with everything in life after knowing everything about life must be very boring to others, but that is all that he ever wishes to be – Average and Boring.

Where To Watch “The Disastrous Life of SAIKI K”

The show is available on Netflix to watch, along with the reawakened version. It is even available on the “Funimation Now” website as well as Tubi TV. You can even watch it on Amazon Prime.

Also Read: Strongest characters of Haikyuu!! from Anime and Manga