Dexter might have thought that all his threats came to an end but he might have missed to notice that Angela is almost close to finding his dark secret. 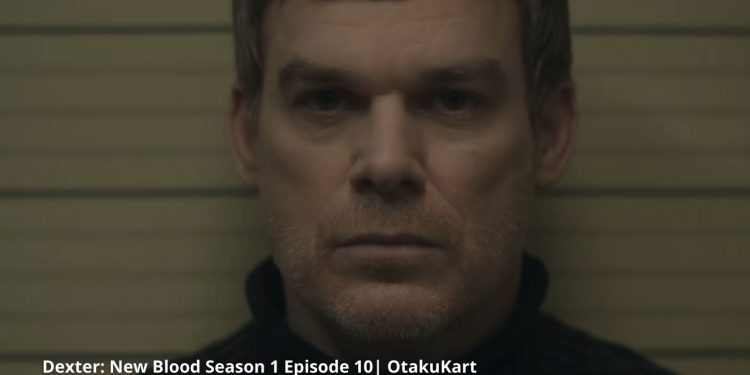 Dexter: New Blood Season 1 Episode 10 shall finally show if it is happily ever after for Dexter and Harrison or there is much more to be taken care of. For the entire first season of Dexter, while he was struggling to find himself connecting with his returning son Harrison, a new serial killer was in town. The killer was hunting down young, innocent women. Well, the chapter of the serial killer, that is Kurt, came to a wrap recently. In the process, Dexter also showed what he really is to Harrison. The only thing he failed to notice was someone close to him picking on his trail.

While Dexter was busy with Harrison to take care of Kurt, the serial killer didn’t actually skip town when Dexter came to rescue his son. Instead challenged them. Angela, the town’s sheriff, also Dexter’s girlfriend, was busy noticing the similarities between some situations of these murders and the popular Bay Harbor Butcher case. With every step, she was getting closer to realizing that one way or another, Jim/Dexter has some sort of involvement with this and also the murders in the town.

Previously on episode 9 of Dexter: New Blood, we opened up with Dexter retelling the story of Mr. Wiggles. He is in conversation with Harrison, whom he promised to tell the code to control his urge to kill. While he tells the story, he keeps away the fact that, in the end, he kills the murderers who hurt innocent people out there. Initially, it makes Harrison believe that his father is some sort of vigilante, more like Batman.

Deb’s visions tell Dexter to stop telling him the story further as there will be more questions coming. Somewhere Dexter wants his son to ask them. Meanwhile, Angela continues to focus on the Bay Harbor Butcher case to find similarities with the suspicion she has on Dexter. Molly’s podcast of her claiming that she always believed they got the wrong man makes it more convincing. Dexter and Harrison later join Angela and Audrey for exchanging Christmas presents until Kurt knocks on the door.

Also Read: Can Nolan Put Jason Behind Bars in The Rookie Season 4 Episode 11?

While Kurt leaves by mocking Harrison, Dexter feels the need to leave. He tells Angela about taking Harrison to shoot and spend some warm father and son time. Angela feels weird but believes it because it’s been a long time since they were together. She later finds Molly missing with her camera and recorder left behind. Dexter and Harrison have left to find proof against Kurt. Dexter states a serial killer always keeps some sort of trophies for himself from his victims. Harrison still believes this is to put Kurt behind bars, but Dexter wants to kill him.

The father-son duo reaches out to Kurt’s property, and Dexter purposefully trips on one of the ropes to trigger a camera that notifies Kurt. They do find his trophies that are the recreated bodies of his victims that now include Molly. Meanwhile, Kurt was out there putting the cabin of Harrison and Dexter to fire, believing they were inside, but no. Kurt plans to leave the town but is caught by the father and son duo. After a brief conversation of confessions, Dexter kills Kurt in his classic way as Harrison watches. Initially, he feels fine until the blood reminds him of his mother’s death.

As they come out, Dexter tells him this is the way he controls his urges. They return home to find Angela and Audrey around their burnt cabin, worrying about them. Dexter sticks to his shooting story. Audrey asks them to come to stay with them. The episode closes with Angela receiving a letter stating Jim/Dexter killed Matt Caldwell.

Dexter: New Blood Season 1 Episode 10 will be released on 9 January 2022. It is titled “Sins Of The Father,” and it will mark the end of the first season run. The official synopsis of the upcoming episode suggests that the father and son duo of Dexter and Harrison looks forward to a happily ever after. Especially with Kurt out of their way as a threat and the town back to being normal.

The only thing is they don’t see the threat coming from one of their close ones. For the past few episodes, Angela has been noticing the dots that tie the murders and situations around it to Dexter as well. On top of that, Dexter’s obituary, his past, and the Bay Harbor Butcher case have a lot to tell too.

From catching the wrong guy to the noticeable scenarios to current events involving Dexter. The previous episode closed with a striking letter that points the fingers at him too. Will this lead Dexter and Harrison to switch towns again to do what’s necessary for them? We may soon find out in the season finale of Dexter: New Blood.