Dexter might have managed to save Harrison, but at this point, its just not Kurt who is on their tail as we move to Dexter: New Blood Season 1 Episode 9. 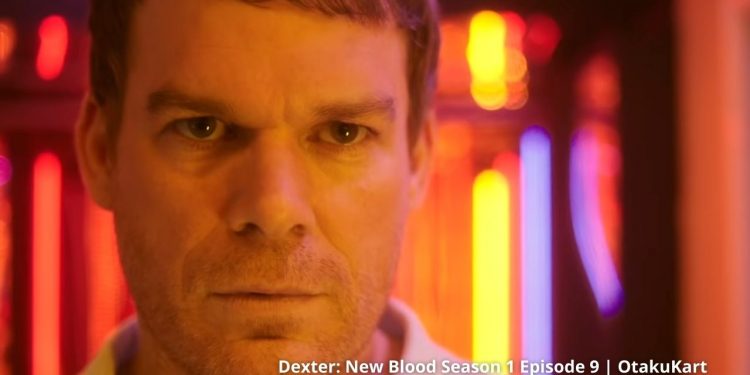 Dexter: New Blood Season 1 Episode 9 might see Dexter and Harrison coming closer than ever. With a serial killer on their tail, the father-son duo might have to team up like never before. If that is one thing to worry about, Dexter yet doesn’t know that even Angela is on his tail. Angela knows Kurt is a serial killer, but Molly’s suspicion of Jim’s behavior also struck a chord for her. So she wanted to dig more into that obituary and Dexter’s past before he became Jim, as well as an event that took place here when she was in New York.

So, recently Dexter: New Blood was building up its finale. Dexter found himself stumbling with Elric Kane kidnapping him while Kurt took care of Harrison. Angela found out about a drug bust involving Harrison and how Dexter reacted by trying to beat down the supplier. As she decided to chase this story, Dexter was running against time to save himself as well as his son Harrison from the wrath of Kurt. Here is a quick look at what went down.

Previously on Dexter: New Blood, we opened up with Dexter escaping from Kurt’s partner Elric Kane who had kidnapped him. Kurt had plans to torture Dexter by killing his son right in front of his eyes. While Dexter was busy running away from Elric, Kurt decided to make moves with Harrison and connect to him emotionally. Angela on her side was busy trying to connect the dots of suspicion on Jim. Something Molly made a note of and found it weird how Jim managed to track Kurt and her.

Kurt picked up Harrison and broke into the school. Throughout their conversation, in a way, he continued to grow hate inside Harrison towards his father. After some baseball lessons, that worked great for the start until it started hitting Harrison heavily. It brought all the negativity he has been facing for a while now. Meanwhile, Dexter came across an abandoned summer camp where he was able to find the weapons for fighting back.

Amidst all of this, Angela found out about the drug bust from Logan and how Dexter tried to beat the supplier for supplying it to Harrison. Confronting the drug dealer resulted in Angela finding out that Jim tried to inject him before beating him as the cops arrived. Dexter took care of Elric and was heading to find Harrison. He tried to contact him while Harrison was with Kurt at his home. Harrison did read the messages but didn’t trust his father leading him to turn the mobile to airplane mode.

In a matter of moments, Kurt showed up with a sniper and dressed in his killer suit. Harrison is thrown out of the house confused and asked to run. In no time, Dexter shows up and crashes into Kurt. Well, Kurt manages to escape, and luckily Harrison survives. Dexter finally opens up to Harrison about the urges of killing, which sees Harrison hugging him. At the same time, Angela was busy connecting dots of Jim and the Bay Harbour Butcher case.

Dexter: New Blood Season 1 Episode 9 is releasing on 2 January 2022. It is titled “The Family Business”. The official synopsis of the episode suggests that for the very first time in the season. Jim and Harrison are closer than ever as the father-son duo. Christmas did bring them together, and they are now under the radar of a serial killer. Meanwhile, Angela starts coming to a conclusion on how the town has become dangerous. Probably she found more about Dexter than ever and havoc this father and son could bring. Coming to Kurt, he is another threat to look at.