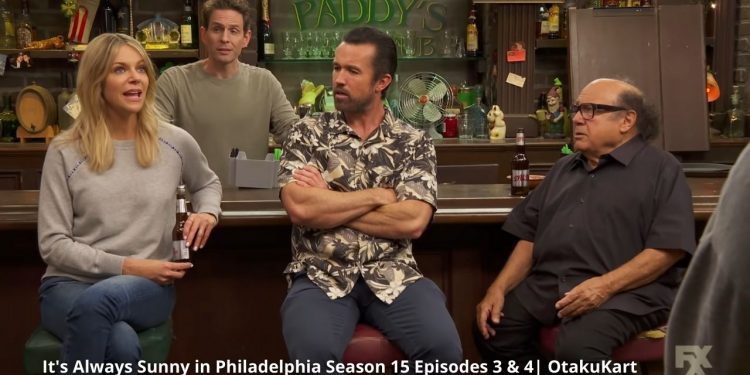 From The Promo For It's Always Sunny in Philadelphia Season 15 Episodes 3 & 4 Featuring Mac, Dennis, Dee and Frank

It’s Always Sunny in Philadelphia Season 15 Episodes 3 & 4 on one side takes us into the past while on the other with a gang member down. The first one sees Dennis learning for the very first time what Frank’s business is all about. The second, on the other hand, sees the group working towards finding a new member for Dee’s absences. Before we move to that, things went downhill for the gang when they found out that one of their favorite movies they did had been pulled from the local movie library. This called them for another action.

So the idea gang came up with was to make another movie in the sequence of the first six they made. The only difference between those six and this new one would be its adaptability. It will encourage the old generation as well as the new generation to come together and enjoy it. The problems like ‘actors not fitting in’, ‘some performing terribly’, and ‘Frank not getting what he wants’ came barging in. In the end,  they had to make a decision on how to pass it, so let’s find out what they did.

Previously on It’s Always Sunny in Philadelphia, we opened up with Frank angry. The town’s local movie library was pulling down Lethal Weapon 5 & 6 they made and he hated it. After tremendous discussion, the gang plans to look forward to the future rather than the past. So the mission is to make Lethal Weapon 7. So to make sure of its success, the gang plans to make a movie that can be seen and enjoyed by the audience of today’s ethical audiences.

The gang began shooting and saw Dee messing up the scene with Pepper Jack while Frank on his side only wanted his hot scene to be exciting. Coming to Pepper Jack, they didn’t even know what to suggest to him. So they brought in Artemis, to assist in directing the movie further. Now the second take saw them replacing Dee and Pepper Jack received a note from Artemis. Frank slows down and once Dee arrives, things go down and they cut the scene.

So, moving on they think even Pepper Jack isn’t fitting into this role. What they needed is Don Cheadle. So they didn’t know Don Cheadle but they knew someone who plays him. So the fake Don Cheadle replaced Pepper Jack, Pepper Jack replaced Dee and Dee replaced Frank. The gang believed it was working but at the end of the day, they come to the conclusion that it was garbage.

Mac believed that they can still make a movie for the young audience. He gave the gang an example of the women he dated in the past year. He understood the key is to regurgitate back to them. This way it will work. They crossed out that only Don Cheadle has knowledge about this movie. What they got, in turn, was him sharing his knowledge and nothing of their film during the screening.

Episodes 3 & 4 of It’s Always Sunny in Philadelphia Season 15 are releasing on 8 December 2021. Episode 3 is titled, “The Gang Buys a Roller Rink”. The official synopsis of the episode suggests that we are hitting back to the past. The time when Dennis learned the dark truth about Frank’s business. Dee will be aiming to touch new heights by going to Hollywood. Lastly, Charlie and Mac find their job’s at a roller rink at a risk in all-new It’s Always Sunny in Philadelphia.

Coming to It’s Always Sunny in Philadelphia Season 15 Episode 4, its title is, “The Gang Replaces Dee With a Monkey”. The official synopsis of the episode suggests that the gang will be busy finding a new member for Paddy’s Pub. Dee is menopausal and they need someone to fill in for her. Also, Dee puts her acting career on hold to train new aspiring actresses.