Death In Paradise Season 11 Episode 2 sees a murder at a golf club that may involve someone from Neville's own team. 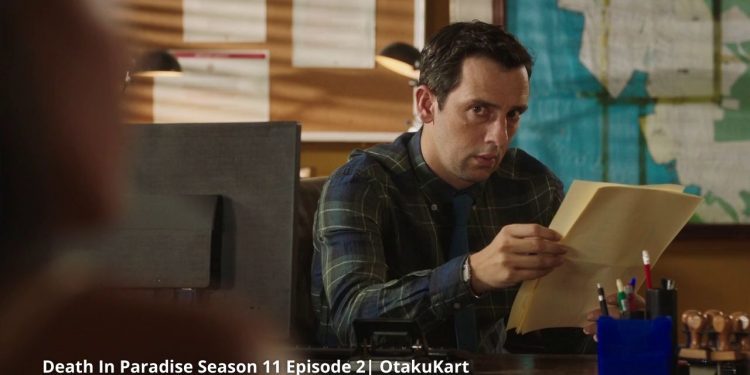 From Death In Paradise Season 11 Episode 1

Death In Paradise Season 11 Episode 2 sees Neville’s team’s Own being set up at a golf club murder case. But before we move to that, season 11 kicked off on quite a confusing ransom case for Neville’s team. A ransom where exchange of money went successfully with the person kidnapped coming home safely. Still, the middle person who was processing all of this had to die. For a minute, it felt like there was hardly any motive behind the killing.

Apart from the case, the Commissioner also introduced a new team member joining Neville’s team. Sergeant Thomas comes from a place where there was hardly any crime. It was her first murder case, and she wanted to make the best of the impression. Luckily, she found an amazing partner in the form of Officer Pryce, who made her feel welcome. So let’s begin with the ransom and murder case.

Previously on Death In Paradise, we opened up to see a couple trying to meet a ransom demand to save their daughter. The money was delivered, and the daughter was rescued too. But in the process, someone killed the father. Neville’s team was lost on the reason to kill the father named Mr. Gabriel. They had a ransom video, and analyzing the same resulted in Neville finding out the location of that place. On the same street lives the daughter, as in Clarissa’s boyfriend, Jason Clarke.

Jason Clarke came ahead to admit that, yes, the kidnapping part was his and Clarissa’s idea. Clarissa’s family was against them, and they decided to run off. Before that, they decided to take money from her father. But killing him wasn’t part of it, and he knew nothing about it. Later on, Neville came to find one of the pieces of Gabriel’s broken bracelets, which was far away from where his body. It just didn’t make sense.

Also Read: In Young Sheldon Season 5 Episode 11, He Spies on Mary Against Her Will!

Neville and Florence came to find out that even Gabriel’s wife Elizabeth has a criminal record. Talking to her and another news about Gabriel talking to a man on scar brought them to Otis Benjamin. Elizabeth’s ex and Gabriel was the one to send him behind bars. Otis was on the island, he admitted wanting to meet Gabriel, but he didn’t kill him.

Apart from all of this, the team also found out about Gabriel often being abusive. Still, there were traces of Otis’ blood on the knife that killed Gabriel. The team brought him in he went on to admit that he did go to confront Gabriel. But he got the best of him and kept the knife for himself. The next time he found the knife was near the body and scared he took it and ran away.

The episode came to a close, with Neville realizing it’s Clarissa who is the killer. Gabriel knows how to fight back. So when he went to give a ransom, he took Otis’ knife to catch the kidnapper. He found out about Jason but found out about his own daughter, shocked. For Clarissa, it was an impulse move to stab him. The team also later found out that someone killed Otis when he went back to Jamaica.

Death In Paradise Season 11 Episode 2 will release on 14 January 2022. The episode remains untitled. The official synopsis of the episode suggests that a long-lost brother returns to a family-run golf course. This celebration ends up in the discovery of a body. One of the prime suspects is from Neville’s own team, and although he/she may have an alibi, they may need to back off. Apart from that, we are wondering how Neville and Florence’s relationship continues after the weird quiz night they had for Commissioner.

Also Read: What Does Station Eleven Season 1 Episode 10 Has In Store For Us in The Series Finale?

Who Is Blake Horstmann Dating? Who Is The Reality Star Seeing These Days?