All Valley Championship came to an end, but LaRusso's mission is yet to finish and we wonder if Cobra Kai Season 5 will be the time it does. 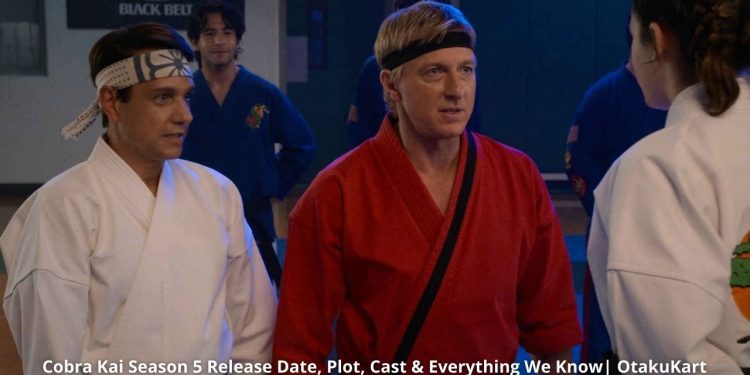 Cobra Kai Season 4 made its way to Netflix recently with high stakes as we were in for the All Valley Tournament. As the show came to a close, we not only had an unexpected boys champion but also the first-ever female champion. We saw happy faces and broken ones too. But, LaRusso’s main goal still remains unfinished. It had nothing to do with his students winning the tournament. All he wanted was to put an end to Cobra Kai, and we wonder if this mission would accomplish with another season. So here we are taking a look at Cobra Kai Season 5, its release date, plot, cast, and everything we know so far about it.

Before we dive deep into the coming season, we would like to take a quick recap on what went down during the last season. Thus, answering questions such as how Silver played behind the back. The reason Miguel decided to back off from the competition, and the face from the past who could play a major role in helping LaRusso accomplish his mission. So with no further adieu, here is what went down in Cobra Kai Season 4.

Previously on Cobra Kai, closing into the All Valley Finals, Miguel takes a backseat after he pulls his muscle away. He had 30 minutes to recover and return to the match. Instead, he decides not to go back and fight because he wasn’t fighting for himself. This mostly had to do with the failed connection he tried to make with Johnny. Towards the end of the episode, he leaves to figure out who he is. For that, he will go looking for his father.

Coming back to the All Valley Finals while Eagle Fang Karate was out, Robby smashed Eli in a match.  Everyone celebrated Robby, but he came to realize the worst about Cobra Kai when he saw Kenny beating his bully backstage. The same notion of Kenny followed him further in the match that saw him in a conflict with Terry. Soon it led to his defeat at the hands of Eli, who won the boys’ championship for Miyagi-Do Karate.

This wasn’t the end, though, as the girls’ championship was still in the balance. LaRusso’s priority was to put an end to Cobra Kai and its ways. For this, he decided to put all the past differences aside and reunite with his friend Johnny. They both decided to stand by Samantha as she went up against Tory Nichols of Cobra Kai. Towards the end, though, a few points of Samantha weren’t counted, resulting in Tory’s win. Despite a few DQ moves from Tory herself.

So, Tory became the first female champion of All Valley Tournament, but it had a conspiracy behind it. She later found out that Terry Silver had bought the referee who didn’t count Sam’s points. We are yet to find how she would react to it.

The season came to a close with Robby and Johnny coming to reconciliation and hoping to repair their relationship. Kreese came to realize how Silver saw him as a weakness. He soon kicked Kreese out by buying Raymond, who wanted to enter Cobra Kai, but Kreese didn’t accept him. Silver had beaten Raymond and asked him to blame it on Kreese. The season came to a close with the return of Chozen Toguchi to join LaRusso in an attempt to put an end to Cobra Kai.

Cobra Kai Season 5 Plot: What Could It Be About?

There are no official details on what Cobra Kai Season 5 would be about. But, the finale of Season 4 has already given us enough storylines that could be followed up moving on. For starters, LaRusso’s goal seems to be very clear. All he wants is to take down Cobra Kai and its unethical ways. The return of Terry Silver has only made it worst. The transformation of Kenny is an evident example of it. While Kreese had a change of heart but even he was put behind the bars with conspiracy Silver created.

So, Cobra Kai and Terry Silver are definitely having a lot of enemies moving into Season 5. Let’s not forget LaRusso is not alone in this quest. He has put his differences aside and joined hands with Johnny again. At the same time, a face from the past in the form of Chozen has joined the war too. Also, let’s not forget about Kreese. He may be behind bars, but he clearly stated that he is Cobra Kai. So he would definitely be planning to return to take back what is his from Silver. Lastly, we are yet to see how Chozen becomes an important piece of this war. Apart from him, we are also expecting more characters from The Karate Kid franchise to return as it has always been since the beginning of the show.

Coming to the other storylines, we are yet to see how Tory will react to Cobra Kai’s unethical ways. Will she align herself with Silver as he is the reason she became the first female champion? Well, that doesn’t seem to be the case, as we saw she cared for Sam towards the end of their fight.

We may see a team-up between Tory and Robby, who too has realized the same about Cobra Kai. This may lead them to help and change the heart of the place behind the scenes while the war between Silver and LaRusso, Johnny, and Chozen may go on the front. Lastly, we are also looking forward to finding out who Miguel’s father is. He has set off to find him, and we wonder what he is up to after all these years.

Also Read: Jacob Bertrand’s Net Worth: How Much is the Cobra Kai Actor Earning in 2021?

Well, the majority of the cast from Cobra Kai may remain the same for Season 5 as well. Unless we have some guests or characters from the past of The Karate Kid franchise returning. Let’s start with Ralph Macchio, who may return to fill in the shoes of Daniel LaRusso. Joining him would be William Zabka as Johnny Lawrence, Courtney Henggeler as Amanda LaRusso, Xolo Maridueña as Miguel Diaz, Tanner Buchanan as Robby Keene, and Mary Mouser as Samantha LaRusso.

The rest of the main cast we are expecting to return may include Jacob Bertrand as Eli “Hawk” Moskowitz, Gianni DeCenzo as Demetri Alexopoulos, Martin Kove as John Kreese, Peyton List as Tory Nichols, Vanessa Rubio as Carmen Diaz, and Thomas Ian Griffith as Terry Silver. Lastly, a return we already know for Cobra Kai Season 5 could be Yuji Okumoto returning as Chozen Toguchi, who was the big twist at the end of Season 4.

We are expecting Cobra Kai Season 5 to release in mid or late 2022. For starters, the filming for the fifth season has already wrapped up. We were originally aiming for a late release only but with most of the production work done. So it’s a matter of a month, Cobra Kai could catapult on the post-production work too. With that, Netflix could either rush by dropping the fifth season or could wait by the end of the year. The time where the new seasons of Cobra Kai are usually releasing since its shift to Netflix.

Before Cobra Kai shifted to Netflix, the show dropped its first season on 2 May 2018 through YouTube Premium (at that time, YouTube Red). Similarly, the second season followed in on 24 April 2019. Once shifting to Netflix, a similar gap followed in by the end of the year for the third and fourth seasons. Cobra Kai Season 4 came on 1 January 2021, while the fourth season recently was on 31 December 2021.

So, Netflix could either continue to follow a consistent gap and a schedule by releasing Cobra Kai late in 2022. If not, then it could even rush as the filming part of Cobra Kai Season 5 is already done. Also, there is a lot more story to cover. One of the producers, Josh Heald, has stated in an interview that there is a story beyond Cobra Kai Season 5. They are far ahead with the story after shooting for two seasons, and audiences are yet to see that story come to the screens.