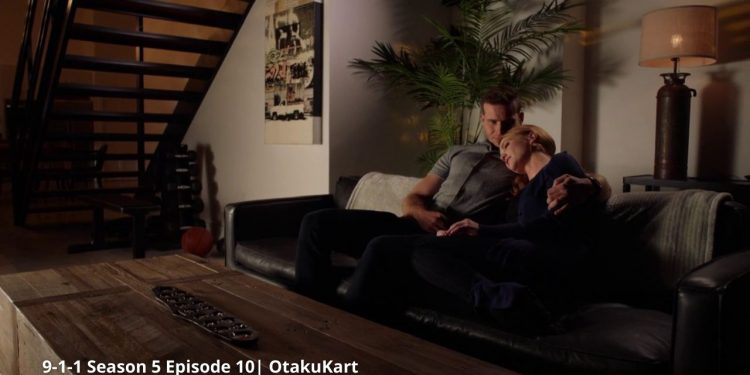 9-1-1 Season 5 Episode 10 brings Christmas to life for the team of 118. Just not in the way 118 was expecting it to be. Emergencies after emergency make their presence felt leaving the team busy and away from their family. Especially during the time, some of the members are struggling a lot. For example, Buck started believing that Taylor is trying to distance himself from her. Probably in no time, she is about to break up with him and he might really not like that. Buck’s friends suggested he should talk to her and he found out the problem was deeper.

Luckily, it was not him but her father the reason behind Taylor was acting out this way. Taylor’s father was having a hearing for the murder of a closed one. Apart from that, Henrietta met a man who seems to know her mother really well. It was in the past and a really complicated one. Henrietta took the shot by diving in and helping them find each other. Something that really didn’t fit with her mother. Here is a look at the outcome of these events before we move to 9-1-1 Season 5 Episode 10.

Previously on 9-1-1 Season 5, we opened up with a woman named Gaby taking her driving test. Joining her was her proctor, Chloe. Gaby was one of the talkers and as they drove, the street exploded right on their car. With mud and water surrounding them, Chloe saw a pen stuck in her chest and she was unable to breathe. Gabi stayed with her as she called 9-1-1. Bobby’s team got there in time but the car was over an oil well. With Chloe starting to spill blood, the team pushed the car away from the oil spill before they got her out.

Bobby and Athena were trying roleplay before May walked in while Buck thought Taylor is trying to distance herself from him. He shared his thoughts with his team and they think, all he needs to do is talk to her. The man they were going to rescue identified Henrietta as Antonia, Hen’s mother. Athena on her side was investigating a Casino robbery case from the late 1980s. It popped up again because of someone using a chip from back in the day.

Also Read: NCIS Season 19 Episode 9: The Crew Must Solve the Case with a Hologram

Bobby and Athena worked on the case together and found out that the robber fooled everyone by using an impersonator of his own. The impersonator and Robber had a huge difference in height. They suspected the manager and her history with the casino. Talking to the Santa who used the chip revealed that it was his dad and his partner was none other than the same manager. Thus leading to confession.

Buck tried to talk to Taylor and she, in turn, revealed about her father’s parole hearing. When her mother died, it was ruled out suicide but then her father was arrested and he might be behind it. Buck drove all the way to prison to support her but she didn’t know if she should support her father as she wasn’t present at those events. Gaby stayed at the hospital for her new proctor friend Chloe. Also despite denying it at first, Henrietta’s mother gave her old friend a second chance to make things right.

9-1-1 Season 5 Episode 10 is releasing on 6 December 2021. It is titled,” Wrapped in Red”. The official synopsis of the episode suggests we are in for a Christmas celebration. So probably the team of 118 will be out there celebrating with friends and family. It seems like the fun won’t last long as they are called in for a number of emergencies including a woman trapped in an elevator to a man hit by a truck. The official synopsis also mentions Eddie struggling with Charlie. Check out the official promo for 9-1-1 Season 5 Episode 10 below.