Who is Bradley Simpson’s Girlfriend? Who Is The British Pop Singer Dating? 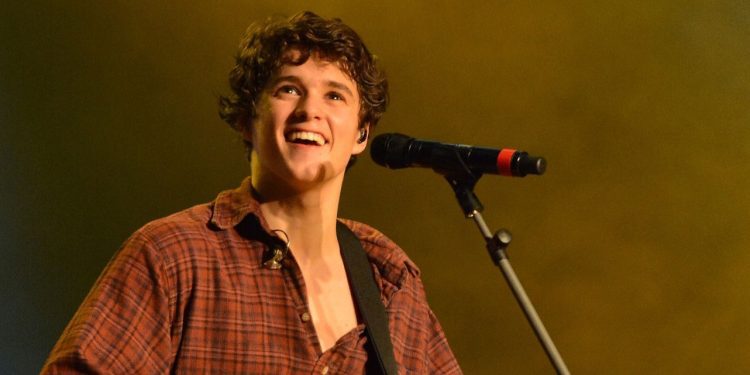 Bradley Simpson, who has an endearing personality and is a bright young guy, is said to have had success in finding love. Many girls must have approached him because he has such a wonderful career and gained so many fans and followers, but none of them have been able to win his heart. As a result, we will learn about Bradley Simpson’s Girlfriends in this post. Is he going to focus on his career, or are the rumors about him true? Let’s see what we can find out! Bradley Simpson is a popular British pop singer who goes by the name Brad Simpson.

Simpson is mostly known for being the lead singer of ‘The Vamps,’ a British rock/pop band. He also plays rhythm guitar in this band, where he collaborates alongside lead guitarist James McVey, bassist Connor Ball, and drummer Tristan Evans. Brad Simpson was welcomed to this world on July 28, 1995, by English parents as Bradley William Simpson. He grew up in the Royal Town of Sutton Coldfield in the United Kingdom. Natalie, his older sister, is on her way to becoming The Vamps’ first official photographer. Jesse is the name of Simpson’s dog.

Simpson, who is also noted for his adorable features and charming smile, first expressed an interest in music when he was a baby. He aspired to be one of the world’s most famous artists and singers since he was a child. After joining the band The Vamps with a few other promising singers in 2012, the young man was given the opportunity to show off his ability to the rest of the world. Simpson has become one of the most popular pop singers in recent years. On social media, the British singer has a sizable fan base. He currently has 1.4 million Instagram followers and 1.7 million Twitter followers as of 2021.

Who is Bradley Simpson’s Girlfriends? Bradley Simpson is known to be one of the world’s most attractive men. It’s no surprise that the young actor has a sizable female fan base worldwide. Simpson is now dating Gracey, a British singer, in his personal life. Gracey had made her breakthrough in 2020 with the BRIT nominated single “Don’t Need Love,” which she co-wrote with 220 Kid.

The song went on for two weeks at number nine on the UK Singles Chart. He was formerly linked to Lauren Jauregui, a member of the “Fifth Harmony” group. In 2014, the couple dated for almost a year. According to Bradley Simpson’s girlfriend, they broke up the next month, in January 2015. Bradley began dating Gracey in the year 2020. There is no additional information on Bradley Simpson’s girlfriend because he looks to be a very private person who does not want to talk about his personal life.

Bradley Simpson And His Blind Date:

Going on a date with someone you don’t know is always risky, especially when you aren’t permitted to be selective. Bradley joyfully went on a blind date with a stunning woman named Isobel on television in 2016. This event left a lasting influence on the public, as well as the fans. “There’s been moments where you can’t let that kind of hazy judgement of people; you just kind of go and take people as they are,” he later said of the encounter.

“I was incredibly nervous… far more nervous than anything I’ve ever done,” he remarked of going on a blind date. To be more specific about his feelings towards dates, he stated, “I am way more afraid going on a date than I am going in front of a crowd.” However, we might consider it from a different perspective. This had to have given him some confidence as well as experience.

In 2012, Brad Simpson joined the boy band ‘The Vamps.’ The next year, he and his band members released their first original song, “Wildheart,” on YouTube. The famous band released the music video for their debut single ‘Can We Dance’ on August 6, 2013. In just two weeks, this video had over a million views! It also came in second place on the UK Singles Chart. On January 19, 2014, Simpson and his band released their second song, “Wild Heart.” This song reached number three on the UK Singles Chart.

After that, they released their third song, ‘Last Night,’ which reached No. 2 in the UK. ‘Meet the Vamps,’ their debut studio album, was released in April 2014 and was a huge success. ‘Somebody to You,’ for example, was one of their biggest hits. In May 2014, Simpson’s band released a new version of the song “Somebody to You” as their first official single in the United States, followed by an EP of the same name in August 2014.

The singer then released his second studio album, ‘Wake Up,’ in November 2015, in partnership with his band. Simpson and his band recorded a track for the animated film ‘Kung Fu Panda 3’ the following year. That year, they also released the first song off their third album, ‘All Night.’ ‘Middle of the Night,’ their second single from the upcoming album, was released in April 2017. The band was featured alongside Sabrina Carpenter and Mike Perry on ‘Hands’ in May 2017.

Why did Ian Paget and Chris Olsen Break Up? Update for The Tiktok Couple