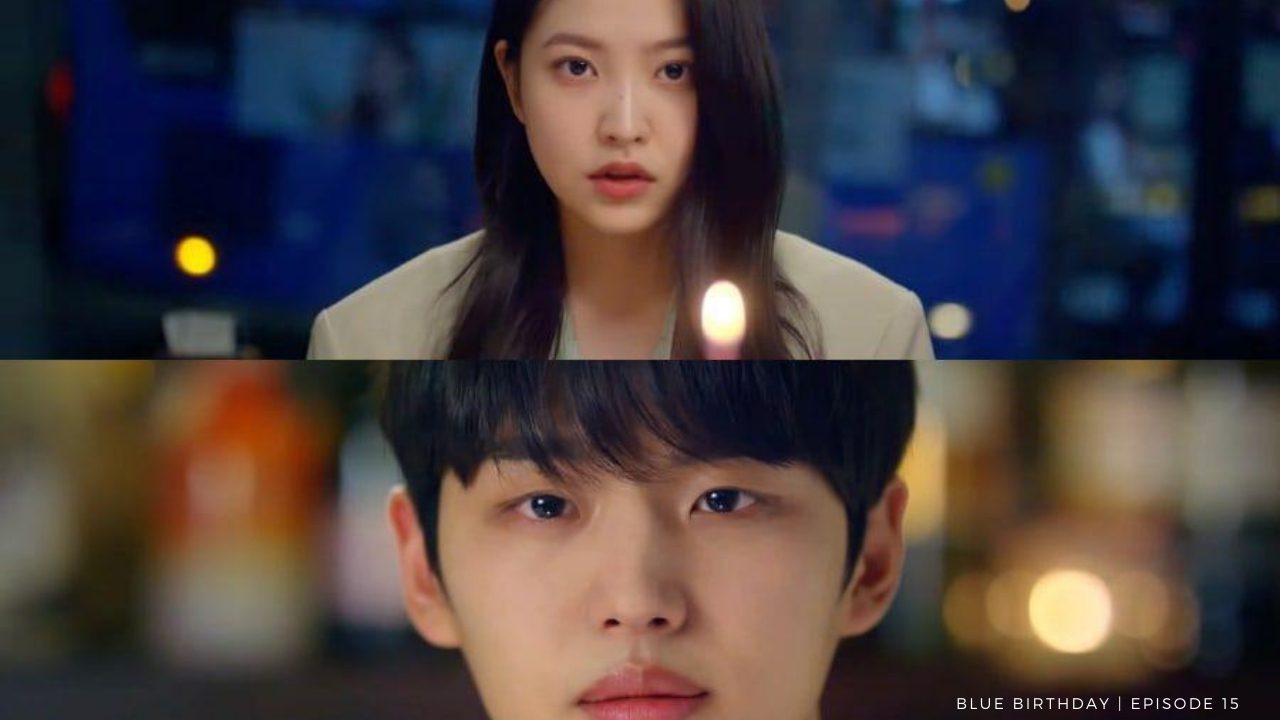 Blue Birthday Episode 15 is the penultimate episode in this fantasy-thriller K-Drama with a star-studded cast. Starring Yang Hong Seok of Pentagon and Kim Yerim of Red Velvet, Blue Birthday is every K-Pop stan and K-Drama fan’s dream come true.

The main plot of Blue Birthday revolves around the lives of a group of students who have lost their friend to suicide. 10 years down the line, Oh Ha Rin, whose birthday also happens to be Ji Seo Jun’s unfortunate death anniversary, comes across 9 photographs. All of these pictures were taken by Ji Seo Jun. However, these are no ordinary pictures. It turns out that all of these images have the power to send the person who burns them back in time.

Ha Rin decides that she will use this opportunity to find out what exactly happened to Seo Jun. After all, he was a young boy with no reason to take his own life. In the process, however, Ha Rin ends up changing the past too many times. It must be understood that if one person is brought back to life, someone else needs to be sacrificed in their place. So far, as the story has turned out, we see that Ha Rin sacrifices herself.

In Blue Birthday Episode 15, we will see that, in all possibility, Ha Rin probably does end up saving Seo Jun. However, in this process, she loses her own life. As far as we can recall, Hye Min burnt the last picture that Ha Rin had left with her. And in the previous episode, Ha Rin falls off the terrace. The question that now remains is whether Seo Jun can do anything to protect Ha Rin and get her back in life. And whether Hye Min will be punished for all her crimes and envy towards Seo Jun.

Blue Birthday Episode 14 starts exactly where the previous episode ended. We see Ji Hye Min and an injured Oh Ha Rin trying to fight over the last magical image that Ha Rin has left to time travel. Both of them are sent back to the day of Ha Rin’s birthday 10 years back. While Ha Rin is in school, Hye Min is in police custody with handcuffs around her wrists.

Hye Min goes hysterical and tells the police officer that she wants to use the washroom. She makes this request after she realizes that the police still haven’t found any evidence of her crime. Hye Min escapes the police station and reaches the main road where she hails a cab to school. In the meanwhile, Ha Rin realizes that Hye Min will try to erase all evidence of her crime. Seo Jun is in the hospital with his mother who has fainted after his sister was arrested. Ha Rin calls Seo Jun and informs him about her theory regarding Hye Min. She, along with Seo Jun, starts looking for the carving knife that Hye Min used to kill Sinu.

Hye Min is back in school by then. She calls Seo Jun to the rooftop using Ha Rin as an excuse. Ha Rin, on the other hand, has managed to find the carving knife that Hye Min must have used for the murder from a student of the Art Club. She receives a call from Seo Jun when he gets the information that she is looking for him. However, Ha Rin misses the call.

Ha Rin tried to call Seo Jun back but she receives no reply. Seo Jun texts her saying that he has found the evidence and should meet her on the terrace. However, it is not Seo Jun texting her at all, but Hye Min. After Seo Jun reaches the terrace, Hye Min injects him with animal poison, causing him to lose consciousness. Hye Min holds Seo Jun hostage on the terrace with a knife to his neck.

Ha Rin realizes that something is wrong with Seo Jun even before she reaches the terrace. She asks herself why all her bad hunches come true. As she reaches the terrace, Ha Rin is appalled to see Seo Jun and Hye Min together. She tries to stop Hye Min from doing anything to Seo Jun. But, the latter tells Ha Rin that she needs something from her in return.

Ha Rin kicks the knife towards Hye Min. But she, being the petty person that she is decides to harm Seo Jun anyway. In an attempt to stall Hye Min till Seo Jun regains consciousness and can protect himself, Ha Rin tries to talk to Hye Min. Hye Min says that she believes that Seo Jun does not deserve to live because he is just a substitute for her. Hye Min clearly has massive abandonment issues which have caused her to behave this way. After Seo Jun wakes up, he pushes Hye Min away. She tries to attack him again but Ha Rin gets to her first and the two of them fall off the railing. The episode ends with Seo Jun wailing on the terrace after we can hear ambulance sirens in the background.