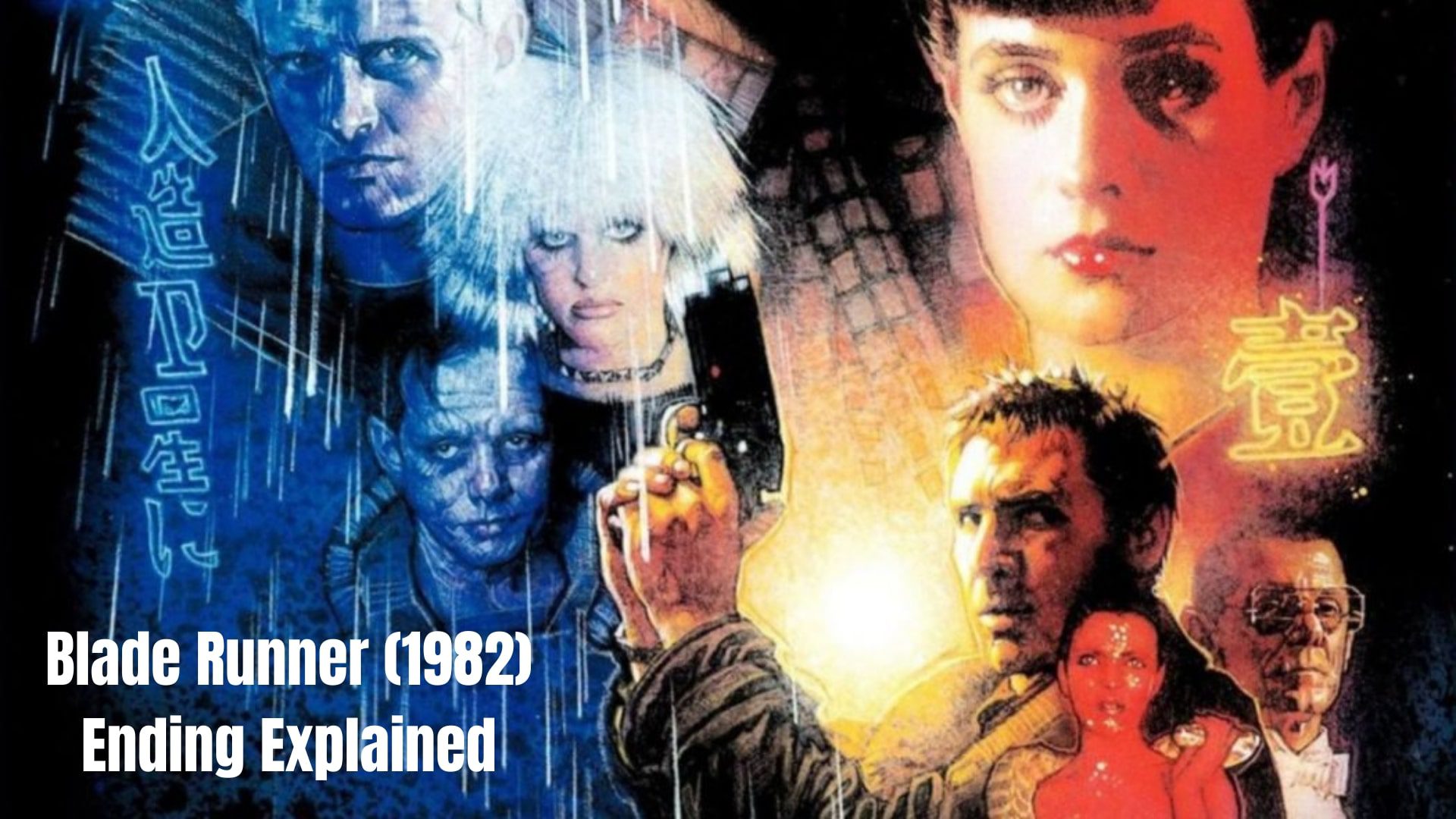 Blade Runner (1982) is one of the classic tech-noir films that would leave you wondering about a ‘maybe’ dystopian or destructive future. The film is set in an anti-utopian future where synthetic humans, also known as replicants, are bio-engineered by the ruling Tyrell Corporation. They are created to work at space colonies. However, things turn upside down when a group of four advanced replicants escapes space and returns to Earth to find their creator. To eliminate the fugitives, the burnout cop unwillingly agrees to hunt them down.

The 1982 Blade Runner sci-fi action film is directed by Ridley Scott and written by Hampton Fancher and David Peoples. It stars Harrison Ford, Rutger Hauer, Sean Young, Edward James Olmos, etc. It is adapted from the 1968 novel titled Do Androids Dream of Electric Sheep? by Philip K. Dick. Initially, the film received many criticisms for its thematic complexity, visuals, slow pacing, and lack of action. But later, Blade Runner became a foremost example of neo-noir cinema. The movie brought huge changes in the science-fiction genre, influencing various films, television series, and games. Even the sequel ‘Blade Runner 2049’ was released in October 2017. The movie has left many open questions for the audience about the future of humanity.

Blade Runner 1982 is a sci-fi action movie questioning the uncertainty that blurs the line between humanity and replicants. The film is set in a dystopian future that is on the verge of losing its last ounce of humanity. In this period, human creates artificial humans, which we all call replicants. They are bio-engineered by the powerful Tyrell Corporation to serve in space colonies. But the cycle abrupts when a group of four violent androids escapes and returns to Earth to find their maker. That leads to an ex-policeman Rick Deckard going on a special mission to eradicate all four fugitives. However, as his mission advance, he begins questioning his own identity. Blade Runner leaves a deep impression if you enjoy watching a sci-fi theme with a great plot! The movie has displayed aesthetically a dystopian future which we may or may not face.

The Cast of Blade Runner

The film stars various talented and outstanding artists who portrayed their characters excellently. In Blade Runner, we have Harrison Ford as Rick Deckard, a cop, who is on the trail to terminate the runaway advanced replicants. Rutger Hauer as Roy Batty, who steals the film in the ending. Sean Young as Rachael, a replicant who falls in love with Rick Deckard. Edward James Olmos as Gaff, who left with many answered questions. The other supporting cast members include M. Emmet Walsh as Bryant, Daryl Hannah as Pris, William Sanderson as J. F. Sebastian, Brion James as Leon Kowalski, etc. Each character brings different shifts to the storyline, making the film worth your time.

Blade Runner’s so-called Nexus-6 replicant Roy Batty has his own story that ends with an expected yet unexpected turn. Roy, a replicant with a four-year lifespan, wants to prolong his life. Therefore, with that intention, Roy visits his maker Dr. Tyrell. Dr. Tyrell, a human, is more apathetic and nonchalant than a replicant like Roy. When Roy demands Dr. Tyrell to increase his lifespan, he rejects the demand very nonchalantly, telling him that it is an impossible thing. Roy, who has been doing all things for Dr. Tyrell, seems to throw out like a piece of garbage that does not hold any value to Tyrell. It shows as if Dr. Tyrell does not possess any human emotions towards replicants. In rage, disappointment, sadness, Roy expresses his emotion by kissing Dr. Tyrell and kills him. As if showing anger, grief towards the parent who disappoints their child.

Why Do Roy Kill Dr. Tyrell But Save Deckard?

Roy brutally kills the maker, who was like a god/parent to him, by gouging his eyes out, crushing his skull. His cruelty expresses his rage, desire to live, and wrath for cursing him with this mortality. After killing Dr. Tyrell, Roy kills Sebastian mercilessly. Sebastian was equally responsible for generating this curse of producing replicants who were always treated as a commodity, an emotionless machine, a slave to humans. They do not hold any value as long as new replicants are created. Every emotion Roy show seems to make him more human than a real human being.

Knowing his short lifespan and after seeing Deckard killing Pris, Roy chases Deckard, running through the line of buildings, and they end up on the rooftop. When Deckard tries to jump to another roof, he fails and hangs on the edge. Roy easily jumps to the next roof, and before Deckard could slip, he hoists him up to save him. By the end of Blade Runner, Roy dies. He delivers a monologue about how his memories of this life ‘will be lost in time, like tears in rain’. Roy’s character showed every feature that a human should do. He only wanted to exist in this cruel, ruthless world that held no value of his existence. His character excellently displayed empathy, desire to live, understand the value of life. This makes us realize how sometimes we humans act like emotional muted beings when even a replicant can feel the beauty of life. Roy saving Deckard at the end of Blade Runner shows that he values life, empathy for the person who stole everything from him. Even though he spent his whole lifespan doing opposite things, in the end, he understands the real purpose of life, whether it be human life or replicant life.

Why Does Sebastian Die in Blade Runner?

There is no significant reason behind Sebastian’s death. We could say Sebastian took the blow of Roy’s anger, pain, betrayal. After Dr. Tyrell rejecting Roy’s demand to expand his lifespan, he kills Dr. Tyrell, his creator/maker who began this curse of the miserable life of replicants. Even though Sebastian seemed faultless in this content, he was involved in designing their neural route. That gives enough reasons for Roy to kill off Sebastian since he was no different than the real culprit.

What Does The Origami Unicorn Signify At The Ending Scene?

The silver origami Unicorn at the end of Blade Runner could signify various directions. First of all, it could link with Rachael. A unicorn has been symbolized as purity, virginity which we can tie up with Rachael’s status. Also, Unicorns are extinct, which again we can link to Rachael’s lifespan. Second, it possibly has to do with Deckard. As Deckard had dreamed of a unicorn before. But it will be impossible for Gaff to know Deckard’s personal thoughts unless Deckard is a replicant. As Deckard could read Rachael’s memory file, Gaff could do so if only Deckard is replicant. This topic of discussion we will leave for later.

Lastly, we can conclude with a simple note of Gaff sparing Rachael’s life. In the previous scene, we see Gaff shouts to Deckard that Rachael will not be able to live and all. So, we can conclude that Gaff was there to finish off Rachael but did actually did. Why? That would be another riddle to solve for another day. Bonus Point- At the end, Deckard leaves with Rachael to begin a new life. He finally learns to value life and wants to spend his remaining time with the love of his life.

In Blade Runner, Is Deckard A Replicant Or Not?

The highlighted question of Blade Runner is whether Deckard is a replicant or not. By the ending of Blade Runner, everyone wonders about Deckard’s identity. This question leaves room for many possibilities. First of all, Gaff leaving the origami unicorn at Rachael’s place could hint that Deckard is a replicant. Otherwise, Gaff would not be able to know about Deckard’s personal thoughts. Second, there have been many debates on the same topic. Some possibilities indicate that Deckard could be Nexus-7, a new generation replicant without any superpower or intelligence but a perfect replica of humanity.

However, Harrison Ford, who played Deckard, believes there should be left at least one human in this entire film of replicants. On the contrary, Scott indicates Deckard is replicant in various interviews. However, is there really any difference between Human and Replicant? In the end, the film intends to show the ambiguity that blurs the line between humans and replicants. Whereas we see Roy and Rachael, who were replicants showed more human tendencies and emotions than Deckard, who was human yet was emotionally detached.

Deckard is replicant or not, is left up to the audience to decide. If you believe Deckard is a replicant, he is, or if you do not, he is not. Blade Runner left quite a strong impression on the views with its unique and fresh storyline, presenting the beauty of humanity that exists even in non-human beings. If you want to rewatch this stunning movie, it is available on Amazon Prime Video.